Civil War: The Fall of Richmond

Lee flees, the city burns, and the liquor is literally flowing in the streets during this milestone day in our city’s past. It was the morning of April 2nd, 1865, and Confederate President Jefferson Davis sat alone in his usual pew at St. Paul’s Episcopal Church. As Reverend Dr. Charles Minnigerode preached a sermon on the Last Supper, one of the church sextons handed Davis a note from the War Department. He remained seated for a moment as he read the contents of the note, then rose up and walked down the center aisle and out of the church. Several minutes later, as Minnigerode began communion, the sexton approached several other high-level Confederate officials, who quickly exited the church as well. A murmur swept across the congregation–something important was happening, and it likely wasn’t good.

Davis’s note was a telegram from Robert E. Lee at the front lines outside Petersburg. And it was actually the second telegram the Confederate President had received this morning. Just before attending church, he’d been handed a message from Lee that stated, “I see no prospect of doing more than holding our position here till night. I am not certain I can do that. I advise that all preparation be made for leaving Richmond tonight.” For reasons unknown, Davis remained unbowed as he continued on to St. Paul’s. It was the second telegram which drove him to action:

“I think it is absolutely necessary that we should abandon our position tonight. I have given all the necessary orders on the subject to the troops, and the operation, though difficult, I hope will be performed successfully. I have directed General Stevens to send an officer to Your Excellency to explain the routes to you by which the troops will be moved to Amelia Courthouse, and furnish you with a guide and any assistance that you may require for yourself.”

After leaving St. Paul’s, Davis rushed to the War Department offices on 9th Street and gave the order to evacuate the city by nightfall. For days now, the Confederate government had been planning for a possible evacuation of the city, prepping boxes of files and paperwork, arranging for transportation, and all the things one does when attempting to move an entire government to a new location in wartime. The Confederates intended to relocate the capital to the city of Danville, a southern Virginia city near the North Carolina border, and most importantly, along a critical railroad line from Richmond. Despite the days of preparation, the new deadline created chaos among the many clerks and officials preparing for immediate departure.

By afternoon, most of the populace had heard of the evacuation order and panic ensued in the streets. If the Confederate government was leaving Richmond, so too was the Confederate army that defended the city. The realization that they would soon be occupied by the enemy drove fear into the hearts of the white population. The city council, in an attempt to control the situation and minimize rioting, ordered the destruction of all whiskey and other hard liquors throughout the city. The plan backfired tremendously. The police raided warehouses and stores of hard liquor throughout the city, smashing the barrels and letting the liquor drain into the streets. It didn’t take long for astute citizens looking to forget their misfortune to realize that a simple dip of a hat or hands into the gutter led to free whiskey for all courtesy of the Richmond city council.

By the time nightfall arrived, most of the government had now cleared out of the city en route to Danville. Jefferson Davis bid farewell to the White House of the Confederacy and, as if still hoping for news of a reversal of fortune from Lee, waited until 11:00 PM to board the presidential train. After midnight, the looting and lawlessness really began to increase as whiskey-fueled mobs broke into supply warehouses and smashed storefront windows. The people of Richmond had hit their breaking point–and the discovery of previously-hidden supplies of food and provisions (while the populace was starving) only served to enrage them more. There were still soldiers in Richmond, but they weren’t equipped to stop the mob–in fact, they actually had orders to join in the destruction.

The commanding officer in charge of the city’s defenses, Gen. Richard S. Ewell, had ordered soldiers to burn warehouses filled with tobacco in order to prevent them from getting into Union hands. In the middle of the night, they torched multiple warehouses in the business district. These warehouse fires, combined with smaller fires started by looters, soon spread out of control when wind picked up the flames. Soon, an entire third of Richmond was on fire. On the James River, soldiers packed their ironclad ships full with munitions and set them aflame as well. Huge explosions rocked the city and were felt even as far as Union picket lines outside the borders. One Union officer wrote: “The earth shook where we were and there flashed out a glare of light as of noonday, while the fragments of the vessel, pieces of timber and other stuff, fell among my pickets, who had not yet moved from the position where they had been posted for the night watch.” One can only imagine citizens hiding in their homes, smelling the smoke, hearing drunken mobs, windows blasted out by massive explosions on the water–it must have sounded like Richmond was being destroyed by a massive Union force. Alas, it was just the Confederates tying up loose ends. 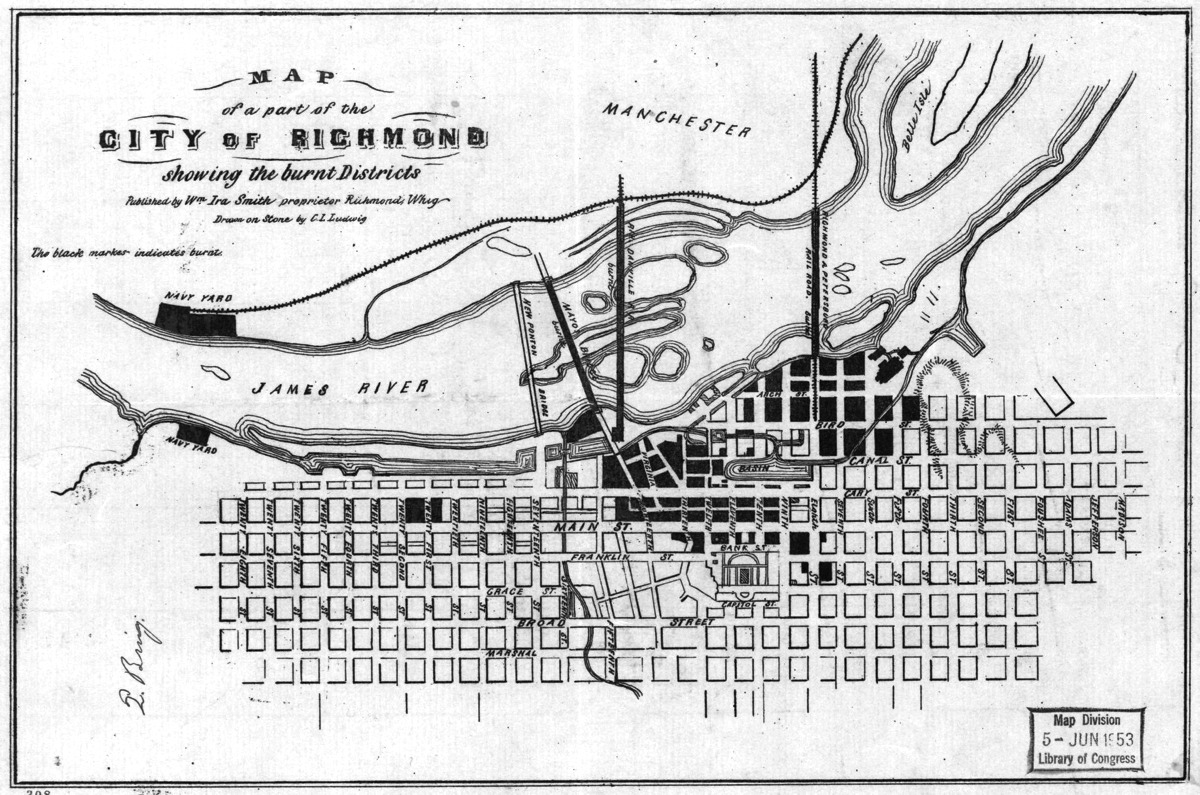 The final loose end, Mayo Bridge was the last remaining bridge south across the James River and the key to preventing Union forces from chasing after the fleeing Confederates. As dawn broke in the still-burning city, the order was given to destroy the bridge: “All over, good-bye, blow her to hell!” Even as one end of the bridge burned, a few straggler Confederate soldiers ran through the flames and across the structure mere moments before collapse. Without a minute to spare, soldiers in blue uniforms could be seen streaming into the city from Rockett’s Landing as the bridge was engulfed in flame.

Union Gen. Godfrey Weitzel sent a telegram to Gen. Ulysses S. Grant that morning: “We took Richmond at 8:15 this morning. I captured many guns. The enemy left in great haste. The city is on fire in two places. Am making every effort to put it out. The people received us with enthusiastic expressions of joy.” Weitzel was perhaps referring to Richmond’s enslaved population, who now found themselves free, but given the horrors of the night before, surely the rest of Richmond’s citizens felt a mix of sorrow and relief as Union soldiers rushed to help put out the fires throughout the city.

It was over. Richmond had fallen.

April will be the final month of this Civil War series–much of the important stuff happened right here in Richmond! Check back often for the last few real-time installments of our four-year-long series (including one this very Monday!). Do you have catching up to do?