On this day, 150 years ago, Lincoln was inaugurated YET AGAIN. The Civil War’s axles were about to break, and the man who had been elected to deal with the situation was about to see it through. As a person who likes story arcs that tie up nicely in neat little bows, I find something deeply satisfying about Abraham Lincoln’s second inaugural address, which took place 150 years ago on March 4th, 1865. Lincoln’s first inauguration had been exactly four years prior, as the United States was on the verge of war, in the midst of trying to find a political solution during those weeks leading up to the first shots fired at Fort Sumter. Lincoln was a new untested president about to face something no president had faced before him. Now, four years later, that same war was finally winding down, and Lincoln was set to address the nation yet again, only weeks away from a reunited Union. You can only imagine what he was feeling after those long four years, so close to realizing his goal.

The two inaugural addresses feel very different in tone. In 1861, Lincoln was attempting a firm stand in opposition to secession while at the same time trying to appease southern concerns about slavery’s footing. In 1865, Lincoln’s address was much shorter–just 703 words–and felt much more like a sermon than a political speech. Having just recently passed the 13th amendment abolishing slavery, Lincoln focused primarily on the end of slavery as an institution and providing assurance to the southern states that he would welcome them back to the Union. With multiple biblical quotes and references to God, Lincoln made the case that divine authority was the driving force behind ending slavery and reunifying the broken nation. It ended with perhaps one of his most famous lines:

With malice toward none, with charity for all, with firmness in the right as God gives us to see the right, let us strive on to finish the work we are in, to bind up the nation’s wounds, to care for him who shall have borne the battle and for his widow and his orphan, to do all which may achieve and cherish a just and lasting peace among ourselves and with all nations.

A roar of applause shook the air, and, again and again repeated, finally died away on the outer fringe of the throng, like a sweeping wave upon the shore. Just at that moment the sun, which had been obscured all day, burst forth in its unclouded meridian splendor, and flooded the spectacle with glory and with light.

Here in the modern day, we have a tendency to idolize Lincoln as president, to almost think of him as divine. With glowing reviews like that (and a helping hand from mother nature, who literally made him seem larger than life), it’s no wonder that we do.

Not everyone in the audience was moved by Lincoln’s words. Just a few yards away from Lincoln stood an actor and southern sympathizer by the name of John Wilkes Booth. As he watched the president’s speech from a nearby balcony, Booth, with the help of several co-conspirators, was orchestrating a plot to assassinate Lincoln in a last-ditch effort to save the Confederacy. In fact, several photos taken during the inauguration show both the president and his soon-to-be assassin. The next time the two would be in such close proximity would be 41 days later at Ford’s Theatre, and the end of that production would not result in applause. 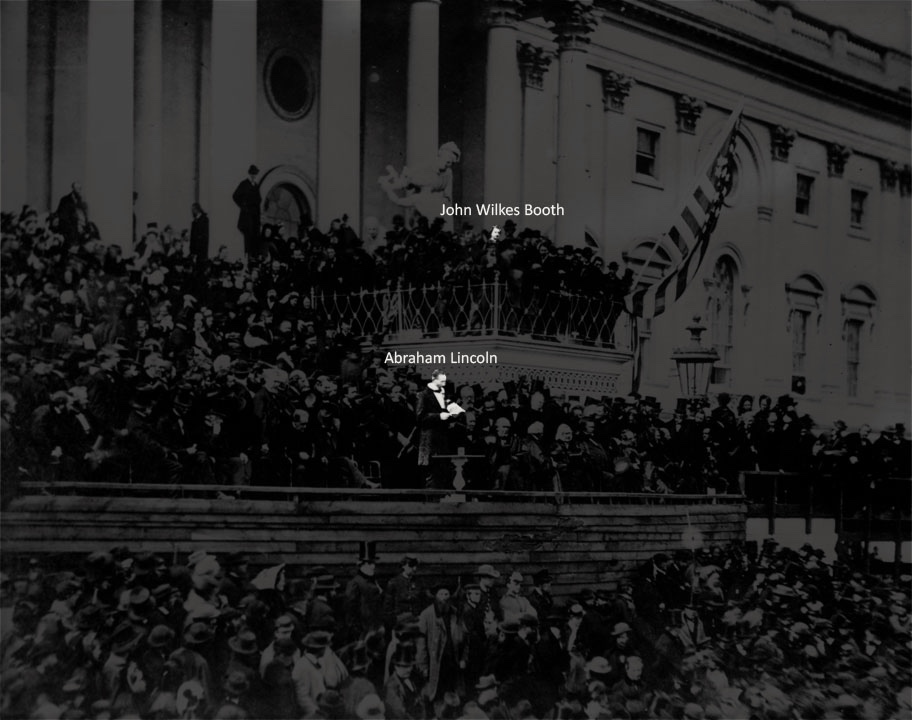 April will be the final month of this Civil War series–and a lot of the important action of that last month occurred right here in Richmond, so we’ll be doing four stories next month and posting them as close to real-time as we can, so be sure to stay tuned for the thrilling conclusion of our four-year-long series!