Bombolini pasta to open in the Fan

Richmonders will have a new way to get their fresh pasta. After years of selling a variety of their pastas through Ellwood Thompson’s and local farmers’ markets, Bombolini is about to open a take-out pasta shop for both lunch and dinner patrons. What pasta flavors can we expect, and how does a dachshund fit in?

Dishes: A rotating list of pastas will be available. Past pasta flavors have included jalapeño, tomato basil, tomato and spinach, and even chocolate. Pasta types (i.e. spaghetti, rigatoni, fusilli) will also change. Homemade sauces, as well as homemade vinegar, will be available alongside an antipasto bar. Pasta are made egg-free, and gluten-free versions will be available.

In a few days, Bombolini will officially open its doors to Richmond, providing freshly made pasta, sauces, and vinegars from the Fan. I talked with owners John and Lolita Kreckman one morning while they put the finishing touches on their new property. While not zoned as a restaurant (parking allotment issues), John tells me that their takeout pasta business will be “more along the lines of a European-style deli.”

The name Bombolini comes from an oval-shapped pasta, but the company’s logo is very much inspired by the dachshund named Mopsis that patters around the nearly finished space. Mopsis seems a bit wary of me–tail wagging and heart thumping in his small noodle frame. But it’s not just me he’s wary of, it’s also the random electricians, city officials, and workers that are coming in and out of the West Main Street storefront. Bombolini is, in certain ways, his after all. “He’s the mascot,” says John. 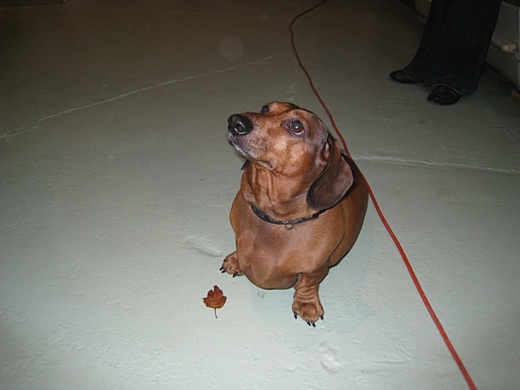 While “hot dogs” and “wieners” are how we typically describe dachshunds, in Lolita’s Latvian heritage this elongated breed of dog is referred to as a “spaghetti” dog. Although Mopsis doesn’t know it, it’s the little dachshund’s image that serves as Bombolini’s logo. It’s also how many identify the particular brand of fresh pasta. “People know the dog,” says Lolita with a Latvian accent, smiling. 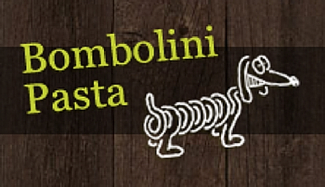 The walls of their first storefront are exposed brick, and a white, vaulted ceiling–replete with a large sky light–rises above us. It feels less like the store of a venditore di pasta and more like a loft for a sophisticated urbanite. Although records are hard to come by, John and Lolita have heard from several sources that their new store—previously Ecologic—once served as a stable for Richmond Police horses. The spacious room allows for the necessary pasta-making equipment, gas burners, a wine rack, and an antipasto bar.

John and his wife, have already built a following in and around the city. Their unique pasta can be purchased at Ellwood Thompson’s, Farm to Family, and a handful of local farmer’s markets throughout the area. The origins of the Kreckmans’ pasta venture, however, aren’t local or even from a place remotely Italian.

While living in Key West, Florida, Lolita worked at an Italian restaurant where she learned that she had both a propensity and predilection for pasta making. In 2008, she and John came to Richmond to visit family, and planned all the while “on going back to the Keys.” Plans changed, and the two decided to stay in Richmond, ultimately buying a house here. When Lolita became pregnant, both she and John thought that making pasta would provide Lolita with a way to work from home while caring for their daughter. Having a culinary expert around didn’t hurt, either. 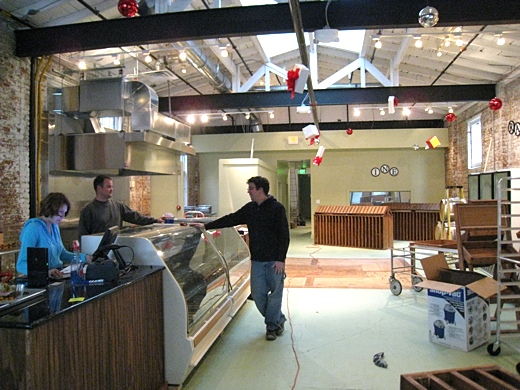 John graduated from one of the leading culinary schools in the country, Johnson & Wales, in 2003. “I was trained in classical French.” However, “everybody’s healthy” these days, leaving little demand for the very unhealthy classic French cuisine. John, though, is not bitter. Instead he combined his culinary knowledge with Lolita’s to create a pasta business that has gone from homemade to a full-fledged pasta grocery in just their third year of operation.

“Ninety percent of the world,” John tells me, has eaten boxed pasta. Most, it seems, think of pasta as being only a dried, pre-packaged food. The blandness of dried pasta forces people to “cover it with a lot sauce,” John says. This is where Bombolini does things differently–they add actual flavor to their pasta. Past flavors have included jalapeño, tomato and spinach, tomato basil, and even chocolate (a big hit with children). During one Halloween, the couple used pumpkin and squid ink to create orange and black pasta. John freely admits to being open for “trying anything once—maybe twice.”

When Bombolini opens there will be five or six pasta flavors available. In addition to the flavors, John and Lolita will have approximately seven different pasta varieties (e.g. spaghetti, rigatoni, fusilli, etc.), providing anywhere between “thirty to forty different styles,” says John. Bombolini will carry three to four fresh sauces, most likely the staples such as alfredo, meat, and marinara. John will also make homemade vinegars and oil that can be mixed and matched. Bombolini will have an antipasto bar as well as ravioli for sale.

Customers can have fresh pasta cut for them to take home, or they can have pasta cooked on the spot for lunch or an easy carryout dinner. “It’s another option to have something good,” says John. Most meals will be under $10, with some individual meals as low as $6. It’s the owners’ hope that anything taken out of Bombolini will feel “like a special meal, without spending everything on it.”

Although ready to open now, John and Lolita are waiting on city permits and plan to open either this week or next. Sadly, the arrival of the permits means that Mopsis will no longer have the run of the joint–the health department typically frown on dogs walking about a working kitchen. However, the pasta dachshund on Bombolini’s storefront window won’t be leaving anytime soon.