Richmond’s favorite cidery has a cool process and a cool future ahead in their new location in Scott’s Addition. All of that is great news, but go ahead and just gimme the dang cider. Richmonders love their locally crafted beer with so much intensity that sometimes I get worried for them. Do they get enough water? Are their livers crying out for help? And sometimes…are their tastebuds damaged in some way?

I mean no offense to the thriving Richmond breweries. I certainly would drink their beer over other beers any day of the week. But what I don’t get is how anyone can taste anything as good as Blue Bee Cider and go back to beer.

Courtney Mailey’s golden brews taste like sunshine mixed with magic (and sometimes a little ginger, hops, or other ingredients). They’re dry like champagne but more interesting on the tongue–showcasing apple flavor without any of the cloying sweetness. And brother, I’d take apple juice over hop juice any day.

Blue Bee–named after the Virginia native blue orchard bee that pollinates apple blossoms every spring–has surged upwards in popularity since it opened in 2013, becoming Virginia’s first urban cidery. And really, the process is more wine than beer. “I knew I wanted to be a winemaker, but I didn’t want to do red or white wine,” says Mailey. “Virginia is a top producing apple state, and that was where I started to put all the pieces together in my mind. Then, the more I learned about orcharding and that kind of farming–it’s so deeply romantic. Who hates an apple? I mean, really!”

Some of my favorite foods are homemade applesauce, apple butter, and apple pie. I do not hate apples. Even being in the cidery, with its delightful scent of fermenting juice, is making me hungry for all of the above. Oh, and also I would love to be able to down a bottle of Charred Ordinary at 10:00 AM in the morning and then go back to the office and respond to some social media comments about Confederate flags. But some things can never be (or, more accurately, should never be).

So instead, I ask for a tour of the facility, which is soon to be an ex-facility. Blue Bee is heading to Scott’s Addition, where they’ve purchased the old city stables property. It’s just over 9,000 square feet, which isn’t that much of a size upgrade, but the layout and the structure are what’s key.

“It’s not about the neighborhood,” says Mailey. “It’s about the site.” I’d asked her semi-seriously if she were really just ditching Manchester for the Addition1, which now houses some go-to hangout spaces (most notably Ardent Craft Ales and Isley Brewing Company). She’s always wanted to be in a historic manufacturing neighborhood, so no changes there. The biggest aspects of the stables that will allow Blue Bee to expand–higher ceilings and wooden floors, which allow for more stacking and more stainless steel tanks. They’ll start with at least one new bright tank and between two and four fermenters. Plus, the courtyard will be a great place for hangs.

If you don’t care about the process, I’ll translate: bigger batches, more supply in your favorite markets (who will now be less likely to go out of stock, thank goodness), and a spot to sit back and revel in all things cider. 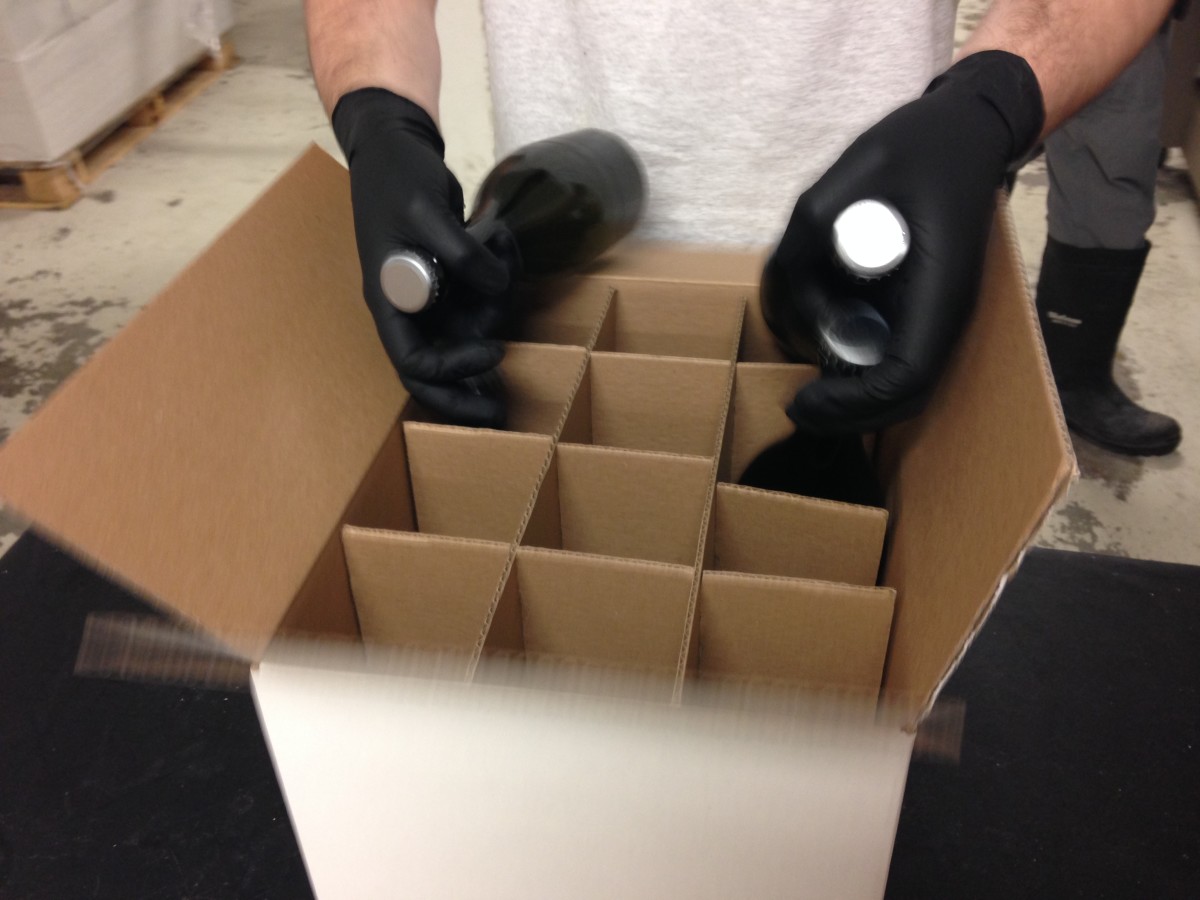 Manuel Garcia boxing up bottles that, sadly, I did not take home.

Right now, the site within the Corrugated Box Building in Manchester consists of only a couple of rooms–in one, apple flesh makes its tearful departure from stems and cores and such before being pressed via a balloon technique that I could only describe via primitive diagram. From there, the process mirrors wine. Juice goes into giant plastic bags within giant cardboard boxes in a very chilly room, where it all ferments. It’s bottled in the same room.

“The thing about apples is that they evoke wholesomeness and happiness, and you just don’t get that from any other agricultural product that ultimately becomes alcohol.”

There’s more to making cider than I’ve just primitively laid out, but at this point, I’m too figuratively intoxicated with the sights and smells of so much cider that I can’t be bothered with the details.

What I’m most interested in is apples, orchards, and why Mailey has chosen to stick it out with the quintessential Virginian fruit. “The thing about apples is that they evoke wholesomeness and happiness, and you just don’t get that from any other agricultural product that ultimately becomes alcohol,” she intones, wisely.

“Plus, they all have such adorable names: Northern Spy, Pumpkin Pound Sweet, Winesap…”

When Prohibition hit, the apple industry had a big PR problem, so they began marketing their unfiltered juice as cider. What a hugely successful brand image shift–nowhere else in the world could the word “cider” be confused with a non-alcoholic juice, but here in America, cider can be sold hot, cold, mulled whatever, but that doesn’t mean it’s the fermented, fizzy beverage that is just now making a comeback.

A PR problem that birthed another PR problem? Maybe!

Americans are quick to think of those big-batch commercial brands like Woodchuck, which taste like alcoholic, bubbly apple juice–only not even as delicious as that sounds. Maybe like alcoholic apple soda. “For me, apple to bottle, the fastest I can go is three months,” Mailey explains. “For a mass-produced cider, they want to get it to 17 days or less. It’s sort of the difference between wine cooler and wine.”

“Spain, England, France–those are really the old world cidermaking countries,” she goes on. Blue Bee does their thing in the English style, but she gives me a pro tip that Charred Ordinary (one of their most popular ciders) is really reflective of what a Spanish cider tastes like.

More locally, Virginia’s apple varieties have seen big changes, with Prohibition again making some huge, permanent changes. Certain traditional varieties simply stopped being cultivated as orchards and farms moved on to apples that were better for eating, and some are now extinct. Mailey pulls out a big book and rattles off some (adorable) names.

“Royal Pearmain–that was included in William Cox’s treatise on apples from 1870,” she finds on a page in the book. “So that’s an example of a good cider apple grown in the vicinity of Richmond. But we haven’t seen it on record since 1905.

“Hops and barley and grain, people didn’t stop producing that stuff. Even when it was illegal to make beer, people were still using grains for other things, but apples became strictly a fresh or processed consumed product. So that eliminated the need for this entire class of apples.” What was left was largely too sweet to be used for cider. Mailey and her crew are looking for apples that have just the right balance of tannins, sugar, and acid. They’re not trying to bake a pie.

Despite their zeal, Blue Bee doesn’t want to singlehandedly bring apples back, even as they expand into their new digs. Mailey discovered the downside of being too popular too fast–although of course, she’s incredibly grateful for how quickly she was embraced by Richmond drinkers. She’s run out of apples, had too many apples, had whole varieties be affected by weather, had bumper crops that she had to figure out creative uses for. Depending on what Mother Nature feels like year after year, her output will change.

She sees her job as making connections with farmers, which has been one of the most challenging but rewarding parts of her journey. Now, she and multiple family farms are working together, and she’s had several come to her and ask her advice in dedicating a portion of their land to apple orcharding.

With the advent of homebrewing, more folks are interested in learning how to make the good stuff themselves. Blue Bee’s workshops, which will began again in the fall, provide the know-how as well as a batch to take home. In an effort to help out, I will provide enthusiastic opinions on your results. Just leave it on my front porch and I’ll get back to you.

Once Blue Bee’s firmly established in their new digs, we’ll likely see them branch out a little bit. Mailey credits her “cider evangelist” Brian Ahnmark for taking them to the next level, distribution-wise, but now is surely the time for encouraging the sapling to grow into a not-too-big, not-too-small tree. It won’t be long now until the cidery is attracting even more people to its tasting room with more varieties, more innovations, and just a whole lot more of this superior beverage.