Richmond-based Work Labs recently popped up in my Twitter feed as some of RVA’s ad & design types rallied to defend the local design firm over some beer-related intellectual property shenanigans.

Richmond-based Work Labs recently popped up in my Twitter feed as some of RVA’s advertising & design types rallied to defend the firm over some beer-related intellectual property shenanigans.

Back to present day, Colorado-based brewery New Belgium released a new beer named Shift (which is delicious) on April 2nd. Along with the brew came lots and lots of marketing materials. Thing is, a lot of New Belgium’s new Shift branding looks similar to Work Labs’s old WORK branding. Particularly damning, in my mind, is this flowchart-like poster. 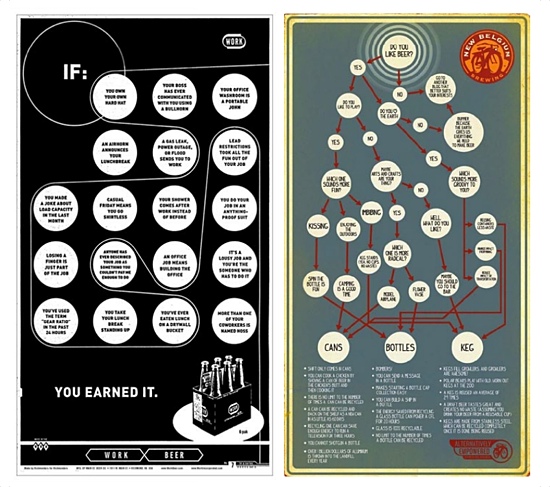 Also interesting is this bit on the WORK beer website:

Since showing its campaign in 2005 to a brewery in Colorado, Work Labs has maintained a strong relationship with this brewery. Said brewery also uses the same ad agency as New Belgium Brewery. That other Colorado brewery loved the campaign but was not yet ready to launch a new beer.

Work Labs is, smartly, using this flash of public interest to push both the return of WORK beer and to catch a bit of national publicity. I haven’t seen New Belgium comment publicly, but it’ll be interesting to see how things turn out.