For most of his life, Cy Bearer couldn’t have cared less about bees, but now he makes honey with the help of tens of millions of his closest friends. “Yellow jackets are just assholes.” If anyone can attest to that point, it’s Cy Bearer. Owner and founder of Bearer Farms, Bearer is in the business of bees. “Bees are peaceful foragers,” he said on a 100-degree day on his Louisa County farm. “They rarely attack when they’re away from the hive.” Yellow jackets and other wasps (which are not bees despite visible similarities) give bees a bad rap. Cy Bearer is working to change that.

Bearer, 30, owns approximately 250 hives scattered across Richmond, Goochland, Lousia, and Mannequin. Each hive can hold upwards of 150,000 bees. “I’ve got billions of bees,” joked Bearer. While that number may be an exaggeration, it’s not by much.

Bearer bought his Louisa property1 to sustain his landscaping company. “I started this farm as an ornamental tree farm” specializing in Japanese Maples. After taking a year to bulldoze the property’s overgrowth, Bearer permitted his uncle Alfredo to install two hives. Instruction in beekeeping soon followed. “I was taken away by it,” said Bearer. He became nearly “obsessed” with the tiny creatures. “They’re so interesting.”

In about a year, Bearer met a beekeeper in North Carolina who was looking to sell. “He wanted out. I wanted in.” Bearer bought roughly 150 hives and relocated them to the Richmond Region. 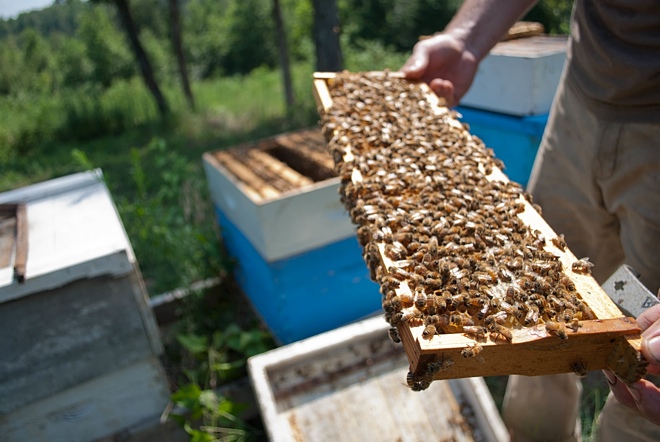 It took Bearer about a year before he became comfortable keeping bees without wearing a mask. He will sometimes wear one during overcast days (when bees are typically more agitated) or while harvesting honey.

Bees typically do not sting while away from the hive. The random bee you encounter is likely attracted to water, sweat, and sweets, and isn’t looking to sting you.

However, Bearer has sustained upwards of 100 stings in a single occurrence.

One day while riding a tractor on his property, Bearer inadvertently crushed a wasp nest. He was repeatedly bitten so badly that he leapt from his tractor and ran to submerge himself in the nearby river. His tractor kept on going and collided with a nearby tree.

He began harvesting honey and packaging it for sales at local farmers markets. He also gave honey to local restaurants like Kuba Kuba and Garnett’s, which began incorporating the locally-sourced honey into their dishes. In time, Ellwood Thompson’s, and even Whole Foods in Short Pump, would carry Bearer Farms Honey. “It’s really exploded for me,” said Bearer about the sudden and growing popularity of the honey. “For as much as I can produce, people are calling me for business.”

He estimates that his bees produce between 5,000 – 7,000 lbs. of honey each year. He calls the process of harvesting honey rudimentary and the “same way they’ve been doing it for hundreds of years.”

Over a period of three weeks, Bearer and assistants will smoke bees and their hives with a mint-smelling concoction that compels bees to the lower levels of the hives. Bearer loads what amounts to a desk drawer–absent a bottom–upright onto a truck bed. The remaining bees are blown away while the hive is covered in a plastic bag. The honey then goes through several filters before being packaged and shipped for sale. “This season has been wild. “I’ve seen so much growth.” A growth in demand and production will lead to more diverse honey-related products.

Most immediate is for Bearer to make 4-6 oz. jars of honey, which have been used as favors in several weddings. He also hopes to make facial scrubs, lip balm, and foot creams. In addition, he wants to use a honey byproduct called propolis, which can be used to seal cement cracks, but has become a popular supplement to boost the immune system. “People pay a pretty penny for it.”

If these byproducts of honey seem similar to another company specializing in honey byproducts, Burt’s Bees, it’s not a coincidence. “I look at them as a great model and success story,” said Bearer. While the products of Burt’s Bees can be found nationwide, Bearer wants to expand his operations while still remaining local. “There’s quite a strong market here in Virginia that’s untapped,” he said. “Right now I’d like to keep it local.”

Aside from growing his business, Bearer also wants to educate the public about the importance bees play in nature. “They are responsible for pollinating 60-70% of food” across the world, he said. To raise awareness, Bearer has installed about 20 rooftop hives in Richmond and Henrico, including one on top of Kuba Kuba. “The response has been really positive,” he said. “A lot of people want to have a hive on their property.” He said that the survival of bees depends on hobbyists, those who learned–just like he did–to appreciate the little creatures and look beyond their mischaracterized reputation. “Luckily, it’s becoming hip to keep bees.” 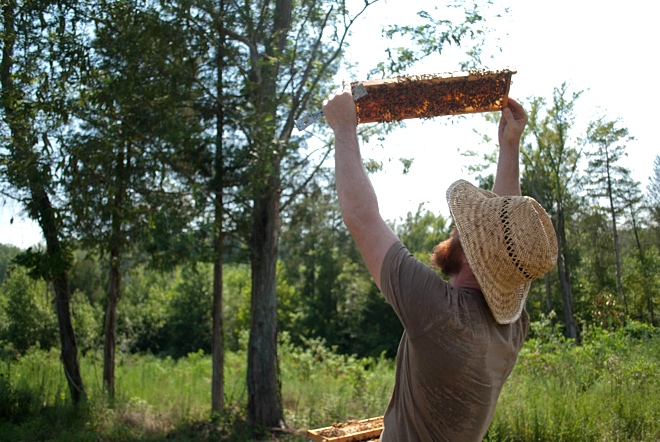