The Battle of Bull Run

It is July 1861. Northerners cajole President Abraham Lincoln’s recently selected commander of the northeastern Virginia army, Irvin McDowell, to embark upon a fatal and ballastic blow to the Confederates to finally end the Civil War. McDowell acquiesced, but encountered a resourceful Confederate Army, and a bullwark of a man: “Stonewall” Jackson.

In May, President Lincoln handed McDowell command of the Army of Northeastern Virginia, despite never having commanded troops in battle before. He was tasked with preparing the newly-formed and inexperienced volunteer army for battle, all the while facing immense political pressure to put his new army into use. The common perception for both North and South was that one decisive victory was needed to end the war, and then the whole affair would be over. Based in Washington D.C., McDowell found himself harassed by both politicians and citizens alike, demanding that he take his army south to accomplish this task. Even Lincoln encouraged him, dismissing his army’s inexperience by saying “You are green, it is true, but they are green also; you are all green alike.”

Giving in to the political pressure, McDowell left Washington with his army of approximately 35,000 men on July 16th, the largest field army yet assembled in North America at that time. They were heading southwest to Manassas to meet the awaiting Confederate Army of the Potomac, commanded by General P.T. Beauregard.

Beauregard’s army waited across a creek named Bull Run near Manassas Junction, a key railroad connecting Richmond to points west. Beauregard’s army was definitely smaller, with only 20,000 troops, arguably as inexperienced as McDowell’s troops. Once McDowell’s arrival had been confirmed, Beauregard called for assistance from Richmond. The Confederate government in Richmond ordered Gen. Joseph E. Johnston, stationed nearby in the Shenandoah Valley, to assist if possible. Johnston set out at once with his 10,000 troops, traveling east aboard the Manassas Gap Railroad. While McDowell’s troops rested from the march and scouted the Confederate positions, the opposing army gained valuable time to allow Johnston’s forces to make their way to Manassas.

McDowell’s assault began in earnest early on the morning of July 21st. At 2:30am, he marched attack columns north to surprise and outflank the Confederate left. Upon their arrival, he would launch a smaller diversionary attack at a place called Stone Bridge. As the morning drew on, it was clear that McDowell’s strategy was too complicated for his untested troops. The 12,000 troops marching to outflank the Confederates had trouble navigating the narrow paths through the woods and didn’t arrive at their destination until close to 9:00am, about three hours late, long after the diversionary attack had started at Stone Bridge. The outflanking maneuver was quickly discovered and Confederate Gen. Barnard Bee and Col. Francis Bartow quickly brought in their troops to reinforce the left flank.

The Union force attacking that left flank was still much stronger than the Confederate forces gathered there. Outnumbered, the Confederates started to fall back to a nearby hill. Around noon, some of Gen. Johnston’s reinforcements came to the aid of the left flank. Col. Thomas J. Jackson, a relatively unknown officer at the time, brought up five regiments and artillery to help push back the advancing Union troops. As the disorganized troops of Col. Bee were falling back in confusion, Jackson’s stood fast, and Bee shouted to his men, “There is Jackson standing like a stone wall! Rally behind the Virginians!” Hence, the famous nickname “Stonewall” Jackson.

As part of the Union force advancing on the left flank, the 2nd Rhode Island regiment was engaged in a heavy firefight. After losing its commanding officer, the remaining officers struggled to gain control of the situation. Maj. Sullivan Ballou (who we featured earlier this month) was one of them. According to America’s Civil War magazine:

In order to better direct his men, Ballou rode his horse ‘Jennie’ in front of his regiment and turned his back to the Confederates. At that point, a 6-pounder solid shot, probably fired by a gun of the Lynchburg Artillery, tore off his right leg, killing his horse. The stricken major was then also carried to Sudley Church.

Ballou died from his wounds one week later.

As fighting raged on into the afternoon, the Confederates successfully captured several Union artillery guns and helped to turn the tide of the battle. Finally, around 4:00pm, two fresh Confederate brigades that had just arrived at the battlefield helped to push the Union back until they crumbled and retreated. 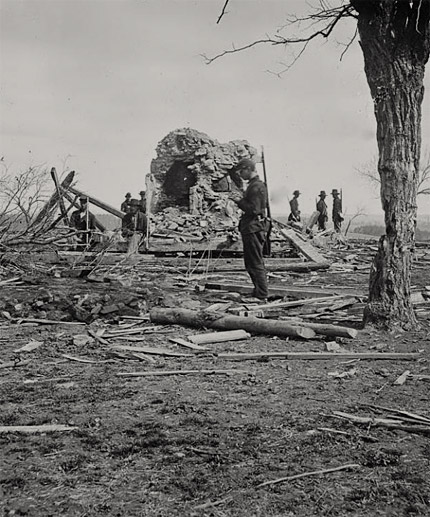 In one final blow to McDowell, many of the same politicians and citizens of Washington D.C. who demanded his attack on the Confederate army would also help to bring about his downfall on the battlefield. That morning, many D.C. residents rode out in carriages to see the battle for themselves. The Civil War Times described the scene on the morning of the battle:

Washington rumbled with an excitement rarely matched in the capital’s history. For months, the 19th-century equivalent of CNN had churned out news and speculation at a feverish pitch. Now, the day of the big battle had finally arrived. It was Sunday-the week’s only leisure day-and throughout the city, newspapermen, politicians, and common folk hunted up carriages for a trip to the front. Talk of the battle was everywhere, and many of the curious meant to see of it what they could. The sun rose over clots of civilian wagons heading westward out of the city, taking their passengers to witness what would surely be an unsparing, unequivocal Union victory.

Now that it was clear that the “unequivocal Union victory” wouldn’t materialize, it was the same spectators that caused massive confusion as troops tried to retreat back to Centreville. The roads were already clogged with carriages of panicking civilians and congressman trying to leave the scene, and quickly became a complete mess. Panic seized the Union soldiers as they fell back, and the orderly retreat turned to chaos. Hundreds of Union soldiers were taken prisoner in the confusion.

The Confederate victory was a wake-up call to the North. The Civil War would not be over in one decisive battle. It would not be over that summer. For the first time, they realized they were in for a long war. The next day, President Lincoln requested the enlistment of 500,000 men for up to three years of service.

The Confederates in Richmond were bolstered by their victory, but also sobered by the reality of the battles that lay ahead. They also mourned the loss of Confederate commanding officers Gen. Bee and Col. Bartow.

In the end, Gen. Irvin McDowell received much of the blame for the Union loss. He was soon replaced by up-and-comer, Maj. Gen. George B. McClellan, who we’ll learn more about soon as the summer of 1861 continues to unfold.