cookies of candy cane goodness. Day 2 brought chocolate-covered matzoh. Now Day 3 brings you something that could actually be considered, in a way, somewhat good for you (courtesy of our own Susan Howson).">

Day 1 brought cookies of candy cane goodness. Day 2 brought chocolate-covered matzoh. Now Day 3 brings you something that could actually be considered, in a way, somewhat good for you (courtesy of our own Susan Howson).

Day 1 brought cookies of candy cane goodness. Day 2 brought chocolate-covered matzoh. Now Day 3 brings you something that could actually be considered, in a way, somewhat good for you (courtesy of our own Susan Howson).

For those of you who don’t know The Suze (as we call her in these parts), she’s our resident movie/theater/performance reviewer. In addition to the gobs and gobs of work she does for us, she writes about movies (yes! even more!) over at Susan Year Itch, hilariously bakes with her sister over at Marthable, and will write about whatever you want when on the clock at 11th Hour Creative.

Here she offers up a festive treat that won’t ruin your diet OR your holiday spirit. She’s talented, that one. 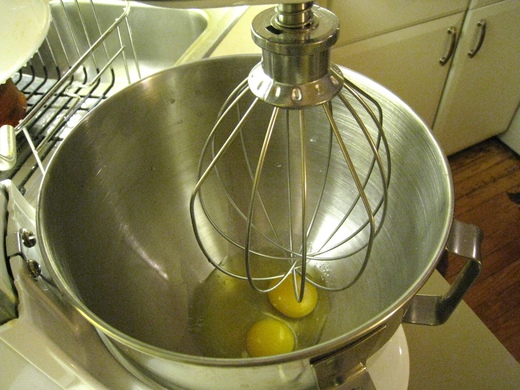 For someone who has two stand mixers (oh, it’s for no real reason, just because I had a dumb vision once of being able to do two things at once), I don’t really like sweets that much. Or maybe it’s because I’ve reached my lifetime quota. Either way, my tastes have changed over the years to favor less sugar in my baked goods and more sugar in my friends. I first made this Olive Oil-Anise Cake because Martha Stewart told me to, and I needed something to post on the blog I co-author about her terrifying ways. I’d made olive oil bread before, but never used olive oil in cake. Now I’m hooked. With a couple of variations, it’s become a less sweet, healthier favorite in these parts. And of course the part I’m referring to is my stomach.

Whisk flour, salt, and baking powder in a small bowl.

Fold* into egg mixture in 3 additions.

Divide batter evenly among pan(s), and bake until top of cake is light gold, begins to come away from the sides of the pan, and testers inserted into centers come out clean, about 20 minutes (or 25-30 if you’re just making one cake. Keep an eye on it, visual cues are always more important than timers, but don’t quote me on that if your house burns down. Be smart, everyone.)

Let cool in pans for 10 minutes. Invert cakes onto wire racks, and dust with confectioners’ sugar (got a mesh strainer? Hold it over the cake, dump some powdered sugar in it, and then shake it a little or tap it on the side with a fork.).

*”Folding” can seem intimidating to the infrequent baker, but it’s so, so easy. The point is to incorporate one thing into another, keeping an airy substance like meringue from flattening out or a fragile substance like raspberries from smooshing all over everything. Just dump some of one thing into another, dive your rubber spatula down to the bottom of the bowl, then run along the bottom and up the sides, scooping the stuff you drag over the top. If you can’t master it, just “stir gently.” It’s basically the same thing.

Tomorrow we’ll hear from our fourth and final competitor, a man who (when not baking) helps make Secco the Richmond hot spot that it is. Don’t forget: Baker Bash!!! voting happens on Friday!