The third annual RVAJazzfest will take place on Saturday, April 9, 2011, and will feature Harris Eisenstadt and Canada Day, the Brooklyn-based drummer-led quintet whose music and members have been called phenomenal, unapologetic, and exploratory. Following their self-titled debut album on Clean Feed Records in 2009 and Eisenstadt’s lauded solo album Woodblock Prints last year, the band is touring in celebration of their new album on the Songlines label.

RVAJazzfest will be held at The Camel at 1621 W. Broad Street in Richmond, VA. Music will start promptly at 9pm. Attendees are encouraged to arrive early. Tickets will be $15 in advance and $20 at the door, $12 for students at the door. More information on purchasing tickets in advance will be available here soon. 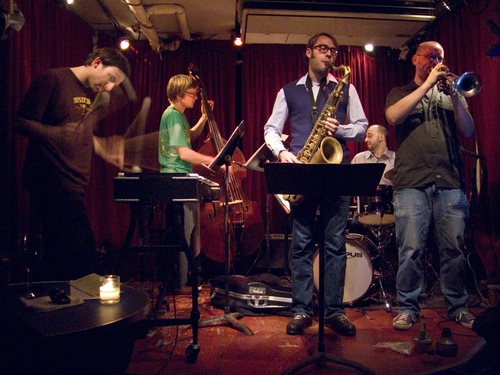 About HARRIS EISENSTADT AND CANADA DAY

“Harris Eisenstadt, a drummer and composer originally from Toronto, takes a fixer’s approach to music making, looking for ways to fit the pieces together. He works along jazz’s progressive fringe but doesn’t generally set out to make a ruckus. In his own music especially, he often seems intent on extracting consonance from dissonance or forging ungainliness into grace.” (Nate Chinen, New York Times). Critics have called him “one of the new generation’s leading composers” (Troy Collins, AllAboutJazz.com), “strong proof that jazz is still young and growing,” (Greg Burk, L.A. Weekly), “vital and increasingly influential” (Glenn Astarita, jazzreview.com) and “one of the most creative and skilled musician/composers incorporating traditional material to create new and vital improvised music” (Robert Iannapollo, AllAboutJazz-New York). The Village Voice’s Jim Macnie adds, “he’s perpetually building new ensembles to suit the variety of music he hears in his head—that’s what composers do.”

One of only a handful of drummers equally well-known for his work as a composer, Eisenstadt is among the most versatile and prolific musicians of his generation. His eclectic resume includes studies with some of the most respected names in both improvised music and West African drumming, and performances in genres ranging from film and theater to poetry and dance to contemporary classical and opera. Most active in jazz and improvised music, as both an in-demand sideman and a bandleader, he has performed all over the globe, earned commissions from organizations such as Meet The Composer and The American Composers Forum, and appeared on more than 35 recordings over the past decade. His latest recording, Woodblock Prints (No Business, 2010), has received rave reviews, and recent honors include nomination for up-and-coming artist of the year by the Jazz Journalists Association (2009), and rising star in the composer category of the Downbeat International Critics Poll (2009). 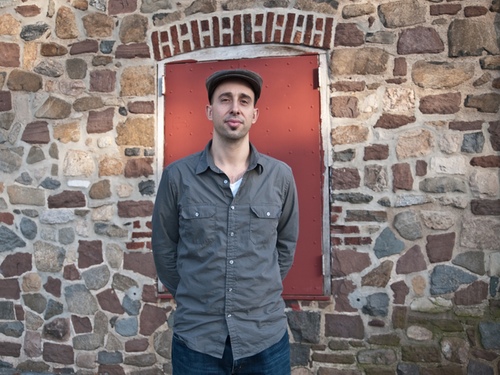 Nate Wooley grew up in a Finnish-American fishing village in Oregon. He has spent the rest of his life trying musically to find a way back to the peace and quiet of that time by whole-heartedly embracing the space between complete absorption in sound and relative absence of the same. He began playing trumpet professionally at age 13 with his father, and after studying he moved to Colorado where he studied more with Ron Miles, Art Lande, Fred Hess, and improvisation master Jack Wright. His tenure with Jack began to break Nate out of self-imposed molds and into the sound world that he has embraced as his own. Nate currently resides in Jersey City, NJ and performs solo trumpet improvisations as well as collaborating with such diverse artists as Anthony Braxton, Paul Lytton, John Zorn, Fred Frith, Marilyn Crispell, Joe Morris, Steve Beresford, Wolf Eyes, Akron/Family, David Grubbs, C. Spencer Yeh, Daniel Levin, Stephen Gauci, Harris Eisenstadt, Taylor Ho Bynum and Peter Evans. “Nate Wooley is one of those rare players who seemingly pop up from nowhere, fully formed and confidently indicating the future of his instrument in contemporary music.” – Bill Shoemaker, Moment’s Notice, “Nate is, without hyperbole, one of the most individual and interesting trumpet players out there today.” – Dave Douglas

Hailed by the New York Times as a “dazzling” soloist and composer with a “fondness for airtight logic and burnished lyricism,” Chris Dingman is one of the most sought-after vibraphonists of his generation. Schooled in the jazz tradition, yet influenced by a wide range of music and experience, Dingman draws inspiration and meaning from a diverse set of musical sources, uniting them in a progressive approach that has earned him praise for his “poignant work” (David Sprague, Variety), his “adaptive humility” (Nate Chinen, NY Times), and as “downright hypnotic” (John Barron, All About Jazz). He has performed and studied with many of the world’s greatest jazz musicians, including Herbie Hancock, Wayne Shorter, Benny Golson, Jimmy Heath, and many others. Now based in Brooklyn, NY, he is currently working with many of the leading lights on the jazz and creative music scene, both as a sideman and as a leader with his project Waking Dreams.

Garth Stevenson was born and raised in the breathtaking Canadian Rockies where nature became the common thread through his life and music. He regularly carries his 150-year-old bass to the woods, the beach, the desert, and most recently to the penguins in search of new music, sounds, and inspiration. His solo bass music uses looping and reverb pedals to create rich layers of sound and melody. In 2007 he released Alpine, his first solo album which received praise in many magazines including Double Bassist Magazine and Yoga Journal. In 2008 his solo composition “Grandfather” won the International Society of Double Bassists Composition Competition. Stevenson spent February in Antarctica performing and acting in a new film by director Scott Cohen with actors Vincent Kartheiser, Olivia Thirlby and William Campbell. He had the opportunity to play with thousands of penguins, seals, icebergs, and called twelve whales to the boat by imitating whale calls on his bass. His collaboration with Cohen continues as he composes music for the film score. Garth introduced his solo music to the yoga community last year at Wanderlust, a festival of music and yoga at Lake Tahoe, California. Stevenson graduated from the Berklee College of Music on a full scholarship with a degree composition and performance in 2004. While in Boston he played with jazz legends George Garzone, Joe Lovano, John Lockwood, and founded TAQ, a trio with Polish pianist Marcin Masecki and Israeli drummer Ziv Ravitz. In 2005 he moved to New York and joined bands with Sonya Kitchell, John Shannon, Mat Maneri, Petr Cancura and worked as a freelance bassist appearing on over 50 recordings. He has performed on David Letterman, Craig Fergusson, hundreds of radio stations, at Bonnaroo, and at music festivals in Europe, Japan, Canada, and South America.

“This superb quintet…are unapologetic vanguardists who just happen to have a strong grasp of post-bop fundamentals.” Downbeat

“A composer of great depth and diversity, Eisenstadt proves a fine trap drummer…and a formidable bandleader who deserves more recognition in both areas.” – All Music

“…[One] of the city’s finest cutting-edge improvisers. ” – TimeOut New York

“[Eisenstadt’s] phenomenal control of the full dynamic range of his kit, from ultra-quiet hiss to full-out cracks is impressive.” – Signal To Noise

Initially inspired in part by Ornette Coleman’s classic quartet with Don Cherry, Charlie Haden and Ed Blackwell, The Scott Clark 4-tet — led by drummer and composer Scott Clark — has quickly found its own way of working with time, space, and sound. Featuring Fight the Big Bull members trumpeter Bob Miller, saxophonist Jason Scott, and bassist Cameron Ralston (with whom Clark also plays in Glows in the Dark and ILAD), the Richmond, Virginia-based quartet was formed in late 2010, drawing in listeners with its musicians’ individual reputations and keeping them there with its nuclear bomb-like span of the post-bop/free-bop style.

If you’re a business or individual interested in sponsorship opportunities for RVAJazzfest 2011, please contact Lauren Eubank at lauren AT rvanews DOT com.