AMP! up RVA’s future by mentoring an RPS student

It’s called AMP! and it brings together adults and kids of all stripes. We learned last week that nearly every school in the Richmond Public Schools system saw a decline in their SOL pass rates during the 2012-2013 year. Last month, police seized a marijuana plant from the home of School Board member Shonda Harris-Muhammed. And back in June, two school board representatives had to be physicially separated by security after a meeting. Yeah, you could say it’s been rough for Richmond Public Schools lately.

But it’s not all bad. One bright spot is AMP! Metro Richmond, a mentoring program where adults and students meet weekly to discuss life and develop a bond that helps kids both in and out of the classroom.

“AMP! Metro Richmond was formed in 2006 and was developed from a Leadership Metro Richmond team project,” said the chair of the AMP! board, Kelly Groh. “[It’s] a vibrant mentoring program in the Richmond Region where adults and youth meet weekly to share interests, learn from each other, and ‘amplify’ their perspectives on what can be as they develop their friendship.” Currently, all students in the program attend Henderson Middle School in the city’s north side.

AMP! recruits, trains, and offers ongoing support for mentors, who in turn meet with Henderson students for one hour during Friday lunch throughout the spring and fall semesters. One of the mentors is Emily Griffey, whose been with the program since 2008.

“For me it’s just a connection to somebody that I wouldn’t normally connect with,” said Griffey, who works as a senior policy analyst for Voices for Virginia’s Children.

As an AMP! mentor, Griffey attended a half-day orientation and had a background check performed before the first of several lunchtime chats. “It helps to break the ice to have that sort of meal-time perspective,” she said. That initial ice-breaking eventually led to a strong kinship.

Griffey said that topics of conversation vary from boys to tests, sports, popular culture, and more. “It’s anything that’s happening in day-to-day life,” she said. “Sharing the highs and lows with each other.”

AMP! board chair Kelly Groh said that it’s the students who initiate their involvement in the program. “Students prepare an application that is screened by either the school guidance counselor or a Community in Schools representative,” Groh said. “The application states why they want a mentor, their current interests, and what they hope to achieve from the program.” Students must also get the approval of a parent or guardian.

Not only did Griffey’s AMP! mentorship apparently benefit her first mentoree (the two still remain in contact outside of the program), but it benefited Griffey too. “It was really great to be able to connect with another about all of our personal goals,” Griffey said. “It became more about being each other’s cheerleaders.” She now mentors a girl named Tekuilla.

AMP! is currently recruiting members for the fall semester. To those who may think mentoring is too time-consuming, Griffey says, “If you’re spending the same hour having lunch with your co-worker” you can pop over to Henderson and talk with a student over lunch. In addition to creating a unique relationship, you’ll also get a glimpse of what’s to come.

“You get a deeper understanding of what Richmond’s future could look like,” Griffey said. “And have the opportunity to help see you’re going to be part of that future.” 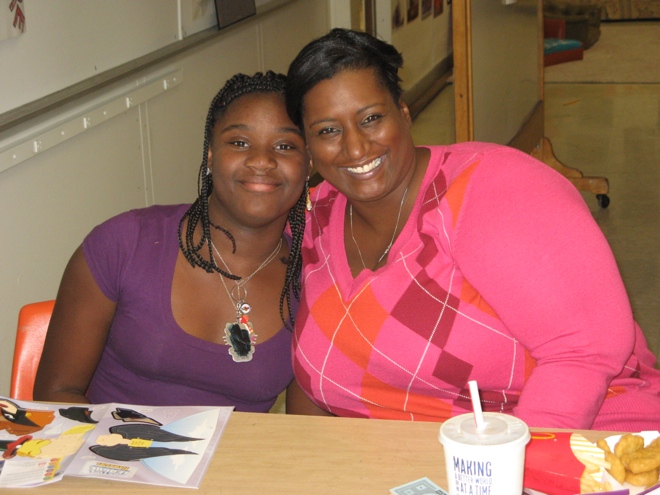