After 125 years, C.F. Sauer has a spicier future planned

Below the illuminated chef on W. Broad Street is a business that’s been around since 1877. Celebrating its 125th birthday, the company hopes to last for 125 more. The C.F. Sauer company entices multiple senses. Founded in 1887, the Richmond-based company titillates tastebuds and noses with its many seasonings and spices. That’s obvious. But at night, the eyes see a 20-foot high, 60-foot wide incandescent sign of a supple, Van Dyke’d chef and the words “Sauer’s Vanilla” brightening W. Broad with 1200 glowing light bulbs (550 for the shapely chef alone).

In 1978, a helicopter carried that sign a mere block from an old building just east of its current location. The reason for the move? It allowed the city to raze a building that would clear the way to construct Hermitage Road.

Now at 2018 W. Broad Street, the illuminated sign is not only the most visible representation of the C.F. Sauer company, but a Richmond landmark in its own right. Last month, the C.F. Sauer company celebrated its 125th anniversary. At a time of reflection and reminiscing, the local company instead has its eyes on the future, with growth planned well into the next century.

The Spice of Life

In 1884, Conrad Frederick Sauer began working as a clerk at a Richmond drugstore at age 17. Before long, the young Sauer realized that flavoring extracts were a popular product among buyers who valued purity. Sauer had an epiphany: selling prepackaged extracts and spices in grocery stores would be both convenient for customers and lucrative for him.

So, on October 13th, 1887, the day Sauer turned 21, he opened the C.F. Sauer Company, the first of its kind in the nation that provided pure flavoring extracts. They were sold in five and ten-gram bottles, for a respective $0.15 and $0.25.

The company was the first to make and sell vanilla extract, and even won a first-prize medal at the famed 1893 Chicago World’s Fair 1 for the product’s purity. 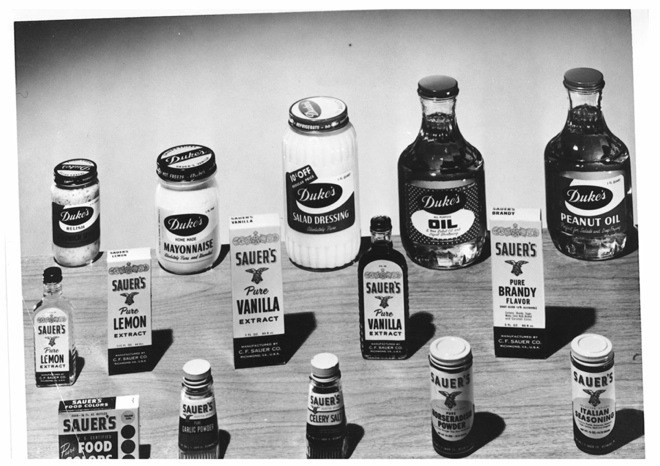 As the business grew, so did its need for space. The company had bounced from three different Downtown locations before finally settling at 2000 W. Broad Street in June 1911 where its headquarters have remained since2. With electric elevators, telephones, and reinforced steel, the building “was pretty cutting edge,” said Erin Hatcher, current retail brand manager at the company. She said that roughly 750 people are currently employed by C.F. Sauer in Richmond.

Founded as a spices and extract seller, the company has also made headway with other products, notably Duke’s Mayonnaise. Purchased in 1929, Duke’s was a predominantly female-run company and one still based in Greenville, SC. 3

In addition, C.F. Sauer purchased margarin maker Dean Foods in 1964. The company also bought Metrolina Plastics in 1976, relocating the Shelby, NC company to Richmond to make the company’s plastic containers for its products. In the 1990s, C.F. Sauer bought fellow spice manufacture, The Spice Hunter, as well as a pair of mayonnaise producers: Mrs. Filber’s and Bama.4

This history, rich as the spices it produces, is impressive enough. But C.F. Sauer’s future may prove the most stunning.

Despite this long history in Virginia’s capital, C.F. Sauer has not cornered the Commonwealth’s spices market.

“We’re up against McCormick,” said Hatcher, a five-year employee who once worked at Kraft Foods. Started by Willoguhby McCormick in Baltimore, MD in 1889, McCormick dominates the spices and seasonings market. “They’re the number one [spices] company in the US,” said Hatcher of the rival. “They’re big.” The company even dwarfs C.F. Sauer on its home turf.

While common in Martin’s stores, Hatcher said the company is not in Kroger and has “limited distribution” in stores like Wal-Mart. “We’d like to own Virginia first,” she said about eventual nationwide expansion. Such expansion will require a surge in production to keep up with demand. C.F. Sauer’s Richmond facility certainly has the means to reach those needs. 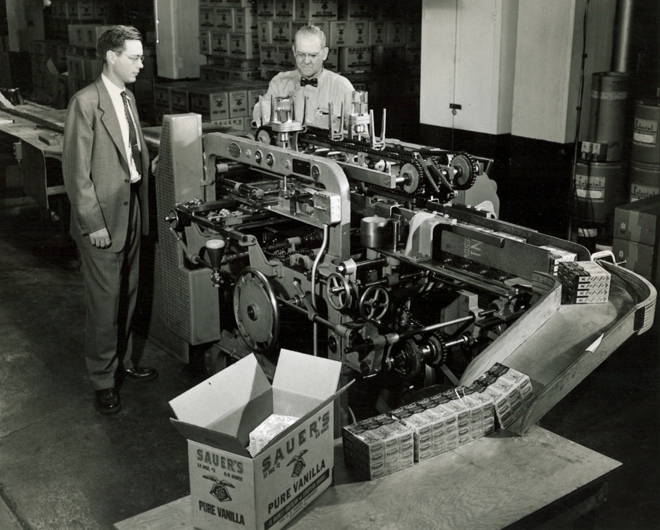 The Richmond plant can produce the following in 60 seconds: 90 baking bag mixes, 150 extract bottles, and 250 jars of spices. The facility has 10,000 lbs. of raw vanilla storage, one 1,000 gallon mixing tank, two 800 gallon tanks, among other equipment. Although closed on Fridays and weekends, anyone who walks or drives by C.F. Sauer on any other day of the week can’t avoid the wafting smells stampeding out of the Broad Street plant.

About 100,000 lbs. of spices are on the premises “at any given moment,” said Hatcher. There is no fixed schedule in producing spices. However “they’re always grinding pepper,” she said, the most common spice in the plant, followed by garlic powder and cinnamon. Should C.F. Sauer’s market share grow in the coming years (as they hope it will), Hatcher said the Richmond plant has the space to accommodate that growth. “We’re not at capacity yet.” And after 125 years, it’s doubtful C.F. Sauer would ever leave Richmond.

Many, including Hatcher, have asked why C.F. Sauer has not fled the city for the tax-friendly suburbs. The answer is simple: “This is what they’ve known,” said Hatcher about the family. “It’s really home for them.”

She recalled C.F. “Connie” Sauer III, who died in May 2011. The third generation Sauer to run the company, he had “a tremendous work ethic,” she said. Even after he retired from his role as president in 1993, Connie continued to work through his 80s. A son of his, Mark Sauer, is one of four in the family currently working in the company.

“There’s a lot of integrity in a family-run business,” said Hatcher. “This family believes in producing quality products…period.” The only destinations beyond Richmond that the company has in its purview comes in the hope of expanding its products across the US and overseas.

Bama mayonnaise, which C.F. Sauer acquired in 1996, has proven popular in Africa. “We do tremendous business there,” said Hatcher. At the time of our chat, a company VP was in Costa Rica to discuss product exportation. Another key C.F. Sauer international market is Mexico, in which Duke’s mayonnaise continues to grow its market share. Of all the C.F. Sauer products, Duke’s will likely be the most successful in the shortest amount of time.

“I have no doubt that Duke’s will become a national brand,” said Hatcher. While it may take time to usurp Kraft and Hellmann’s, Hatcher hopes Duke’s growing popularity will expand its presence westward across the country. “It’s a slow build,” she said, but one she thinks C.F. Sauer can facilitate.

And even though it will be difficult to upend McCormick’s market share of spices and seasoning, the company still tries to do so, especially in Virginia, where C.F. Sauer has built a long and impressive history. But even with this history, the company C.F. Sauer founded in 1877 will not rest on its laurels. It believes it has yet to reach its full potential.

It’ll need another 125 years for that.

Correction: an earlier version of this article misstated that C.F. Sauer has been in business for 120 years. It is 125 years that the company has operated.