World Cup: US vs Ghana

“We have won twice. And as we say there is no two without three, so we want to try and beat them for the third time.” – Ghanaian midfileder Andre Ayew. In the past two World Cups Ghana defeated the United States 2-1. Those losses sent the US home from the tournament, and in the press this year, the Ghanian players are promising a third victory with this bizarre quote from Ghanaian midfielder Andre Ayew, who played in the 2010 win over the US: “We have won twice. And as we say there is no two without three, so we want to try and beat them for the third time,” via Sports Illustrated.

The other teams in Group G are Portugal and Germany, both of which will be very hard for the US and Ghana to get points from–so this game falls squarely in the “must win” category for both teams.

The most talked about man in regards to the US team isn’t even in Brazil. Team Manager Jurgen Klinnsman decided that US all-time-leading goal scorer Landon Donvan wasn’t up to snuff and left him in California. Whether or not this is another bit brilliance by a man that has had success as both a player and coach in the World Cup will be seen Monday night.

The US will need big games from remaining veterans Bradley, Dempsey, and Altidore. The biggest weakness of the team is the defense, especially on the wings. To shore up that defense you might see MLS player Kyle Beckerman playing defense in the midfield. What he lacks in speed he makes up for in soccer smarts, natty dreads, and, I suspect, vicious hacky sack skills.

Experience and speed are the Black Stars’ strengths. Seven players from the 2010 World Cup team take the field on Monday, while the US only brings five with World Cup experience. The number one player for fans of the US to fear is the speedy team captain Asamoah Gyan. He’s broken American hearts before: in 2010 it was his goal in stoppage time that gave Ghana the victory and sent the American’s packing. Unfortunately, that’s not their only threat. There are Ghana’s Ayew brothers, Andrew and Jordan. It’s speed and offense threat that they bring to the table, which could be slightly mitigated by the X Factors discussed below.

The rain, field, and fans. This game will be played in the heart of the Amazon. Nearly nine inches of rain fell in Natal from 8:00 AM Saturday to 8:00 AM Sunday alone, according to INMET, Brazil’s governmental meteorological department. But more than 13 inches are said to have fallen since the rain began Friday. No reports as of this morning of what kind of shape the filed is in.

There are no major roads to Natal and the stadium was constructed with materials brought in by boat and plane. Things did not go as planned and the grass has not fared well. The grounds crew has resorted to using green paint to cover up the brown spots. This combined with the previously mentioned rain could cause issues. Which team this favors is up for debate. The US plays on sub par fields in qualifying, and I honestly can’t speak to Ghana’s qualifying conditions. Ghana will want to play a quick counter attacking game, and the US will want to play a more controlled game. Both of those styles could be stymied by the muck and mire. 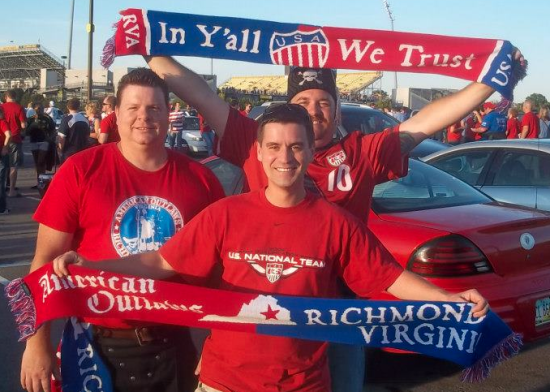 The only country to buy more tickets for the World Cup than the United States was Brazil. The American Outlaws, the US Soccer supporters group, chartered four planes to get fans to Brazil. Expect to see a large contingent of red, white, and blue at all the US games, and that little boost from the stands could be exactly what the players need to get a positive result.