by Dean Christesenphotos by Will Fisher The following Q&A was published in The Commonwealth Times on July 1, 2009, and is reprinted here with permission. While the article’s main purpose was to give advice to young musicians wishing to form bands, the responses from Burton, Pace, and White are valuable and should be of interest […]

by Dean Christesen
photos by Will Fisher

The following Q&A was published in The Commonwealth Times on July 1, 2009, and is reprinted here with permission. While the article’s main purpose was to give advice to young musicians wishing to form bands, the responses from Burton, Pace, and White are valuable and should be of interest to musicians from all experience levels and to fans of their respective bands.

Guitarists Matt White and Scott Burton and trombonist Reggie Pace are very skilled musicians, composers, and improvisers in Richmond’s music scene. While their bands share qualities with jazz–namely the improvisational aspect–each is very different from the next and is influenced by contemporary music. Fight the Big Bull, led by White, is a nine-piece band with Charles Mingus-like moods and dynamic dance beats. Standing still is not an option when Pace’s No BS! Brass plays its New Orleans-styled brass band funk. Burton’s avant-garde approach comes out in his band, Glows in the Dark, which features weaving interplay and free collective improvisation. Their main projects may lean towards the jazz and experimental, but their advice on starting and leading bands transcends genres.

Have you noticed a trend of more bands on the jazz scene being created recently? What do you think the catalyst for this is? 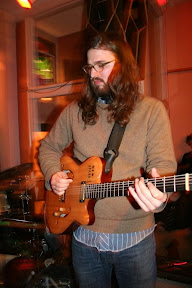 WHITE: Absolutely. There weren’t any bands when I moved here. There was Brian Jones, Devil’s Workshop, and Scott Burton was doing original music but didn’t have a steady group like you see now. I came to VCU and was ecstatic about having so many musicians to play in bands with. That was the most exciting thing to me. There was nothing, though. Me and Scott started Patchwork Collective to facilitate people playing their own music… It helped Fight the Big Bull and Scott’s stuff get started. The collective mindset came to a head, “What is going on? This is a dead end street in the jazz community.” …Things tend to go in waves. In a few years when people get tired of scheduling rehearsals, it’ll go the other way (laughs). A lot of bands started in the same 6-month period in 2006: Glows in the Dark, Fight the Big Bull, Ilad, The Great White Jenkins, and No BS! Brass.

Knowing what you know now, is there anything you would have done differently when starting off with your band or any bands you have been in? Think back to your first bands.

BURTON: I think maybe organizationally more than anything else. I don’t really regret any of the music we were playing. But I do think that knowing what I know now from organizing stuff and talking to people, I definitely could have held things together better and book more shows. There’s a certain way of organizing things that creates its own enthusiasm, and I definitely didn’t know how to do that before. Through Patchwork, I learned what that was all about.

WHITE: There are a lot of subtleties to leadership. When I first came to VCU, I figured that everyone wanted to be in charge, like that was innate in everybody. I knew that I did. Not everyone wants to be in charge, though. People respond well to strong leadership, and that took me a while to realize. Patchwork (although it wasn’t a band, but it was similar) doesn’t exist anymore because I was way too passive and didn’t take charge the way I do in Fight the Big Bull. I learned a lot about leadership from Patchwork.

PACE: I don’t think I would have done anything differently. I had a lot of really bad examples, though. I did the opposite of what I saw some people doing.

Do you view your band as an entity whose members can’t be “subbed” out or replaced for a gig?

BURTON: I’ve had to sub out a gig before. I subbed it out with Bryan Hooten once, with John Lilley before he was in the band, on bass my friend Tom, and Matt Hall played once. In all those instances, we know those people really well. By and large, I don’t like to sub out a gig. Especially now it only happens when we book a gig and everyone says it’s cool and then something comes up. That whole band was started based on the relationships people had outside of the band.

What are the advantages and disadvantages of having one person compose for a band, rather than have the entire process be from collective input?

PACE: [No BS! is] always a collective input even when someone writes a tune. It started off with me writing the tunes and arranging the covers. Lance [Koehler] started writing, Reggie [Chapman] started, and then we wrote collectively. It’s about identity. If you have a band where one person writes the tunes, it gives the band a sound. You do what you want within those boundaries. The downside is, is one person more important than everyone else? On the other side, with collective input, you can get so many cool detailed things that you wouldn’t have thought about. There might be a section that you never would have thought of, but the downside to that is organization: how long it would take to write down. You have to edit your ideas. Everyone doesn’t understand the idea of editing. They might wonder, “Why isn’t my idea good enough?” 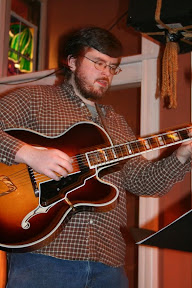 BURTON: For Glows, I leave so much space and a lot is undefined. It takes everyone’s input. Certainly it’s faster, but I really don’t like someone composing and people just playing what they write. You can write great music, but it feels self-serving in a way. The whole point is collective input. For us it works with writing a melody, and weaving is left undefined. I really like ideas from everyone in the band. It’s a lot like being a film director: everyone has ideas and you just have to pick the best ones.

WHITE: It’s practical and more efficient. I would love to put together a group where everyone has equal say, and we sit and come up with shit. But the reality in the jazz community is that people don’t have the same love for rehearsal. Rock bands will get together and jam for 12 hours. I’d love to do that. But you could never ever in a million years get four

jazz dudes in the same room for 12 hours and come up with some sweet shit. I do that with The Great White Jenkins. It’s stressful and takes a ton of time. With Fight the Big Bull from the get go, it was like these guys are all better than I am, all farther along than I am in the jazz scene. It was much easier to have a rehearsal, give them music, play it, and get out of there. Same kind of leadership thing.

But people don’t want to do that [collective input], a lot of people feel awkward doing that. “You called the rehearsal, why don’t you figure out what to do with it?” Everyone has so much creative energy that they’re not trying to waste it on your shit. That’s the vibe I have, too: if someone’s going to call me to a rehearsal, unless they say up front they want my input, I’m going to lay back and do what they tell me. You don’t want to spend all this energy you have on something you’re not sure is going to pay off or be a cool thing. People all have their own stuff that they put their mind into. The timing is easier. I’m already asking guys to do gigs for free, and this keeps rehearsing to a minimum.

On the artistic side, I think you get a singular kind of vision; it’s a specific voice if you only have one other person writing. [Trombonist] Bryan Hooten wrote a chart at the beginning of Fight the Big Bull. I told him, “I would rather you not write. I think it’s better if one person writes, and I’m willing to take on all the writing.” There was a rehearsal where we had a conversation about it… Bob [Miller] was like just because Matt writes the music doesn’t mean we’re less of a band, it just means we have a collective voice.

Being efficient and having an artistic voice are the most valuable things in the world for musicians. Your four favorite musicians sitting in a room does not always equal good collaboration.

How would you suggest a band finds its voice?

BURTON: A compositional voice is something you stumble upon more than anything else. If you’re making it conscious, it’s not going to sound authentic. I’ve heard a lot of musicians try to come up with things… I think the most important thing is writing a lot, noticing stuff in your own writing, and trying to get better at it.

If you had to give one piece of advice to someone starting their first band, what would it be? 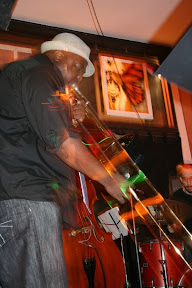 PACE: Play music with your friends. That’s it. Even if you think some dude is a better player than another dude, play with your friends no matter what. It takes hard work to get really good shows. Getting rejected doesn’t mean anything. I’ve emailed places two, three years ago and have just started to get responses back. Make the music the most important thing that happens. Booking shows and playing gigs and making money is not the most important thing. That has to be something that comes with the product.

WHITE: I think your success, assuming you don’t suck, is directly correlated to the hours you spend working on your band. Literally the number of hours…composing or doing business. To the people that have complained to me about things not going well, I ask, “Do you spend three hours everyday at your computer trying to figure out ways to make yourself more famous or get your band out there?” The biggest thing someone can do is be aware that their work ethic directly correlates to their group’s success. Playing, practicing, whatever it is. Different people have different strengths. I don’t mind schmoozing it up on email and the phone; that’s a strength of mine… It’s hard to update my website, I just have a total aversion to doing it [laughs]. But I think people underestimate the hours of hard work that go into success.

BURTON: Definitely rehearse a lot before you play. Try to get something together. Lots of times people will put together a band and play a couple shows of just standards or covers. I think it’s probably better to come out of the gate with something. If it’s not ready for people to see, you don’t have to book shows.

And stay on top of things when booking gigs and venues. Be really cordial to everyone. Follow through. Lots of times, there’s weird musician politics. A lot of it is made up, not even real. People come up with these things that prevent themselves from getting work. Keep contacts organized, stay on top of venues or organizations that you’re interested in, and push forward.