Sights from the 2nd Street Festival

The Jackson Ward community came alive this weekend with the 18th annual 2nd Street Festival. The festival kicked off on Friday night with a dance party featuring Johnny Houston & The Legends, but it wasn’t until Saturday that all four performance stages would show some of Richmond’s best musicians. From 2nd Street Festival I started […]

The Jackson Ward community came alive this weekend with the 18th annual 2nd Street Festival. The festival kicked off on Friday night with a dance party featuring Johnny Houston & The Legends, but it wasn’t until Saturday that all four performance stages would show some of Richmond’s best musicians.

I started off early Saturday afternoon at the Waverly R. Crawley Main Stage to catch a little bit of Saturday’s first performers, the Johnny Peyton Renaissance Big Band. Slightly unimpressed by their first tune, “In A Mellow Tone,” (although an hour later I would hear them from a block away playing “one more time” and “one more once” from Count Basie’s arrangement of “April in Paris,” which heightened my impression of the band) I made my way over to the Joe Kennedy Jr. Jazz Stage. The Jazz Stage tent would become my home base for the festival. 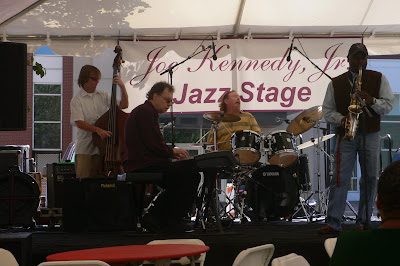 The Kip Williams Quartet (Williams: drums; James “Saxsmo” Gates: saxophone; Steve Kessler: keyboard; Matt Hall: bass) launched things off at the jazz stage. Gates played with impressive tone that would not be out of place on R&B and smooth jazz recordings, but he still managed to sound just as inspired by Maceo Parker as he is by Charlie Parker. 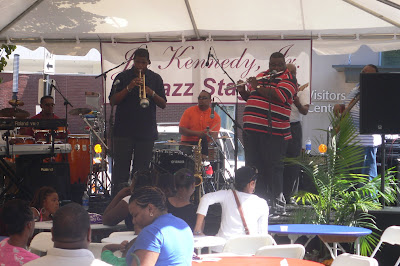 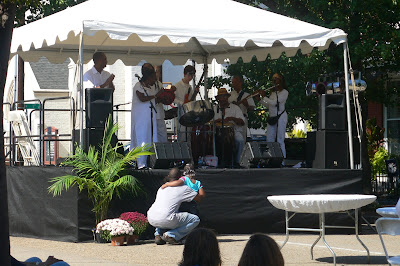 Ban Caribe calls its music “clave soul.” Singer and steelpan drummer Kevin Davis led his band of three vocalists, electric guitar and bass, drums, congas, and flute in music clearly influenced by Afro-Cuban and Caribbean musics. Leading a cute sing-along about a “signifyin’ monkey,” Davis taught the children (and the rest of us) about the music’s underpinning heart of the clave and about the art of storytelling through music. 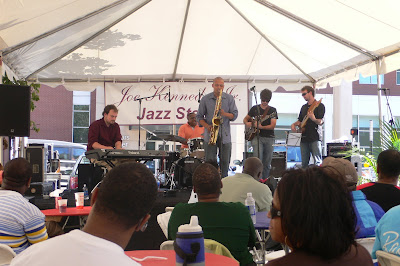 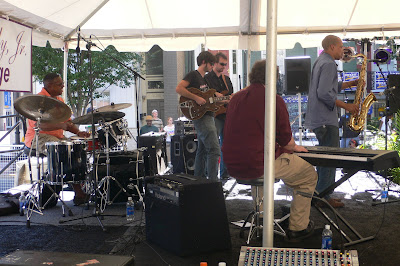 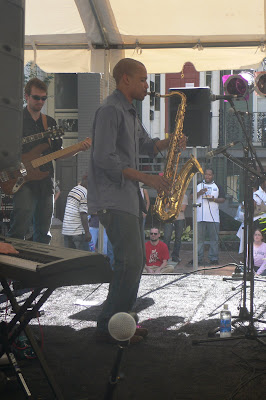 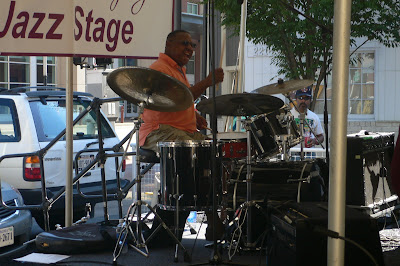 Jason Gay’s SoulArmy (Gay: tenor saxophone; Brian Mahne: keyboards; Alan Parker: guitar; Derrick Englert: bass; Kevin Gaines: drums) was Saturday’s highlight for me. With every solo, Gay got the audience hollering for more, and Parker was equally as electrifying. An original entitled “Barack Obama” got the Obama supporters in the crowd (what seemed like every one of the festival’s attendees) into the music. Covering The Police’s “Walking on the Moon,” Gay began with a solo, using overtones and percussive effects. A light one-drop reggae came into play and the piece eased into an extended jam of great soloing. 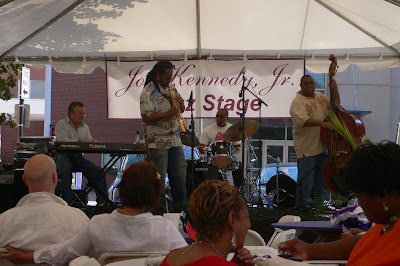 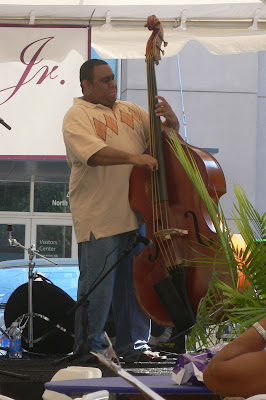 Sunday began in the afternoon with the Jason Jenkins Quartet (Jenkins: bass; Kevin Simpson: tenor saxophone; Anthony Dowd: keyboard; Keith Willingham: drums) on the jazz stage. Remembering the amazing lunch I had eaten the day before from Hidden Treasure restaurant, I came hungry*. I sat down with lunch from Hawk’s BBQ and listened to the quartet go through standards like “Tune Up” and “Softly As In A Morning Sunrise.” Simpson and Dowd both delivered exciting and climactic solos. 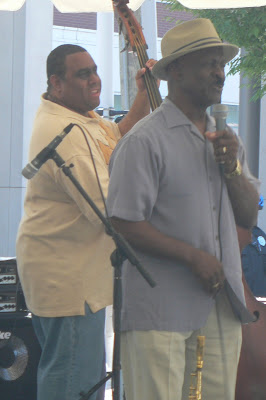 Vocalist Jim Branch sat in on a couple tunes and wooed the crowd. 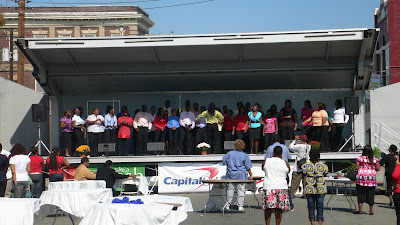 Voices of Virginia, led by Will Griffin, felt like a church service right on 2nd Street. The youth gospel choir, accompanied only by drums and keyboards, sang and rejoiced. A young girl in the front row of the choir sang with enthusiasm and movements that were contagious. I walked away from the Community Stage uplifted. 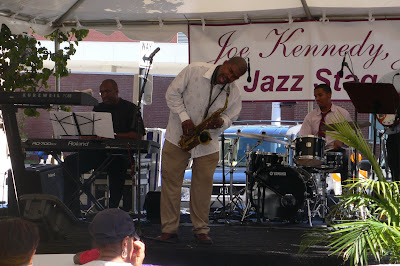 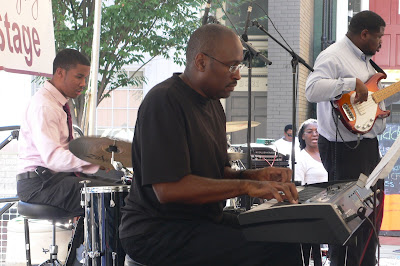 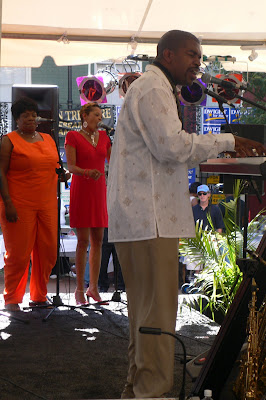 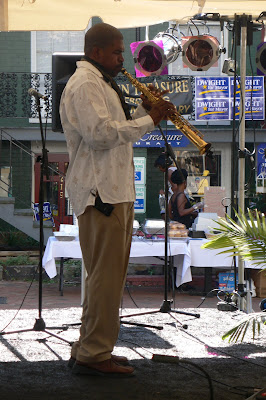 Richard D’Abreu’s “Jazz in the Spirit” (D’Abreu: alto sax, soprano sax, keyboards, vocals; Weldon Hill: keyboards; Mike Hawkins: bass; Billy Williams: drums) continued Sabbath celebrations at the festival back on the Joe Kennedy Jr. Jazz Stage. D’Abreu described his group as a “combination of gospel and jazz,” noting that the two “really spring from the same root.” The very first tune, “By and By,” took the same energy I had just seen from Voices of Virginia and ran with it. Three female singers (Wanda Tiller, Joyce Cook, Parthenia Wallace) joined the group for “Count Your Blessings.” The infectious reggaeton with a sing-along chorus felt just like a seaside party, although at times D’Abreu’s alto saxophone playing sounded right out of Mardi Gras. 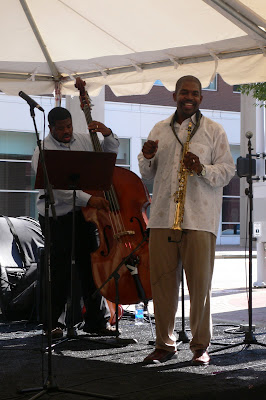 “Jazz in the Spirit is about building community,” D’Abreu emphasized. Whether it was under the jazz stage tent or within Richmond city limits, the 2nd Street Festival ensured that community was inta

*The food was easily my second favorite part of the festival. The amazing sights and smells of foods and drinks were everywhere, and the food that I did have easily stood up to the great music.