RVAjazzfest: Glows in the Dark

Glows in the Dark will perform at RVAjazzfest with Steven Bernstein, Fight the Big Bull, and Boots of Leather on February 21, 2009, 8pm, at The Camel. Tickets are $10, all ages welcome. by Joey Ciucci Given Glows in the Dark’s penchant for cerebral, sometimes disorienting tunes, the title of their first album, Music to […]

Glows in the Dark will perform at RVAjazzfest with Steven Bernstein, Fight the Big Bull, and Boots of Leather on February 21, 2009, 8pm, at The Camel. Tickets are $10, all ages welcome.

Given Glows in the Dark’s penchant for cerebral, sometimes disorienting tunes, the title of their first album, Music to Listen to Glows in the Dark By, is rather analogous to bands’ singular style. Scott Burton may be keeping time on guitar, while drummer Scott Clark absconds with the beat, floating around Cameron Ralston’s driving bass attack, as Reggie Pace forces his trombone to make entirely unnatural noises and John Lilley drops sheets of intermittently atonal and mellow sounds. Change a few things around, and Music to Listen to Glows in the Dark By quickly becomes dark music to listen to on a glowing, Commercial Taphouse Sunday night—a freaky, thematic, free vibe brought to you by some of Richmond’s finest and weirdest musicians. 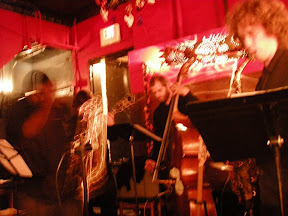 Bandleader, composer, and guitarist Scott Burton, like many Richmond musicians lucky enough to be around during the Devil’s Workshop’s brief gigging career, used the legendary band’s weekly Bogart’s shows not only as inspiration but as a place to meet other players. Burton, who studied with Mike Ess at VCU although he didn’t major in music, started playing standards but eventually changed direction with the Free Breaks Trio. The Free Breaks Trio manipulated break beats by artists including Mad Lib and MF Doom, and played them in relatively uninterrupted sequences. This group also signified Burton’s burgeoning musical relationship with drummer Scott Clark. 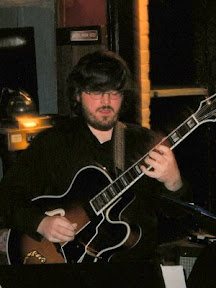 Burton writes GitD’s music in stepwise fashion, first jotting down melodies as text letters, transferring them to notation as ideas flesh out, then devising bridges, setting structure and developing an overall feel for the tune. His scores include cryptic handwritten notes concerning free sections, and Scott Clark uses these, according to Burton, to “always do something way cooler than I had imagined.” Clark’s meticulous, calculated style is unique among Richmond’s excellent cadre of big hitting, big beat drummers. “Scott comes from a different place,” says Burton. “He’s so comfortable playing free… not playing time but the sense of time is always there.” Clark, whose form is such that he wears drumsticks down to a perfect point, is central to the unit’s sound. By combining precise, rudimentary beats, a sweeping sense of time, and sonic textures that jettison traditional backline drumming, Clark provides necessary structural integrity for GitD’s intense improvisational style.

Burton’s compositions generally feature melodies that include counterpoints for one or both horns. A tune will move through a fairly standard head before being deconstructed for solo and free sections. Although saxophonist John Lilley, who replaced Jason Arce after his departure to New York, “isn’t as comfortable playing over fast, weird changes as Arce, he really opens up in the free sections.” Lilley’s solos channel the style of a past era. Covering a wide dynamic range, he plays with an exuberance that makes academic concerns secondary. Trombonist Reggie Pace’s signature voice really fits in this group—he’s able to utilize his seemingly endless repertoire of tonal variations and conversational phrasing. Bassist Cameron Ralston epitomizes a musician equally comfortable with being a capitvating solo and conversational voice as he is an asset to the band’s sturdy foundation. Burton stays occupied directing the group and comping with oddly voiced, open chords, but also solos with rapid fire intensity, punctuating the groove with bursts of sound from his undistorted, acoustic sounding archtop.

When asked to compare Richmond’s sound with other scenes, Burton noted Richmond players tendency to “improvise out of the song…it’s a more compositional approach to soloing.” This is a decidedly good attribute, and one that GitD aptly demonstrates. Despite extended group improv and free sections, and a affinity for the outside sound, one never gets the sense that GitD is chopping out interchangeable solos, regardless of their technical proficiency. Whether playing a Burton original or an adapted John Carpenter movie theme, GitD challenges themselves and listeners to observe boundaries and cross them, and to listen and play in the moment.