Boots of Leather will perform at RVAjazzfest with Steven Bernstein, Fight the Big Bull, and Glows in the Dark on February 21, 2009, 8pm, at The Camel. Tickets are $10, all ages welcome. by Nathan Goodwyn Drummer Brian Jones wants to record 40 records by the time he’s 40. Last week, he turned 36. He’s […]

Boots of Leather will perform at RVAjazzfest with Steven Bernstein, Fight the Big Bull, and Glows in the Dark on February 21, 2009, 8pm, at The Camel. Tickets are $10, all ages welcome.

But not to worry, he says.

“I’m doing a session next week with a bunch of ringers. Jesse Harper (Old School Freight Train) is singing a bunch of tunes I wrote.”

“The idea is to look back and say, okay, in 2009, I did a standards record. It was time to do that on some level. I love playing standards.”

His hunger for playing and recording music, along with obvious talent and skill, have kept Jones at the forefront of music and creativity in Richmond for almost two decades.

His life has been devoted to music. Things have worked out pretty well along the way.

Not surprisingly, Jones suggests that life on the road with Agents of Good Roots, probably the most talented rock band that Richmond has ever produced, was the thing that created openings for him in so many other musical situations.

“I was on the road all the time and was listening to music and reading books. That’s basically all I would do all day.”

These moments alone with his headphones led to the creation of the Velvet Underground-inspired group Boots of Leather. 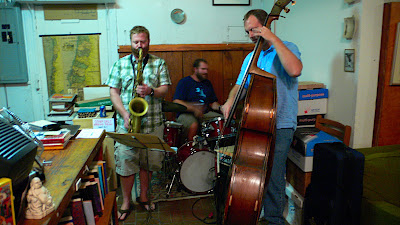 “I started listening to Dave Douglas a lot. There was a period of time where jazz players were recomposing and rearranging a bunch of older music. Dave Douglas did a series of records where he did Booker Little, Wayne Shorter, maybe a few other guys. I admired what Dave was doing so much. Every record was so good, and he set such a high standard.”

“As I started to put out records myself, I knew I eventually would like to try a project like [Boots of Leather]. I didn’t want to use a jazz musician as the primary source. I wanted to use a rock band as the source.”

The decision to go with Velvet Underground as the inspiration for the group was logical given Jones’s roots. He’s a trained jazz musician but his sensibilities as a player are tied to rock.

“I grew up listening to rock: Led Zeppelin, U2, Rush, David Bowie, and others. The inspiration for [Boots of Leather] could have just as easily been Neil Young. A friend of mine loaned me a bunch of Velvet records. It was just what I happened to be listening to at the time.”

Jones credits jazz for his willingness to try most anything as a musician.

“Learning how to play jazz teaches you to be very flexible,” he says. “I try to approach anything I’m playing from that mindset. You try to keep an open mind. As a jazz musician your goal is to try to make it different every time. Jazz musicians are trained to do that. You could take what I did with the Velvets [and] you could do anything else.”

For Jones, Boots of Leather has always been about that sense of adventure and flexibility. “It started with JC [Kuhl, saxophone] and John Sullivan, who now plays with a really successful pop group [Jack’s Mannequin, an internationally-known alternative rock band based in Orange County, California]. We had a great first rehearsal together and it sounded good and developed from there. Randall Pharr is on bass now and JC is still with me.” 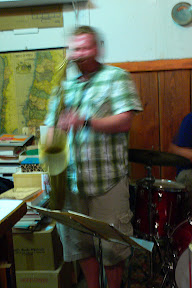 But people may have the wrong impression about the group in an important sense.

“Sometimes the readings are more straight ahead but if people even recognized the tunes as Velvet tunes, I would be pretty surprised. People thought we were going to be a Velvet Underground cover band. The idea was to take someone else’s music and rip it apart, put it back together.”

The name “Boots of Leather” comes from a characteristically enigmatic Velvet lyric, “Venus in Furs,” recorded on The Velvet Underground & Nico in 1966. That track in particular features John Cale on viola and Lou Reed playing a guitar on which all of the strings are tuned to the same note (an “Ostrich guitar”). What results is a sound principally based on melody and rhythm, not so much on harmony or counterpoint. The tune feels more like Ravi Shankar than rock and roll.

“The rap on the Velvets has always been that Lou Reed is a provocative lyricist and all that, but I became interested in the lack of harmonic structure and dissonance and the strong melodies. The melodies were just beautiful to me.”

Jones’s iconoclasm has earned him the respect and admiration of myriad musicians in Richmond and beyond. He is in high demand as a session player. He teaches daily, balancing time between students at William and Mary, University of Richmond, Collegiate School, Virginia Commonwealth University, and other locations—all of this as well as taking care of his young family. He has two daughters, ages 5 and 2, and his wife is an attorney.

Jones juggles a challenging schedule that would threaten to wear anyone down. His family and his sense of routine seem to help keep him grounded.

“The kids are up at 6:30am every day, so that’s when I get up. Doesn’t matter if I had a gig the night before and got home at 2am. They need to eat breakfast.” He also works out regularly at the YMCA. “Typically I get in there around nine in the morning three or four times a week to run and workout.”

“My older daughter is really coming into her own. She sits at the piano and plays a few notes and says she’s writing a tune. It’s pretty cool to watch.”

He seems not to focus on the fact that he is one of the most admired and imitated musicians in town, and he doesn’t think much about the respect he’s earned. All of the focus is on the music he’s creating in the moment, whenever it comes.

“Tonight I’m playing percussion with Fight the Big Bull and all I’m thinking about is, ‘How are we going to approach it and what are we going to play?’ I’m just thinking about what’s happening right now. If someone likes what I’m doing, I’m pleased. To me it’s about opportunity. I just want to keep playing, teaching, recording, performing, as long as I can. I do look at developing and helping people who are younger than me, people like [drummers] Pinson [Chanselle] and Scott Clark. My attitude is, ‘here’s what I’ve done, but I’m not saying it’s the way.'”

“People need to find their own voice.”