It’s going to open across the street from the GRTC bus depot. But more meets the eye to this new restaurant. It will give Richmond something that no restaurant currently does. And will likely launch the career of young chef. We look at it more closely.

Men laying pavement for a parking lot on the side of a building on 2416 W. Cary Street in the Fan eye me with the look: What the hell are you doing here? I can’t blame them. Ostensibly, there’s nothing of interest to see. Across the street is the rather superfluous GRTC bus depot. Where I’m standing is outside of what, for many years, was Cliff’s Honda: where riders of motorcycles, scooters, and jet skis could ogle the latest editions of multimodal transport. It’s long gone now.

I knock on the glass door and a man with a white and well-trimmed beard answers, eyeing my press credentials. He’s Alan delForn, one of three partners of [Selba] restaurant that will, come next month, open its doors.

“I’m here to see Abram,” I say. He points me to the kitchen.

There’s Mediterranean tile lined across the floor. The unblemished metal glimmers in the phosphorous lights. Several are men turning screwdrivers, opening packages, and moving about, making the kitchen that much closer to being fully functional.

Abram Jackson is younger than I imagined. He shakes my hand, smiles, and looks me in the eye. “Let me give you the tour,” he says.

We start in the main entry. Above us, running to the rear of the new restaurant are large, almost over-sized in appearance, skylights that let the sun in yet keep away the humidity of this June afternoon. To our left is a long bar, on which documents, tools, and various other construction accoutrement. I suppose one bartender could tend the bar, but its size beckons for two–if not three–to staff it when it opens next month. 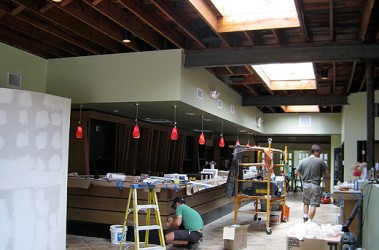 To our immediate right is a dining area with booths, where freestanding tables and chairs will go. Immediately ahead is a space that can be closed off by large dark brown doors, but they’re open now. It’s a room designed to accompany parties, meetings, general outings, and will offer a flat-screen television.

In the back is the “jewel,” Abram tells me. It’s the Garden Room. Tiled very much in a Tuscan motif, the room will accommodate approximately 50 people. It will also accommodate “over 50 tropical and sub-tropical plants.” In here Selba will grow fresh herbs, tomatoes, cucumbers, and other edible vegetation; they will grow 5 different types of citrus and at least one tiny banana plant. 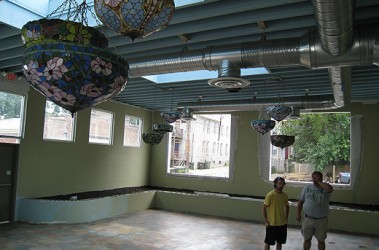 “We want to empower people to eat better,” says Abram, when our tour returns us to the kitchen and we chat about Selba. There will be roughly 25 items (appetizers, main courses, desserts) on the base menu that will run year-round. They will also offer five to six season-appropriate daily specials in addition to their base menu. When I ask him about how health-conscious Selba is, he simply walks away.

I suffer a momentary bout of panic.

I’m relieved when he returns with a notebook open to a specific page. At the top is the header “Rank of Importance.” Bulleted below are these adjectives: Healthy, Creative, Cost Effective, Sustainable. Before me is a visible ideology; Selba’s modus operandi. Abram turns a bit sheepish. Although sustainable is the last item, it is by no means unvital to Selba’s identity. Every item on the menu will indicate to their guests just how local Selba’s locally-sourced food really is–such as the chicken dumpling. They’re Abram’s favorite, and use free-range chickens from Amelia County served in a consommé broth with vegetables. Abram plans to put information and biographies of local farmers with which Selba partners in the restaurant.

“Food really is comfort,” Abram says. “We want people to come here and have that experience.” Selba will offer “contemporary comfort food,” popular favorites that are “rich in flavor, but not rich in sugar.” His passion and emphasis convinces me that health is, indeed, Selba’s first culinary maxim. He tells me that they will make available nutritional facts upon request along with indications of an item’s vegetarian, vegan, dairy and gluten-free incarnations. One gluten-free dish to anticipate is their scallops with linguine: puréed raw scallops that are then pushed through a pasta extruder so that the scallops become pasta. The dish will be served wtih a coconut seafood broth.

Abram began his restaurant experience working at Bookbinders in 2000, “where I decided to make culinary arts a career.” He became an executive sous chef in 2004. “I decided to leave to pursue another career direction” in 2009. In December of that year he talked with Alan delForn, a co-owner of Star-lite, and Todd Boyd, a local realtor. The trio saw eye-to-eye-to-eye about the concept, the food, and the experience. Virtually everything that needed to be agreed upon by potential partners. But nothing happened. It wasn’t until August of 2010 that Abram heard from Boyd. Do you want to be the Executive Chef? Sure.

“And that was that,” says Abram.

The “that” to which Abram refers is the dream for which many chefs across world pine: he’s helped start a restaurant, designed the kitchen, and will be in charge of those wearing kitchen whites. Workers and employees now unpack, install, and screw in much of what Abram planned back in December 2009 for their opening in just a few weeks.

So, how does it feel?

“It’s pretty cool,” he says, the underemphasis of the statement curling an infectious grin across his face.