RCPD wants to know: Is this your python?

Currently, there are no leads on the snake’s owners. This morning, we spotted this tweet from the City of Richmond’s official Twitter account, along with this photo of Lt. Dan Minton and a special new friend: 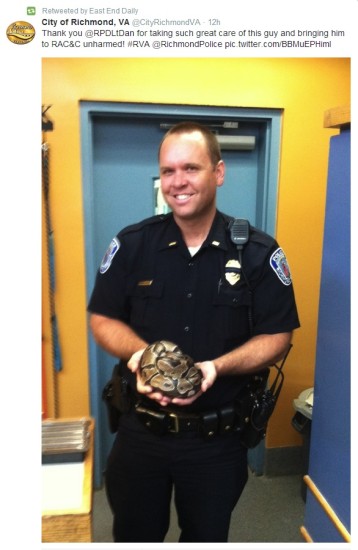 It appears someone lost their pet python. And on Mother’s Day, no less.

It was a Sunday, it was Mother’s Day, and there were reports of a snake loose in Chimborazo Park. A lot of people might have wanted to put a lot of space between themselves and Chimborazo Park upon hearing that news, but not Richmond Police Lt. Daniel Minton.

According to WTVR, Lt. Minton said he found the snake “In the back of the park”, and took the critter home with him. The python is currently residing with Richmond Animal Control.

Featured image courtesy of: Lt. Dan Minton
Photo courtesy of: the official twitter account of the City of Richmond