Rahim AlHaj Iraqi oud Albequrque, NM A 5,000-year-old musical tradition from the heart of Mesopotamia is alive and well in – well, Albuquerque. It is here that renowned Iraqi oud virtuoso Rahim AlHaj, who in 1991 made a harrowing escape from Baghdad and Saddam Hussein following the Persian Gulf War, today makes his home. Now […] 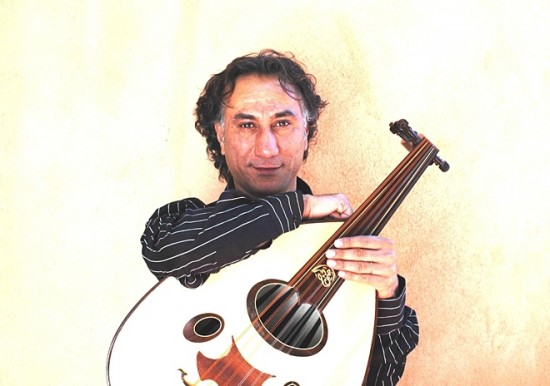 A 5,000-year-old musical tradition from the heart of Mesopotamia is alive and well in – well, Albuquerque. It is here that renowned Iraqi oud virtuoso Rahim AlHaj, who in 1991 made a harrowing escape from Baghdad and Saddam Hussein following the Persian Gulf War, today makes his home. Now sharing his thoughtful and expressive compositions and masterful improvisations with audiences across America, AlHaj is a cultural ambassador for the deep musical heritage of his homeland.

The short-necked Arabian lute called the oud is central to Iraqi music. The oud originated in this region over 5,000 years ago, and is the ancestor of the lute family of instruments that includes the guitar. But unlike the guitar, it is fretless. Traditional Iraqi music is organized into a series of maqamat, or modes. Each maqam has a distinctive scale made up of several pitches and specific melodic formulae. Each is often associated with a certain mood or season. Unlike western music, which is based on whole and half tones (12 semitones altogether), Iraqi music is based on 24 quarter tones.

AlHaj began his musical training at the age of nine, and was soon recognized as a phenomenal talent. Studying under the legendary Munir Bashir and Salim Abdul Kareen at Baghdad’s Conservatory of Fine Arts, Rahim established himself as one of the world’s foremost oudists. But AlHaj’s political activities and refusal to write music in praise of “the great” Saddam got him into trouble with Hussein’s repressive regime. His composition entitled “Why,” based on a poem by a longtime friend who lost his legs in the Iran-Iraq War, landed him in prison where he was tortured and beaten. His mother sold almost all of her belongings to acquire false documents so that Rahim could make an escape.

In 2000, AlHaj was granted political asylum in the United States, landing in Albuquerque where he got a job as a security guard for $6 an hour. In debt and not satisfied with his new career, AlHaj rented a music hall at the University of New Mexico and organized his first U.S. solo concert. It was a sellout and he began receiving offers to perform from around the country. Today, AlHaj’s virtuosity is receiving that national attention it merits. His Smithsonian Folkways recording When the Soul is Settled: Music of Iraq was nominated for a Grammy award in 2008, and he has collaborated with the likes of Bill Frisell and Ottmar Liebert. Performing with AlHaj at the festival is Issa Malluf, an Albuquerque-born, world-class percussionist who previously studied and toured with revered Indian tabla virtuoso Zakir Hussein.

AlHaj draws upon his experiences of life in exile and settling in the U.S. for his most recent compositions. Asked about how his music relates to the present world political situation, Rahim answers, “The music contains the drive for the message of peace and compassion and love…. In Iraq right now, as in most of the world, what is vital is what we can find . . .that it brings us together, not so much that tears us apart. I try to talk about these things, about the common links between us all . . .”