Paul Dahlin and the Äkta Spelmän Swedish American fiddlers Äkta (ék tuh), a Swedish word meaning “genuine” or “true,” is the name of this fiddle ensemble from Minnesota dedicated to the keeping of traditional Swedish music. The group’s leader, Paul Dahlin, fiddler, violin repairman, composer, festival organizer, and cultural spokesman, is the American “taproot” to […] 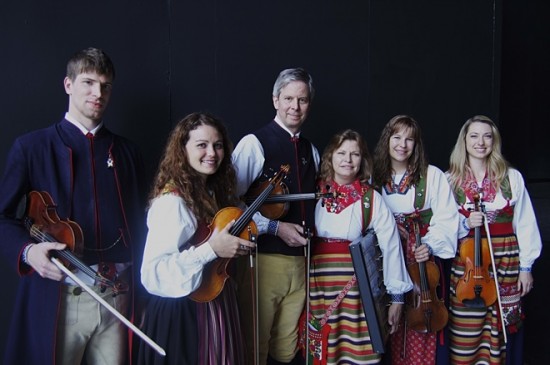 Äkta (ék tuh), a Swedish word meaning “genuine” or “true,” is the name of this fiddle ensemble from Minnesota dedicated to the keeping of traditional Swedish music. The group’s leader, Paul Dahlin, fiddler, violin repairman, composer, festival organizer, and cultural spokesman, is the American “taproot” to one of Sweden’s most venerable and widely admired varieties of regional music, stemming from the Dalarna province. Even fiddle devotees in Sweden look to him as the principle repository of a treasured old repertoire and performing style that has virtually been forgotten in their own homeland. While his music is archetypically Swedish, the story of his cultural inheritance and special artistic motivation is quite American.

Paul’s grandfather, Ivares Edvin Jonsson, departed his native Rojerasen (in the Dalarna province) in 1924 at the age of 19. When he left, his mother would not let him take his treasured fiddle with him. “You are going to America to work, not to play,” she told him. Several years later, he was reunited with his beloved instrument and spent much of the rest of his life in Minnesota passing forth his fiddling and fiddle-making traditions to his children and grandson Paul. Paul took up the fiddle in 1963 at the age of 9, and by the age of 17, he was performing regularly with his elders at Swedish-American events.

Before his death in 1984, Paul’s grandfather was “discovered” by fiddlers from Sweden who were amazed by his faithfulness to the regional style and repertoire that was thought to have disappeared. When grandson Paul began teaching Swedish instrumental music at the American Swedish Institute (ASI) in Minneapolis, Swedish colleagues lauded his role as an important purveyor of deep Swedish musical tradition, and as a source of vitality for a tradition thought to have been lost. The ASI Spelmanslag (fiddlers group), for which Paul has served as musical director since its inception, was formed in this same year. In 1994 Paul was awarded a National Heritage Fellowship by the National Endowment for the Arts, recognition of his outstanding contributions as a keeper and teacher of Swedish American musical traditions.

The popularity of the adult spelmanslag led to the creation of a youth fiddling group at the ASI. As one might imagine, Paul has invested much time and energy in teaching and encouraging this new generation of musicians. Among them is Paul’s son, Daniel Dahlin, an emerging leader and a fine fiddler whose beautiful compositions are adding to the traditional repertoire. Three other fine young fiddlers will also join Paul at the festival, along with Paul’s wife Marikay Dahlin on stand-up bass/zither, offering a rare chance to experience the gorgeous harmonies and haunting melodies of Swedish fiddle tradition.