The United States Geological Survey (USGS) confirms a magnitude 3.2 earthquake struck near Amelia Courthouse at 9:47 PM Wednesday night. The event took place 0.7 miles beneath the surface of the earth, which is a relatively shallow earthquake, according to the federal agency.

No damage was confirmed at press time, but reports from those who felt the tremor began pouring in from viewers of local news outlets and Twitter, a majority of which were based in the West End.

A map released by the USGS shows the intensity of the shaking, as reported by those who submitted reports following the quake, by location. 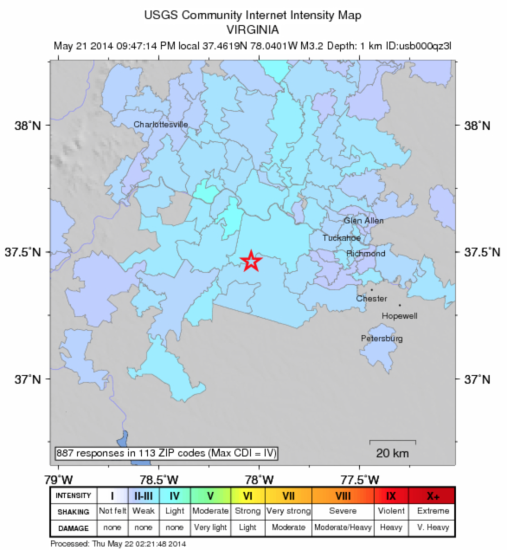 West End residents are no strangers to earthquakes and aftershocks. Several larger quakes, including the magnitude 5.8 tremor that struck Louisa County on August 23rd, 2011, were felt much more strongly in the Short Pump and Glen Allen areas than the rest of the city. Dozens of aftershocks occurred in the months following, and well into 2012. Wednesday’s event was considered a new earthquake, unassociated with the earlier quakes and aftershocks.

The 2011 earthquake, centered near Mineral, was felt as far away as Alabama to the south and New York City to the north and even caused major damage to the Washington Monument in D.C.

If you didn’t feel tonight’s event, it’s important to consider that, as former RVANews meteorologist Dan Goff pointed out, magnitude is logarithmic. This means a 3.2 magnitude quake is 1,000 times less powerful than a 5.8.

Tonight’s earthquake was felt from Washington D.C. to Norfolk, according to this broader graphic compiled by The Weather Channel. 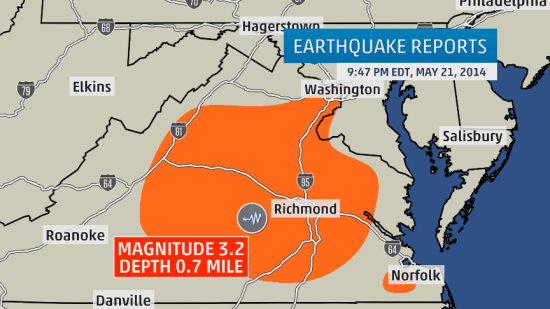 Did you feel tonight’s earthquake? Leave your accounts in the comments below or send photos and video to us here.