Living in the Moment

The entire White House grounds and Lafayette Park were surrounded by DeeCee transit system buses, parked snugly end-to-end. Cops in radical-looking riot gear were stationed inside the bus-wall perimeter every few yards. As the gathering Baby Boomers were funneled into the designated demonstration area — the grassy ellipse south of the White House — the […] 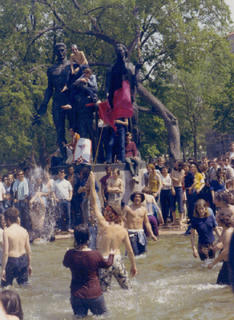 The entire White House grounds and Lafayette Park were surrounded by DeeCee transit system buses, parked snugly end-to-end. Cops in radical-looking riot gear were stationed inside the bus-wall perimeter every few yards. As the gathering Baby Boomers were funneled into the designated demonstration area — the grassy ellipse south of the White House — the temperature had already reached the upper 90s before noon that blue-skied Saturday.

On May 9, 1970, the hot still air heightened the mounting sense that anything could happen.

Why not? The previous Monday four students had been shot to death on Kent state’s campus during a Vietnam War protest rally. Three days later two more students were killed at Jackson State.

Unlike the other large anti-war demonstrations, which were planned for months, this time it all happened spontaneously. Those on-campus killings moved many who had never marched in protest or support of anything before to drop what they were doing and set out for Washington, D.C. to live in the moment.

For some of us old enough to remember it, the mayhem on Virginia Tech’s campus a year ago brought to mind the shocking events of this week, 38 years ago. It served to remind us that college campuses are customarily thought to be sanctuaries, supposedly removed from the ugliest realities of modern life.

At the war protest in DeeCee some of the more experienced hands had come out prepared with provisions for a long day. Even more had not. Estimates ranged widely but most reports characterized the size of the crowd at well over 100,000. Home-made signs were everywhere, including occasional pro-war placards that denounced the protesters. The smell of pot burning gave the gathering a Rock ‘n’ Roll festive feel, too, as a series of speakers took turns ranting over the massive sound system of Woodstock proportions.

Behind the podium a black man was lashed Christ-like to a huge cross, perhaps to dramatize to the largely white crowd who was doing most of the dying in Vietnam. As a convoy of military vehicles suddenly drove into the area the crowd booed.

When it turned out the troops were bringing in water for the thirsty the booing stopped. Dehydration was a problem.

After the last speaker the police stood by watching thousands of chanting citizens, most of them under 25 — filled with righteous indignation — spill out of the park to stretch a line of humanity around the wall of buses. No effort was made to prevent the mob from marching into the streets which had already been blocked off. The march flowed north, then west, from one block to the next. Long lenses peered down from the roofs of those distinctive squat DeeCee buildings downtown.

Untold numbers of fully-outfitted soldiers were crammed into basements, visible in the doorways, awaiting further orders. Until that day’s bizarre uncertainty most of them had probably been glad to be anywhere other than Vietnam. A cheer went up from the marchers when a determined kid managed to get on top of a bus to wave a Viet Cong flag.

The cops quickly hauled the flag-waver off but a commotion ensued and the scent of tear gas spiced the air. Hippies who had been wading in a fountain to cool off scaled a statue to get a better look, as I snapped pictures with my new 35mm single lens reflex.

The next day I was back in Richmond for yet another gathering of my generation. Staged in Monroe Park, Cool-Aid Sunday featured live music and various information booths and displays were set up, aimed at helping young people with their troubles. They included the Fan Free Clinic, Jewish Family Services, Rubicon (a dry-out clinic for drug-users), the local Registrar’s office, Planned Parenthood, Crossroads Coffeehouse, etc.

Although it was not a political rally the crowd assembled in Monroe Park, while smaller, was similar in character to the one in Washington. No one was seriously injured at Saturday’s tense anti-war demonstration. Then, ironically, a 17-year-old boy — Wilmer Curtis Donivan Jr. — was killed on Sunday in the park in Richmond when a four-tiered cast iron fountain he had scaled suddenly toppled.

It seems I took no pictures on Sunday, the 10th, but the photograph of Donivan falling to his death that ran on the front page of the Richmond Times-Dispatch on the Monday that followed is one I’ll never forget.

No doubt, the momentum from the extraordinary week which preceded that fateful Sunday in Monroe Park was in the air as Donivan opted to climb that old fountain, not unlike other hippies in DeeCee the day before.

It set the scene.

In 1970 the USA was becoming ever more bitterly divided over the Vietnam War. Living in the moment was killing off the young and unlucky wherever they were.