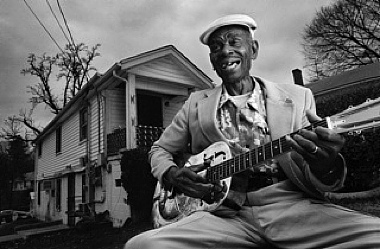 The blues from the Piedmont – the hilly region between the Appalachians and the low-lying coastal areas that stretches through Georgia, South Carolina, North Carolina, Virginia and Maryland – is one of the oldest forms of the blues. It draws heavily on earlier fiddle and banjo string band music that was equally popular among rural blacks and whites, and served as a staple at country parties, hoedowns and square dances.

John Dee Holeman was born in rural Orange County, North Carolina in 1929. At age fourteen, he began singing the blues and picking the guitar, learning from older Piedmont blues musicians who had learned directly from master bluesman Blind Boy Fuller. By his mid-teens, John Dee was performing for pay at house parties, community celebrations, corn shuckings and pig pickings near his home. When he moved to Durham in 1954, he began to incorporate more modern, electrified blues into his rural acoustic style.

John Dee has toured extensively in the United States and abroad, appearing at Carnegie Hall, in North Carolina’s “Black Folk Heritage Tour” and internationally with the United States Information Agency’s Arts America Program. In 1988, he received a National Endowment for the Arts National Heritage fellowship, the nation’s highest honor for a traditional artist. He was also honored with a Folk Heritage award by his home state of North Carolina in 1994. In recent years, John Dee has become a Music Maker Foundation artist, releasing three albums on its label. On his 80th birthday in 2009, his many friends presented him with a new electric guitar, which has helped his master blues stylings and expressive voice sound as fresh as ever.

“Before his back got too stiff,” as he says, John Dee Holeman would occasionally set down his guitar and show off his fantastic buckdancing skills. Buckdance is a traditional Appalachian freestyle solo dance style with roots in Africa and Europe, particularly the British Isles, which emphasizes percussive rhythms created by the heel and toe. A precursor of tap, buckdance was popularized by minstrel performers in the late 19th century. Often playfully competitive, it has long been a feature of rural dances and house parties. Willette “Willie” Hinton is a buckdance master, whose charisma is a match for his fancy footwork. Hinton hails from the North Carolina Piedmont and his style of buckdancing reflects his regional heritage. Willie learned to dance from his mother, Algia Mae Hinton, a great country blues musician and dancer, who, like her son, believes that music and dance are inseparable.

Phil Wiggins is arguably America’s foremost blues harmonica virtuoso. While rooted in the melodic Piedmont or “Tidewater” blues of the Chesapeake region, his mastery of the instrument now transcends stylistic boundaries. Born in Washington D.C. in 1954, Phil Wiggins achieved worldwide acclaim over three decades as one half of the premier Piedmont blues duo of Cephas & Wiggins. Since the death of guitarist and singer John Cephas in 2009, Phil has brought his harmonica wizardry to bear in a variety of musical collaborations – now with John Dee and Willette.

As a child, Wiggins spent summers at his grandmother’s in Alabama, and in church there absorbed the sounds of old-time hymns sung in the traditional call-and-response style. Phil was attracted to the blues harmonica as a young man, and began his musical career with some of Washington, D.C.’s leading blues artists, including Archie Edwards and John Jackson. He attributes his basic style to the years spent accompanying locally-noted slide guitarist and gospel singer Flora Molton. In 1976, Phil met bluesman Cephas and, with pianist Wilbert “Big Chief” Ellis and bassist James Bellamy, they formed the Barrelhouse Rockers. A year later, the duo of Cephas & Wiggins was born. In addition to his skills on the harmonica, Wiggins is also a fine songwriter.