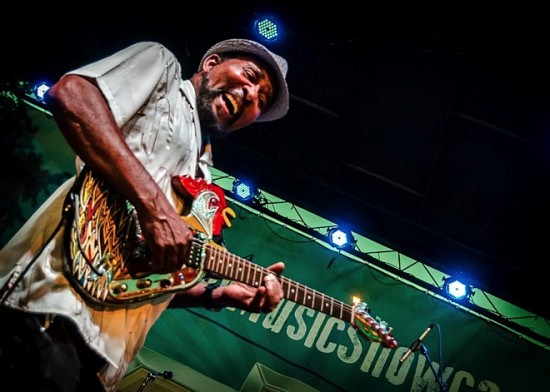 When it comes to Delta blues, Mississippi’s James “Super Chikan” Johnson rules the roost. Both a folk musician and artist, he’s an American original in the tradition of Ironing Board Sam and Bongo Joe. Super Chikan picks and plucks on a variety of unique guitars that he makes himself, using whatever materials are lying around the yard: flattened gas cans, ceiling fans, broomsticks. He hand paints each amazing “chikantar” with detailed scenes of the Delta. The result is a riot of image and color, and, like the music Johnson makes on his creations, infused with that special Super Chikan joie de vivre.

“Making one of my guitars is like writing one of my songs. I let the words and feelings take me from the beginning to the end…As it shapes up, I gain more ideas. Just let it go where it goes.”

James Louis Johnson was born in 1951 and spent his childhood in the Mississippi Delta, moving from town to town, working on his family’s farms. As a young boy, he was quite fond of the family chickens, and used to talk to them. So his friends gave him the nickname “Chikan Boy.” His first instrument was a one-stringed “diddly bow,” a board with a piece of baling wire stretched end to end. He switched to guitar and throughout his youth continued to soak up the blues from his uncle Big Jack Johnson and neighbor Sam Carr.

For several years, Johnson drove a truck for a living, making up songs to pass the time on the road. By the mid ‘90s, he was playing with notable regional musicians. However, wanting to follow his own muse, he struck out on his own in 1997 with his debut album, Blues Come Home to Roost, and followed this up with several more. These recordings brought Johnson increasing attention and offers to tour throughout the United States, Africa, Japan, and Europe. In 2004, “Super Chikan” received the Mississippi Governor’s Award for Excellence in the Arts and his latest CD, Chikadelic, took home a Blue Music Award for best Traditional Blues Album. His jaunty all-female band, “The Fighting Cocks” features Laura “LaLa” Craig, who pummels the keyboard, the talented Heather Tackett on bass, and Johnson’s daughter, Jamiesa “Pinkey” Turner (a.k.a. “Little Chikan,” on drums.