Matt Paxton has seen some shit.

There were the countless fecal pellets from the 5,000 rats that’d overrun a home. Before Paxton could clean the house, he had to round up the rats.

Then there was the lady that had 18,000 gallons of urine bottled and stored throughout her Seattle home. “Head high of glass and plastic bottles full of urine,” Paxton said, recounting some of his particularly gross jobs while sipping a beer outside Strangeways.

The state of Washington requires that any waste liquid totaling over 10,000 gallons must go into a waste truck. So he and his crew poured each ounce of urine–from bright yellow to the leafy green–into a rented truck before it was hauled away for disposal. “Took three days just to properly dispose of the urine,” Paxton said. “Then we had to clean the house.”

But the worst job he ever had was to remove 60 cats from a refrigerator. The owner of the cats wanted to cremate her beloved house pets, but because she lacked money, opted for “temporary” cold storage.

“Imagine leaving all of your vegetables in the fridge and they all decay and it liquifies under that bottom drawer,” Paxton said. “Cats do the same thing.”

“It was the most horrific thing I’ve seen in my life.”

The owner of the locally-based Clutter Cleaner and host of the reality show_Hoarders_, Paxton has delved head first into house after house of muck, slime, and nastiness and come away an advocate, a TV star, and a better man for it.

But before he found success cleaning the dirt and grime of others, Paxton had the muck of his own life to wade through.

Paxton says his life really began when a bookie broke his nose over a $40,000 gambling debt.

He was in Lake Tahoe working at Caesars Palace running regression analysis1 for the gambling giant. “A 24-year-old living in a casino?” Paxton said. “It was awesome.”

Broken-nosed in Tahoe was a far cry from being a 16-year-old sitting in his father’s jacuzzi atop Church Hill in the company of people like Andrew Thornton and Sarah Paxton (unrelated), founders of La Différence.

“At a very early age I was hanging out with some pretty high-end entrepreneurs,” Paxton said. He was surrounded by them because his father, Ed Paxton, was a local staple among the city’s advertising, marketing, and entrepreneurial communities.

“We’d brainstorm new businesses and we would come up with new ideas,” Paxton said. “I didn’t know at the time he was teaching me to be an entrepreneur. I thought I was just hanging out with my dad.”

Paxton went on to study economics and business at the recently turned co-ed2 University of Mary Washington. “I was just excited to be at a school that was 80 percent women.”

Girls were about the only topic Paxton was interested in while in school. “I really struggled with [courses] because it was all theory. There was nothing practical,” he said. “And I could never get past that my professors were teaching me how to run a business and none of them had businesses.” It wouldn’t be the last time Paxton side eyed the status quo.

After graduating college in 1997, Paxton took a job at the local Federal Reserve. He knew immediately that the suit and cubicle approach to working wasn’t for him. “I knew on the first day I sat down: ‘Oh my God, I don’t want to do this'” he said. “I made it through my six-month review, and they told me everything I did wrong.” Paxton then asked what he did right. Their response: “‘We don’t go over that in review.'”

“I quit right there.”

Eventually, he made it out to Tahoe. After skipping town with a broken nose, Paxton returned to Richmond just before his dad died of cancer. Paxton was left some money which he used to travel to Hawaii and Germany. “Just traveled everywhere and started coming up with ideas.” None of them worked.

First he created a wet suit company. “It failed,” he said.

Then a flip-flop cleaning business. “It failed.”

He then tried marketing. “Failed at that.”

But success wasn’t entirely elusive. Paxton donated time at the local Comfort Zone Camp, wherein children who’ve suffered the death of a parent, sibling, or caregiver develop relationships with volunteers, like Paxton, to ease their bereavement.

“I just fell in love with that,” Paxton said. “As a recovering addict, I got totally addicted to helping people.” 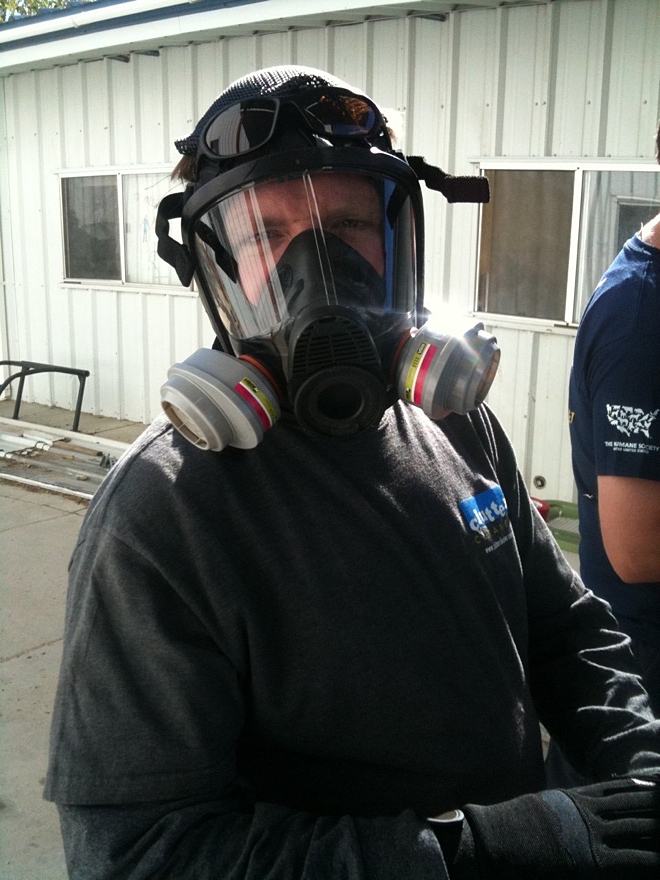 He had a eureka moment one day while cleaning out his grandmother’s home. “If I treat my grandma with respect and treat her nicely and awknowledge all of her hardship, she’ll let stuff go,” he said. “And if you yell at her and complain [about her having too much stuff] like everybody else does, nothing goes.” That epiphany would be the guiding force behind the business he’d create in 2006, Clutter Cleaner.

Paxton remembers the first home he cleaned as a businessman. “I’d never seen anything like it,” he said. “It was to the roof. It was above my head.” It was his first experience with a hoarder.

But despite his internal panic, Paxton kept a carefree exterior. “The first thing you say no matter what: ‘Oh, this isn’t that bad.'” That’s what he said on his first job, and every job since, not matter how bad it really is.

Paxton recalled one of his earlier jobs, an estate sale for a man that had recently committed suicide. While he and a crew cleaned out the home of hoarded goods, a man watched on.

“The guy that died was a great old guy and had a relationship with his partner,” he said. “His family never accepted him and he killed himself.” Paxton and his crew were readying a home while the last occupant could do nothing but look on.

That experience helped Paxton understand the psychology of a group of people he’d become intimately familiar with. “There’s a reason this guy hoarded like this. He had a lot of trauma and never had anyone accept him.”

That lack of acceptance is what Paxton calls a trigger. Each hoarder experiences something that triggers their hoarding behavior.

“The trigger is always, always there. You just have to find it,” he said. “And the trigger is the awful stuff, and the hoarder doesn’t want to talk about it. The hoarder literally puts up that wall because they don’t want to relive the trigger. Often it’s rape or physical abuse, or death or loss of job, or some kind of disease…No one wakes up and says I want to put 300 cats and 18,000 gallons of my own [urine] in my living room.”

But most people don’t see the emotionally fragile state of the hoarder. They just see the mess. “There aren’t many groups in society lower than hoarders right now,” Paxton said. “They’re really looked upon as disgusting, filthy, low-life people” who seem lazy and stupid. 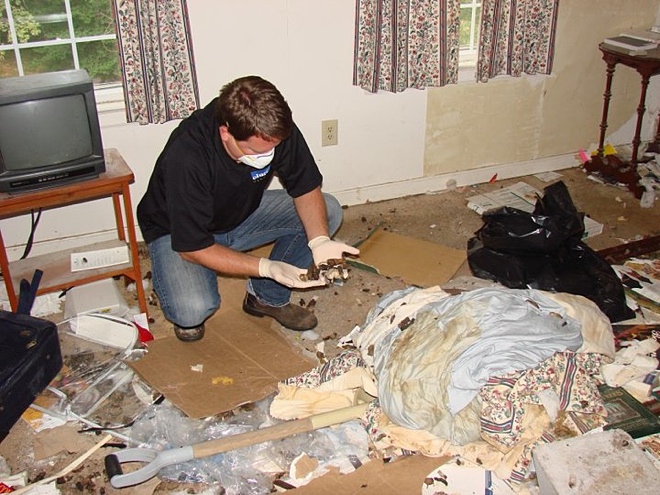 Paxton knows better. “I’ve had three hoarders that were contestants on Jeopardy,” he said. “[Hoarders are] usually brilliant. They’re often teachers or lawyers or doctors or nurses. They’re giving. They’re compassionate. Most of the stuff they hoard is not for themselves, it’s for other people.”

As a recovering gambler and someone who’s had numerous personal and business failings, to the point of considering suicide on two separate occasions, Paxton empathizes. “I get these hoarders. I get the trauma they’re going through.”

“Getting” that trauma involves what Paxton calls turbo bonding. “You heavily get to know that person inside and out,” he said about his work with hoarders. “At the beginning [they’re] scared to death of you. But if you use respect and compassion, and you earn trust, slowly, over time, you become really close to this person.” That’s when hoarders, like Paxton’s grandma, will finally agree to let items go.

It’s this approach to hoarders that helped create one of A&E’s most successful shows. A show that will soon return to the airwaves.

Paxton had no intention of being on TV, but he incessantly bugged someone who was. Peter Walsh is a professional organizer that wound up on TLC’s Clean Sweep in 2003 and was a regular on The Oprah Winfrey Show years later.

“I knew he was on TV and he would get lots of jobs” from people asking him to clean their homes, Paxton said. With so many offers, Paxton was sure Walsh had no way of taking each project on. “So my idea was: hey, give me those jobs, and I’ll give you a cut.”

The partnership never materialized. But in the late 2000s, A&E approached Walsh about participating in a new show called Hoarders. Walsh passed, but he gave Paxton’s number to A&E producers.

“They weren’t looking for talent, they were just looking for houses,” Paxton said. The producers offered Paxton $200 for every house used on the show that he sourced.

Days later, a producer flew out to meet Paxton. While being shown a local house of a hoarder, the producer lauded Paxton’s compassion and speaking abilities with the home’s owner. She asked if Paxton would be up for being videotaped for a few minutes. “I knew if I nailed this, I’m in,” Paxton said.

“Within a week’s time my life had changed,” he said. On Monday, life was normal. On Wednesday, Paxton learned he’d be a father for the first time. That Friday, Paxton was in Alabama filming his first show.

Just before the first episode of Hoarders aired, Verizon cut off Paxton’s cell phone service. He’d no money to pay his bill for three months.

“So I called Verizon and begged them, just begged them” to allow his phone to at least receive calls, hoping that his appearance on national television would lead to an uptick in clients. It did.

“The TV show took off,” he said. For a while it was the highest rated program on A&E and was even Emmy-nominated. Paxton went from having to finagle his way out of having his cell service turned off to appearing on Howard Stern and Good Morning America to promote the show and his business. 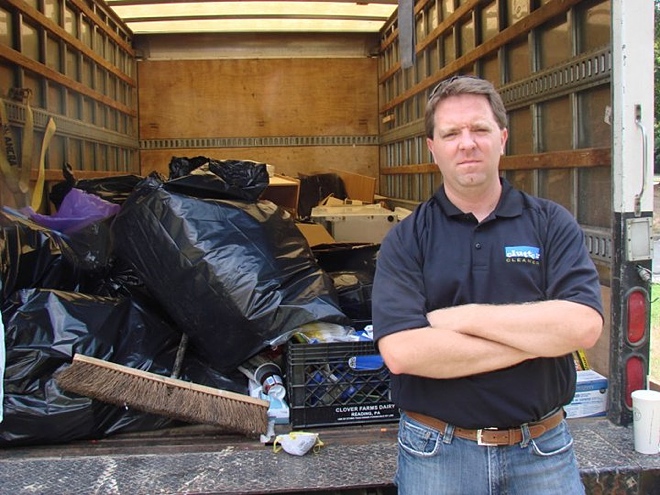 The second reason? “[Other people] just love seeing nasty stuff and it makes them feel better about themselves.”

Paxton made sure the nasty stuff shown on episodes got nastier and nastier. “I was smart enough to see that [the show] was ‘going gross’ and every week it got a little grosser,” he said. “I made it a point to do the job no one wanted to do.”

Those jobs took him all over the country, and today Clutter Cleaner receives so many job offers that Paxton has partnered with the ServiceMaster company to train franchises across the country to complete them. Paxton said he’s trained almost 30 franchises to date.

The main tenet of his instruction is that hoarders must be treated with respect. “This is someone’s grandma, you’ve got to treat [her] like she’s yours,” he said. “[I’m] just trying to get people to understand that hoarders are not crazy…Hoarders are good people. They’re just in a really bad way.”

Paxton knows that those really bad ways have paid his bills for the last several years. “I’ve made a good living off these people’s pain, and I am aware of that,” he said. But it’s for that reason Paxton continues to train, speak, and write about hoarders to change how people think of them. “I feel obligated to get it to that point where it’s acceptable to be a hoarder, [to where] you’re not a freak anymore,” he said. “Morally, I have to stick with this until they are accepted.”

“I tried to get rich in all of my other deals,” he said. Clutter Cleaner is different because its focus is different. “It’s so cool to see our business making a profit helping people,” Paxton said. “Focus on the people…focus on doing good and the money will come eventually.”