Héctor Del Curto’s Eternal Tango Quartet Argentine tango New York, New York The elegant, subtle, and intensely passionate Argentine music and dance called tango could find no greater expression than through the superb artistry of bandoneónist Hector Del Curto and his ensemble. A virtuoso player of the bandonéon, an accordion of German origin that is […] 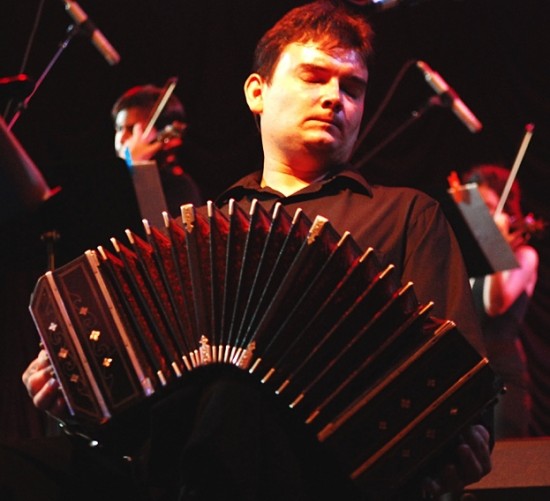 The elegant, subtle, and intensely passionate Argentine music and dance called tango could find no greater expression than through the superb artistry of bandoneónist Hector Del Curto and his ensemble. A virtuoso player of the bandonéon, an accordion of German origin that is the driving force and central instrument in tango orchestras, Del Curto masterfully leads his quartet and dancers through the intricacies of one of Argentina’s most famous musical exports, contributing to its global revival.

During the late 1800s, Argentina’s capital port city of Buenos Aires was a multi-cultural mix of Europeans, criollos, Africans and indigenous peoples. As is often the case, it was in the city’s bars and brothels where the musical traditions of these diverse groups began to mingle. One of the exciting hybrid forms that emerged from these cultural encounters was tango. While embraced by the lower classes, “respectable” Argentinians initially shunned tango. But its popularity eventually spread, and by the beginning of the 20th century, tango found its way to the European continent. The tango craze that subsequently swept Europe dramatically changed tango’s status at home. European acceptance legitimized this “lascivious” dance of low origins in the eyes of the Argentine elite. The 1920s ushered in the Golden Age of Tango, a period of creativity that produced legendary artists and permanently added the bandonéon to the tango orchestra. Tango became a national symbol of Argentina.

The Del Curto family has been a part of Argentine tango history through much of the form’s development. In the early 1900s, Héctor’s great-grandfather was a bandonéon player and composer in the Orquesta Típica Jazz Del Curto-Taranto. The musical torch then passed to Héctor’s grandfather, who introduced him to the instrument. By age 17, Héctor had mastered the bandonéon and won the title of “Best Bandonéon Player under 25” in Buenos Aires. This honor ultimately led to the opportunity for Héctor to play with the late Osvaldo Pugliese, whose tango orchestra was one of the most prestigious in the world. In describing Del Curto’s music, critics have nearly exhausted their seemingly inexhaustible supply of adjectives. Writer Adam Harrington summed it up this way: “Del Curto stuns us with his virtuosity; it will leave you breathless.”

Del Curto’s latest explorations of the tango have been centered in New York, now one of the largest tango communities outside of Buenos Aires. The Eternal Tango Quartet features Del Curto on bandonéon, Pedro Giraudo on double bass, Gustavo Casenave on piano, and Héctor’s accomplished wife, Jisoo Ok, on cello (“I have a good ear for women,” he wryly commented). Joining this top-flight quartet are two impassioned dancers, Ivan Terrazas and Sarah Grdan, who will perform the dramatic and intricate movements of Argentina’s beloved tango.