Fred Wesley & The New JB’s Jazz-funk Mobile, Alabama Musician, arranger, composer, educator and bandleader Fred Wesley is a towering figure in the world of funk music. An architect of the genre, and one of the most versatile and funky trombonists of all time, Wesley was the musical director and a featured performer with James […] 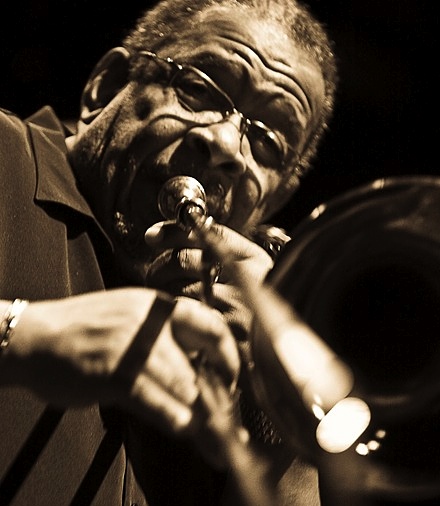 Musician, arranger, composer, educator and bandleader Fred Wesley is a towering figure in the world of funk music. An architect of the genre, and one of the most versatile and funky trombonists of all time, Wesley was the musical director and a featured performer with James Brown’s legendary band, the JBs. In addition to his pioneering arrangements and compositions for the Godfather of Soul, Wesley helped create a number of the greatest hits of Parliament-Funkadelic (some performed by Original P at last year’s festival), Bootsy’s Rubber Band, Ray Charles, Van Morrison, the Count Basie Orchestra and many more. To say that Fred Wesley’s music has withstood the test of time would be an understatement. He started his career as a teenager playing trombone for Ike and Tina Turner and now, many pop artists, including the likes of Janet Jackson and Nas, have used samples derived from recordings of his playing. Today, with a dynamic, handpicked group of explosive and versatile musicians, Wesley and his New JB’s are carrying the torch, and bringing in the funk in grand style.

In the mid-late 1960s, African American musicians blended soul music, jazz, and R&B to create funk: a rhythmic, danceable new form. De-emphasizing melody and harmony, central features of the funk sound are a strong rhythmic groove and extended vamps on a single chord – a set of characteristics ideal for a trombone player of Wesley’s musicality. Electric guitar and bass, Hammond organ, drums, and often a horn section for rhythmic counterpoint and harmonic zest, combine to create complex interlocking rhythms. Funk was a major influence on the development of disco and Afrobeat, and of course, go-go, the Chesapeake region’s homegrown subgenre, and funk is extensively sampled in house music and D&B, hip-hop.

After his time with the Count Basie Orchestra, “Funky” Fred’s focus took a turn toward jazz. He plays, records, writes and promotes its importance in an ever-changing musical soundscape, and makes a point of sharing his wealth of knowledge at educational institutions nationwide. Wesley is also responsible for a number of solo jazz projects, including “To Someone,” “Amalgamation,” “Comme Ci Comme Ca,” “Full Circle” and “Wuda Cuda Shuda.”

Today Wesley leads his own jazz-funk formation, the New JB’s, a logical evolution of his work with the greatest conceptualizers in funk and soul in the 20th and 21st centuries, and his trajectory and mastery in jazz. The New JB’s create a unique brand of jazz-funk that’s all their own, yet still grounded in the music of their funky forefathers.

Wesley fronts the group with distinctive vocals and his trademark high-temperature trombone playing. The JB’s rhythm section is stellar, with Bruce Cox and his apparent third arm on drums, and the eclectic Dwayne Dolphin on bass. Meanwhile, Peter Madsen kicks it on keys, Reggie Ward grooves on guitar, and Ernie Fields Jr. provides serious sustainable wind power on the sax, flute, and bagpipes, while the adaptable Gary Winters lends his own wind on trumpet.

Wesley’s delightful autobiography, Hit Me, Fred: Recollections of a Sideman, chronicles his more than half-a-century long musical career, affording readers insight into an apparently endless cache of stories about his experiences on the road with the legends of funk music. You might want him to autograph a copy. Though this dedicated, down-to-earth musician hasn’t yet seemed to notice, he’s become something of a legend himself.