Fendika Traditional Azmari music Addis Ababa, Ethiopia Hailing from Ethiopia’s capitol city of Addis Ababa is Fendika, a group of young torchbearers of traditional Ethiopian music and dance. Much like the griots of West Africa, the Azmari of Ethiopia Azmari is a social class of musicians and poets. Fendika takes its name from Fendika Azmari […] 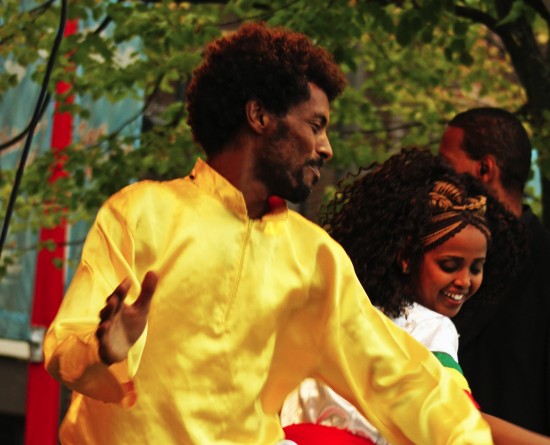 Hailing from Ethiopia’s capitol city of Addis Ababa is Fendika, a group of young torchbearers of traditional Ethiopian music and dance. Much like the griots of West Africa, the Azmari of Ethiopia Azmari is a social class of musicians and poets. Fendika takes its name from Fendika Azmari Bet (“Azmari Bet” translates as “House of Azmari ), a cultural center and performance venue run by star dancer and cultural advocate Melaku Belay. Fendika Azmari Bet is home to several traditional Ethiopian ensembles, and often hosts visiting performers of all styles from other countries. . Through this cultural center, Melaku has created the opportunity to showcase Ethiopian traditional celebrations, and spearhead projects that bring Azmari music and dance around the world.

Traditionally, Azmari in Ethiopia were not only known as skilled singers and musicians, but also as versatile entertainers and improvisers who could improvise on any topic offered up. Their repertoires included love songs, historic tales, and impromptu commentaries about well-known figures or audience members. Azmaris needed to be humorists, and excel in wordplay as well as singing. Typical Azmari instruments include the masenqo, a one-string bowed lute, the krar, a five- or six-string lyre, and goat-skinned drums.

Azmari could be itinerant musicians, attached to a noble court or local entertainers of myriad sorts. Religious and secular celebrations, such as harvest festivities, New Year’s parties, or possession ceremonies, all required the presence of Azmari performers to complete the event. Despite their contributions to society, the Azmari were historically considered a lower social class. However, this is changing. Respect for contemporary performers is growing both within Ethiopia and abroad.

Fendika’s leader, the incredible Melaku Belay, born in Addis Ababa in 1980, is largely a self-taught dancer who grew up dancing for school performances and at the Ethiopian Orthodox Epiphany festival, Timqat. He later trained at the National Theater of Ethiopia, Ras Theatre, and Hager Fikir Theater, the oldest indigenous theatre in Africa. Melaku has performed internationally with the popular Ethiopian singer Mahmoud Ahmed, the Ethiopian jazz band Addis Acoustic Project, as well as with the Dutch indie band The Ex and the American Ethiopian funk group, Debo Band. Melaku began dancing at Fendika Azmari Bet in 1997, and took over its leadership in 2008, with the goal of demonstrating the creativity and unique identity of Ethiopian traditional art forms.