I wanted to let y’all know about some changes to the RVANews comment policy that we’re implementing over the next couple of days.

First, what was the previous RVANews comment policy? Turns out, we didn’t really have one. The comment section, proudly and prominently featured below each and every article, was a mostly Wild West of anything goes–as long as you weren’t a total bigot. This led to many, many long and arduous comment threads where certain humans (I guess we’ll generously call them that) espoused their mostly insane views about this, that, and the other thing. We let it go on under the banner of Free Speech–which, as you know, is Very Important.

Over the years, our readership has grown and the number of comments left on RVANews has also grown. This has brought with it a directly related increase in snark, vitriol, zzzzzzz, and just plain rudeness. I took a couple of minutes and pulled the last 150 or so comments on RVANews and categorized each one as useful, useless, and rude. Here are the results: 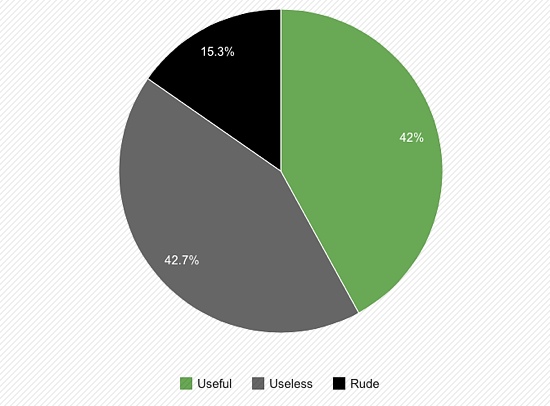 That’s…not so great. Of course, I could have told you this without pulling the data; wading into the comments section on RVANews has felt like crash landing your X-Wing on Dagobah for a while now. It’s gotten to the point where I’m embarrassed by a substantial portion of what’s typed into the little box below each piece.

What causes (presumably) reasonable people to violate all known societal rules of discourse when confronted with an internet textbox and a submit button? When did we decide that frequent rudeness and sometimes open hatred was OK–and possibly encouraged? I don’t know, and I’m just not into it. So! Moving forward, we’re going to do two things:

Comments that are not conducive to an interesting and thoughtful conversation may be removed at the editor’s discretion.

Isn’t that nice and straightforward? I considered something with more heft, like the new Comic Book Resources policy or NPR’s relatively clearer community discussion rules. But in the end, I landed on a policy taken from, of all places, the Creepy PMs subreddit. It reads:

CreepyPMs is also a support sub, a safe space for people who have been creeped on. That means comments that are not conducive to a supportive and positive environment may be removed, even if they don’t violate the rules.

I hope that these two changes, combined with more time spent removing offending comments on our end, will contribute to a more peaceful, thoughtful corner of the internet.

If you’ve got thoughts or feedback you can…leave them in the comments below.