Who: Matana Roberts with Glows in the Dark and Fight the Big BullWhen: Friday, May 22, 8:00pmWhere: MUSE Creative Workspace, 6 N. 19th St., Shockoe Bottom, Richmond, VACost: $10Ages: ALL AGES!!! photo courtesy of M.L. Parts Says Scott Burton of Glows in the Dark, I’m very happy to announce that with the cooperation of the […]

Says Scott Burton of Glows in the Dark,

I’m very happy to announce that with the cooperation of the Richmond Jazz Society, Ipanema Cafe, RVAjazz, and RVANews we are presenting a night of forward thinking jazz with NY’s rising saxophonist Matana Roberts along with Richmond’s own Glows in the Dark and Fight the Big Bull. MUSE Creative Workspace has been kind enough to open their doors and allow this event to happen. As the artist producing this show with serious help from RVAjazz, it’s been great working with everyone to make this event as awesome as possible. In the wake of the RVAjazzfest, it’s great to see the interest and trust! Now, ‘What’s the deal, who are these people?’ I’m glad you asked!

“Ms. Roberts, with her bold and declarative saxophone sound, seemed to be striving not toward virtuosity, but a kind of vocalization.”
-NY Times

”…there are some things that just can’t be told after all; they have to be experienced.”
-NY Times

”…has coalesced her music and family history, creating a sort of living, breathing musical family portrait.”
-Time Out Chicago

In 1998, on a pure procrastinational whim, Chicago-born, Brooklyn-based saxophonist/composer/sound conceptualist Matana Roberts entered her mothers maternal family name into an ancestral website run by the Mormon Church (familysearch.org), expecting as with most African American Ancestry to find a void of complete nothingness. Instead up popped the marriage certificate of her maternal great grandparents, two people of African, Irish and Native American ancestry, born as slaves, married as freed people in Fayette, Tennessee, in 1872. Three years later Matana relocated to New York City looking for a different shade of creative inspiration, mind-bending challenge and risk taking artistic growth and personal interrogation that she felt was of a different breed in her hometown environment, not realizing that with the precious info she stumbled upon in 1998 she was already carrying the key to invigorating her own artistic transcendence.

In 2005 Matana begin experiencing a deep creative depression about the scope, boundary and possibility of her chosen art form. Coincidentally her maternal grandmother, griot of the family and archive keeper died suddenly. Rifling through her grandmother’s left belongings, on a visit home, she found mountains of legal documentation and personal mementos of her family’s history going back to before the Louisiana purchase. Inspired by these finds, Matana decided to redefine her use of the American jazz art form and use it to deal with the grief of her family’s loss, and the confusion she felt over the dullness of her artistic path as a tool for personal artistic interrogation. Through further ongoing research she has uncovered a family narrative that is enriching her creative life beyond the scope that she originally imagined it fostering.

COIN COIN is a blood narrative in blacks, browns, reds and blues……    CoinCoin is a patchwork sound quilt broken down by the defining moments of one group of peoples’ shared history. It tries to pay homage to lives past but that have amazing stories worth remembering and telling using the traditions of jazz and improvised inspired music as it’s medium. Through original compositions and various ensemble configurations, saxophonist/composer Matana is pulling together tales of 7 generations of her own colorful ancestral lore that spans at least 4 continents in order to paint a musical portrait of an extraordinary, yet classic African American history.   The namesake of this project refers to Marie Therese “Coin Coin,” a woman who is legendary in southern Louisianan American history and folklore and whose “times of yore” influence runs through a segment of Matana’s family tree. A child of West African descended slave parents (her mother was thought to be Ewe royalty that was sold into slavery by a rival tribe) Coin Coin was herself in one short lifetime a slave, an obligatory concubine, a mother of 15 children, 10 of which resulted from a slave union to a French man (all of which she eventually bought out of slavery), a medicine woman, a fur trapper, a community leader, a first rate southern griot, and then later a grandmother of 72 grandchildren, owner of more than 1000 acres of land, and ironically a number of slaves. All of this took place at least 40 years before the Emancipation Proclamation of 1865, and at least over a hundred years before the first waves of the American feminist movement.   Matana Roberts has been hearing the stories of Coin Coin all of her life, along with anecdotes and legends of other interesting men and women who influenced her genetic line that lived hard precarious lives, but died strong in an effort so that their spirits might carry on in the lives of their descendants.

From the heart of French, Irish and British country to the coasts of West Africa, the swamps of Louisiana, the tears shed on marched trails by Cherokee, Choctaw and Chickasaws, to the musical soundscapes of Memphis’s Beale Street, back water Mississippi blues and nomadic hope filled travels to the American Midwest and other lands beyond the spirit crushing “strange fruited” south, Matana breathes a creative life because they all breathed first.   These musical narratives will be directly based on the family tales and folk lore that Matana heard constantly while growing up on Chicago’s fabled “south side.” It will tell the stories and myths of a people that weaved a legacy that grew a tremendous family tree, that despite knarled roots, still remains standing.   Matana Roberts’s “Coin Coin” — in essence — is a musical monument to the human experience.

Matana has been working diligently on this project since December of 2005. She hopes the 12 segment cycle might be complete by December 2011.   Coin Coin is broken down into different ensemble configurations to represent the different chapters in Matana’s family history. (specifically dealing with the American States of Tennessee, Louisiana, Mississippi as well as the countries of England, France, Denmark, Scotland, Spain, Africa and Ireland.) Each ensemble configuration interprets a compositional technique Roberts is developing called Panoramic Sound Quilting. Each Panoramic Sound Quilt is completely unique to each ensemble configuration and is a sound amalgam of written notation, graphic notation, western harmony, and improvisational techniques based on the American jazz cannon, as well as compos

itional techniques unique to the historical period of the narrative section being retold. Some PSQ pieces make use of a form of cyclical sound trancespeak.   There are 12 chapters in the entire cycle.   For this tour Matana will be showcasing COIN COIN:Prologue.   This is the introductory segment for the entire 12 segment narrative written for alto saxophone,voice and visual projections  .

Matana will also be celebrating the self published release of her recent writings on this project– some originally published as part of her recently closed blog project called Shadows of A People. These writings will be published as part of her ongoing zine project about her life as an artist called: Fat Ragged.   Matana’s project COIN COIN segments have been performed in the US as well as France, Canada, Germany, Finand and Italy. She will be taking the Project to Norway in July of 2009.

More on Glows in the Dark: 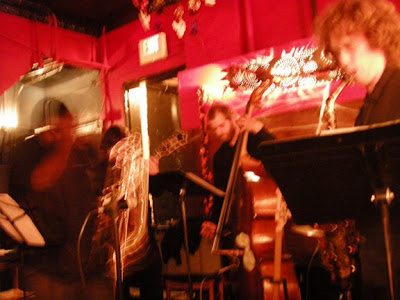 “Good to see that people are dealing with their own music outside of just the major cities and that receptive people are coming out to listen to it.”

-Ken Vandermark, Notes from the Field

Glows in the Dark is an avant garde jazz group based in Richmond, Virginia. Formed in 2007 by Scott Burton as a new outlet for his music, Glows is an on-going attempt to meld jazz and free improvisation with the story telling qualities of movies. The idea is to create music that’s engaging, challenging and always evolving.

So far, Glows has had the honor of sharing the stage with Steven Bernstein, Ken Vandermark and Tim Daisy, Mary Halvorson and Jessica Pavone, Judith Berkson, Aram Shelton’s Arrive, and NY’s Little Women.

Links to the music:

More on Fight the Big Bull:

A spirited congregation of saxophone, clarinet, trombones, trumpet, guitar, bass and two drummers, Fight the Big Bull is a display of spontaneous emotion filled with powerful significance and baptized in the traditions of the music. The band’s recordings have drawn praise from artists such as Ken Vandermark and Steven Bernstein and gained the attention of Portuguese avant-garde label, Clean Feed Records. Dying Will Be Easy, the bands debut effort, connects the group to its rich southern musical heritage. Proud residents of Richmond, Virginia, the band’s music is filled with remnants of spirituals, New Orleans marches, southern soul dance bands, and gospel choirs – all peeking through a kaleidoscope built in the avant-garde tradition. Displaying a very loose and messy aesthetic influenced as much by rock and roll as a deep love of international folk music Fight the Big Bull creates what has been called “… a rapturously chaotic sound.”

Formed in the Fall of 2005 in Richmond, VA, and comprised of the finest that Richmond had to offer, Fight the Big Bull recorded what was to become Dying Will Be Easy in the Summer of 2006. After securing a local bi-weekly gig in the fall of 2006 Fight the Big Bull quickly became a phenomenon in the local music community, honing their live performance into a beautiful chaotic and thrilling mess that appeals to the widest spectrum of listeners. Occasionally showing their exceptional sense of humor as well as unique arranging skills Fight the Big Bull has thrown the biggest and best parties that Richmond has ever seen, hosting a complete cover of the Weezer’s Blue Album as well as covering Michael Jackson’s Thriller on Halloween. In the Fall of 2007 Fight the Big Bull made their debut at the celebrated New York avant-gard space The Stone. In April 2008 Fight the Big Bull was MacArthur Grant recipient and celebrated avant-garde troubadour Ken Vandermark’s guest for a series of shows in Chicago. They have been called “…sonically gigantic”, “great, messy, generous music”, ” the best argument out there for small-market jazz innovation.”, and Timeout NY has called them “… one of the more vibrant jazz ensembles we’ve heard in a long while”. In November Fight the Big Bull was featured on NPR’s Fresh Air and WNYC and Popmatters.com recently named Dying Will Be Easy as one of the top 10 Jazz albums of 2008. A band full of horns and love that you should never ever miss, displaying such a wide palate of emotions that your tin heart cannot escape being moved and featuring the finest members of the Richmond music community, Fight the Big Bull is much more than the sum of its parts and begs more than a passing spin on the hi-fi.

Andrey Henkin – Editor, All About Jazz – New York
“Few bands in recent memory as successfully encapsulate the multi-faceted nature of American music and do it with such engaging sincerity.

TimeOut New York
“… one of the more vibrant jazz ensembles we’ve heard in a long while”
“… a boisterous, gutbucket sound”

TimeOut Chicago
“… a notch above”
“… beastly”

Under the Radar
“Opulent in its brutal decadence”