American Indian Music & Dance Show Kiowa and Comanche Anadarko, Oklahoma As many festival goers are aware, the Richmond Folk Festival grew from the traveling National Folk Festival held in Richmond from 2005-2007, and that “the National,” first presented in 1934, is the nation’s oldest multi-cultural traditional arts festival. Few families have had a longer-standing […] 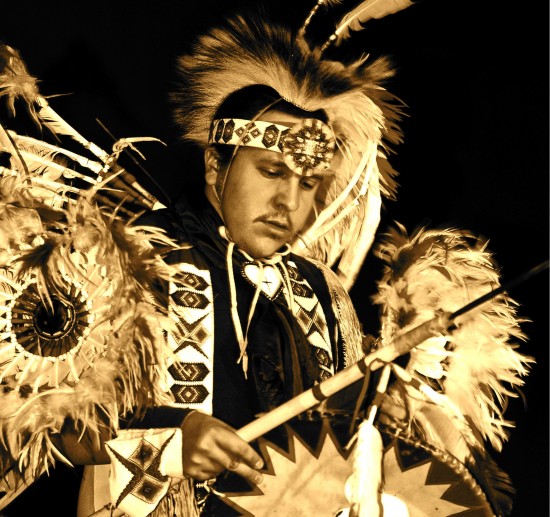 As many festival goers are aware, the Richmond Folk Festival grew from the traveling National Folk Festival held in Richmond from 2005-2007, and that “the National,” first presented in 1934, is the nation’s oldest multi-cultural traditional arts festival. Few families have had a longer-standing tie to the venerable National Folk Festival than the family of Tom Mauchahty-Ware, Director of the American Indian Music & Dance Show. A flute player and composer of Kiowa and Comanche heritage, Tom Ware first participated in the National Folk Festival as a youngster in the 1960s. His father, a champion fancy dancer, performed at the National during the 1940s. His great-uncle, noted artist Stephen Mopope, led Kiowa performances at the earliest Festivals – including the second festival held in Chattanooga, Tennessee in 1935. Now, Tom’s son, nephew, and his three young grandsons perform as members of the American Indian Music & Dance Show. Over the past 70 years, five generations and more than a dozen members of Tom Ware’s family have carried forward and shared their Kiowa and Comanche traditions with audiences across the nation.

Common symbolic themes permeate the repertoire performed by the American Indian Music and Dance Show. Different dances contain imagery alluding to various animals, plants and forces of nature. Everything – from the talons, bones and feathers used in the regalia worn by the Eagle Dancers to Hoop Dance designs that represent birds, butterflies, the earth and the sun – has special meaning and honors the natural world and the creatures that share the earth with us. Tom Ware says, “When we beat on the drum, we don’t just hit a buffalo skin. We are calling the spirit of the animal that died. Our dancing and drumming helps call the spirit of the animal to show them respect.” The lyrics of songs that accompany the dances often deal with these same subjects or the deeds of fallen ancient warriors and recent veterans.

In addition to the Hoop and Eagle dance, the group will perform the Fancy Dance, a more modern powwow standard characterized by intricate and athletic footwork and vibrant regalia. Performances will also include the Grass Dance, a dance meant to represent the wind blowing through the sweet grass of the Northern Plains, as well as the Shield Dance, a dance that originated in the training exercises used to prepare men for hunting and fighting. The group will initiate a number of audience participation dances, including the Children’s Rabbit Dance.