Zero Dark Thirty, or ZD30 as it’s known by the kids, is director Katherine Bigelow’s follow up to her film, The Hurt Locker–which went 6-of-9 at the Oscars in 2009. ZD30 itself is nominated for five Academy Awards this time around. Which is to say: Bigelow is pretty freaking talented.1 Annnnnnd you’re probably gonna want some talent behind the camera when you’re making a movie about the DEATH OF OSAMA BIN LADEN. 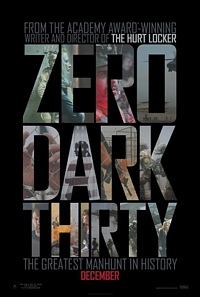 The film’s plot is Titanic-like, in a “the ship sinks” kind of way. The raid on Osama bin Laden’s compound on May 2, 2011 will probably be one of the enduring stories of this generation; everyone knows what happened. And ZD30 is (mostly) faithful to real life events, incorporating actual members of al-Qaeda, the Islamabad Marriott Hotel bombing, and the Camp Chapman attack. The film climaxes with the nighttime raid of bin Laden’s compound in Abbottabad, Pakistan.

The real star is, believe it or not, the actual star: Jessica Chastain (The Help). Chastain plays Maya, a young CIA analyst who’s spent her entire career hunting al-Qaeda and Osama bin Laden. She’s assigned to an office in Pakistan where she’s met by stereotypical, toughguy military dudes (Jason Clarke, Coach Kyle Chandler) and introduced to the brutal world of CIA black-site torture.

Going into ZD30, I wasn’t particularly stoked on the prospect of watching a two-and a-half-hour torture flick. There’s been so much chatter about the film’s supposed pro-torture stance, that I assumed I was in for scene after terrible scene of waterboarding and other creative means of dehumanization all in the pursuit of clues vital to the location of the world’s most wanted man. But that’s not really an accurate portrayal of the film.2 There are several torture scenes. They are brutal and awful. But the film’s protagonist, at least in the early stages of the film, isn’t amped on torturing detainees. She’s uncomfortable, but her obsession with bin Laden quickly outweighs any reservations she has about nearly drowning her fellow man with a bucket of water.

Chastain’s just so, so awesome in this role. She does such an excellent job playing exactly what you’d think a devoted, obsessed, hotshot CIA analyst would be. She’s overconfident, brilliant, extremely focused, and socially awkward. She has no friends, makes awkward speeches that probably sounded better in her head, and generally gives zero shits about anything that’s not finding and killing bin Laden. She’s a classic geek, caught up in an overwhelming situation, and pushed so far to the breaking point that she’s lost track of her moral compass (and maybe doesn’t care?). Chastain slowly and masterfully evolves her character over the course of the film.

In the film, the CIA does end up with a critical piece of information by torturing a detainee.3 In the real world, this is either true or not true (most likely not true). But throughout the movie’s 157 minutes, it’s not torture on display as the primary means of catching the world’s villains, it’s the hard, mundane work of analyzing data. And yeah, the CIA brass in the film rail on Obama for taking torture out of their data gathering toolbox, but you’ll feel no sympathy for them; they look like assholes.

Regardless of your take on the film’s (and America’s) use of torture, you’ve gotta love what Bigelow and Chastain do with Maya’s role. If this movie doesn’t pass the Bechdel Test, it’s only because there aren’t a whole lot of other characters for Maya to have a conversation with. She’s strong, flawed, and relatable. Plus! There are zero romantic relationships involving the main character, and a man doesn’t swoop in to save the day–in fact, a bunch of men swoop out of the picture because, unlike Maya, they can’t hack it.

So is Zero Dark Thirty pro torture? Does it consciously, or even unconsciously, try to persuade audiences that without torture we’d never have caught Osama bin Laden? Maybe. Is that important? Maybe. Is it worth seeing to find out for yourself? Probably!

I mean, this is a movie about torture, terrorism, and violence. If that’s not your scene (which is totally fine), you’ll probably want to find something else to do. Also, dudes, ZD30 is long! What is this 1997? I thought we were over these three hour epics.