If you were born in the 70s and 80s and love video games, Wreck-It Ralph is designed specifically for you. The world of Wreck-It Ralph, like something straight out of Toy Story, is an arcade after the customers head home for the night. When the lights go out, the games’ characters come alive, leave their day jobs of shooting, jumping, racing, or in Ralph’s case, wrecking, and head off to relax. Ralph’s game is called Fix-It Felix, Jr., a kind of Rampage meets Donkey Kong affair, and Ralph (John C. Reilly) spends his 9-to-5 smashing the windows of a skyscraper while Felix (Jack McBrayer) tirelessly fixes the damage. Felix, the game’s playable character, is hailed as a hero game after game, awarded with medals, and showered with the praise of his in-game non-playable characters. Ralph, the game’s villain, sleeps on a tree stump surrounded by a pile of bricks. It’s not the most equitable of situations. 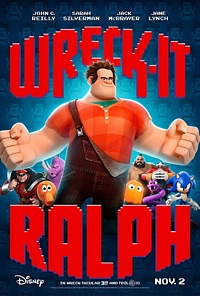 Despite meetings with Bad-Anon (Bad Guys Anonymous)–which is moderated by a ghost from Pac-Man and attended by Zangief, Bowser, and Dr. Eggman–Ralph isn’t convinced that just because he’s a “bad guy” doesn’t mean he’s a bad guy.1 He needs to prove it to the world, and himself, that he could be a good guy if he wanted. Luckily, one night, while drowning his sorrows at the local bar2 he hears of a different game, a first person shooter called Hero’s Duty. Simply climb the tower in Hero’s Duty and waiting for you at the top, is a shiny medal–it even says “hero” right on the thing! Nothing goes quite according to plan, and while Ralph ends up with the medal, he also ends up crash landing in another game called Sugar Rush–a Candyland / Mario Kart mashup. It’s there that Ralph meets Vanellope von Schweetz (Sarah Silverman), one of Sugar Rush’s racers. She nabs his medal, and the two’s fate are entwined for the rest of the film.

Wreck-it Ralph is a movie specifically created for parents born in the 70s and 80s to share with their children. If you’re older, or somehow missed the whole “video game console” thing, you’re gonna miss a lot of jokes and references. And, if you miss a lot of the jokes/references, there’s not a whole lot left for you. Most of the film’s entertainment value comes from spotting the cameos from video game characters of days gone by; guys like Q*bert, Sonic, Ryu & Ken, and Peach all make appearances, as do dozens of others.3 There’s lots of video game culture floating around in the background that makes for some really neat finds throughout the film–enough that you’d never catch them all the first time through.

There’s also a lot of really clever decisions made in the way the characters are animated. It’s kinda meta if you think about it: Ralph is an animated movie about forty years of animated characters. Making each character feel distinct while drawing them all in a similar style was a challenge, I’m sure. The Pac-Man ghost slowly shifts up, down, left, right as he hovers above his chair. The characters from the 8-bit Fix-It Felix Jr., while roundly animated, skip a couple frames of animation, giving them that “classic” feel.

So, yeah. It’s pretty to look at and fun to get the references. Don’t get me wrong, John C. Reilly is excellent and carries the film in his funny, self-deprecating way. But my dad, born before video game consoles, and my son, born into a post-console world, missed many (most?) of the inside jokes,4 without which the film is pretty hollow.

My son JR had lots of thoughts about our experience at the movie theatre, mostly he wanted to talk about the preview for Oz: The Great and Powerful. But he also had some insight into which superhero Ralph reminded him of and whether or not he’d recommend the movie to his friends. In fact, here are his thoughts straight from his snotty, head-cold infected face:

You are Shigeru Miyamoto. Honestly, if you’re Miyamoto you’d probably make your ticket price back in the royalties you’d get from watching this thing.

You were born outside of the tiny golden age of console gaming.