Wrath of the Titans: the Titan is wroth

Lavamen, demon guys, and three dimensions–what more could you want from a classic Greek tale? A lot, I guess? So I saw Wrath of the Titans. THAT’S RIGHT.

Listen, it was slim pickings this week as all the real movies took some time off to let Hungermania die down. The choices boiled down to Wrath of the Titans and October Baby. And while I certainly think that any movie about an “abortion survivor” is sure to blow up in the comments, I really had no desire to suffer through two hours of film dedicated to the subject. So instead, I gladly sat through whatever it was Wrath of the Titans was about–in 3D! 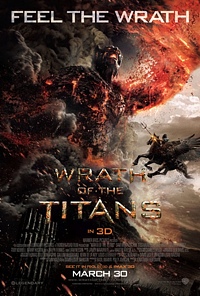 Wrath picks up, according to Wikipedia, ten years after the conclusion of Clash–which I somehow failed to see. The series follows Perseus (Sam Worthington, Avatar), son of Zeus, as he flits about Greece getting involved in all sorts of god-related trouble. In Wrath, he’s retired from adventuring to a small village where he spends his time fishing with his son and pretending his father isn’t the god of lightning.

All is going swimmingly until Zeus (Liam Neeson, Darkman) shows up lamenting his loss of power ever since humankind gave up on the whole “praying to the gods” thing. Zeus warns Perseus that with the god’s power waning there won’t be much left to protect the puny mortals from The Terror That’s Bound in Tartarus (aka the Titan Cronus1). Perseus basically says GTFO to the guy (Zeus, you don’t talk to Cronus like that), but guess what! One of those puny mortals in need of protecting is Perseus’s own son! All it takes is one lousy Chimera attack for Perseus to change his tune, and the adventure to save humanity is afoot!

And oh, what an adventure it is!

Just kidding. The adventure is kind of whatever. Perseus picks up a couple of unlikely adventurepals, Andromeda (Rosamund Pike, Pride & Prejudice) and Agenor (Tobby Kebbell, War Horse), who are both pretty wooden. Agenor has a little bit of potential as he’s got something about him that’s generally likeable, but the script never gives him an opportunity to use it. Andromeda doesn’t do much, but there is one really great shot of her hollering, Braveheart style, at the advancing armies of Cronus. Also Ralph Fiennes plays Hades.

The surprising star of the movie is actually Cronus, a gargantuan animated lavaman who spends most of the movie slumped over in a corner of Tartarus slurping up Zeus’s lifeblood. But man, when Cronus gets to moving it is really something to behold. Guys, it’s a privilege to live in a time when the special effects are good enough that I just accept that, sure, a giant lavaman really could explode out of a volcano and end humanity. Also of special note are the two-torsoed demon soldier guys, who, despite having only two torsos, have six arms.

I guess massive CGI shots are expensive? They must be, because why wouldn’t you just make an entire movie called “Cronus exploding out of shit”? First he’d explode out of a volcano and demolish a sleepy hillside town, then he’d explode out of open-air mall and set a food court ablaze, and then he’d explode out of Florida and sink it into the ocean. It’d make for a fantastic movie. What’s the point of cluttering up the film with plot and characters when all I really want to see is lavamen and demon guys?

And if I’m dropping the extra three fifty to see a movie in the third dimension I want stuff FLYING INTO MY FACE CONSTANTLY. For a movie about stabbing shit with swords, Wrath was sorely lacking in the Protruding From the Screen department. Again, seems like something that would be fairly simple for a movie like this: if it’s pointy or moving it should be headed towards my face.

Do you like good movies and saving money? Then boom! staying home from this movie is definitely for you.