Why you should see the Richmond Symphony this week

Attending a Richmond Symphony performance can be as intimidating as it is inspiring. Here’s some backstory to ponder over as the lights go down, you sit back, and you let your mind wander. Hungary’s song, dance, costuming, jug-beating, and moustache-wearing traditions sure do make ours seem a little stale and sluggish.

This weekend, the Richmond Symphony is making you an offer: come see how Hungary has influenced the socks off the music world. There’s no reason to put up those skeptical eyebrows. The symphony isn’t a code that needs to be cracked. In their day, classical composers were as popular as those kids from One Direction, perhaps leading to their shared taste for questionable hairstyles.

Here’s the rundown on why you should be caring about Bartók, Strauss, and Brahms.1

As such, Hungary’s propensity for churning out phenomenal composers makes perfect sense! It’s Western Europe’s classical melodies with a hint of the exotic East! In fact, its folky spiciness would even crop up in the musical stylings of passionate Austrians like ol’ Beethoven.

Early in the 20th Century, musician and composer Béla Bartók began to collect this rich folk music from his native Hungary and other Eastern European countries. In his compositions, he recycled and sometimes downright stole melodies that, to him, conjured up cultural traditions as well as personal emotions.

Decades and hordes of Nazis later, Bartók and his wife, Ditta, fled Hungary, where Bartók’s views had begun to clash with the ruling regime. The couple landed in New York, bewildered, flustered, and not at all sure what to do with the frenetic pace of their new city.

Shortly thereafter, Bartók started to die. One of his final works, his Piano Concerto No. 3 was meant as both a tribute to and a financial support for Ditta, who as a concert pianist could make a little money off performances of this work designed to show off her skills.

Bartók succumbed to leukemia before the last 17 measures were finished. Piano Concerto No. 3 was both a love song to his wife and a last attempt to capture the unique textures of the homeland for which they both pined.

This weekend, 30-year-old pianist Orion Weiss’s challenge is to bring all of the above to life. Of course you as an audience member, are free to associate this great work with whatever you like. It will at times be anxious and complicated and at other times moving and tender, but at every point, it’s pure Bartók.

By Jove, By Jing, By Strauss Is the Thing

Let Gene Kelly remind you what Strauss is all about:

Johann Strauss: German cultural hero, lover of Hungarian folk music, master of the waltz, and wearer of a sweet beard.

In the late 19th Century, Strauss found himself starting to be a little typecast in the role of Waltzy McGoo (see above video for proof he wasn’t just being paranoid), and he composed the operetta The Gypsy Baron in a striking act of foreshadowing, seeing as how only 105 years later, George Michael, in a similar “screw you” to the man, would release “Freedom! 90.”

The breakout composition, although beautiful, as you’ll hear this weekend, didn’t work for Johann as it did for George. He’ll remain Waltzy forever.

Well, maybe not that kind of Hungarian folk music. But swirling, chaotic gypsy music tickled his fancy. Cue the Hungarian Rhapsodies, which you’ll hear this weekend.

Brahms didn’t have too much time to get into trouble as a young man due to a busy schedule of playing instruments, composing music, and being handsome: 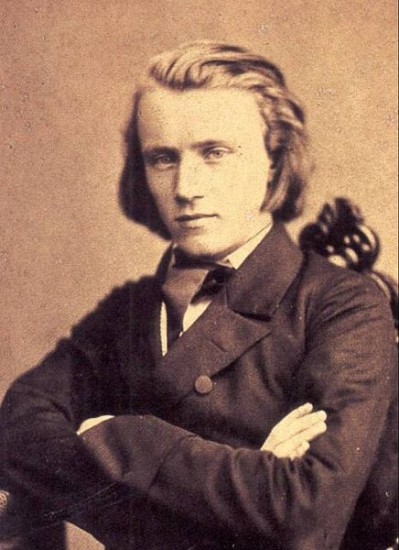 In his later years, he hung out with Strauss (see above), Schumann, Schumann’s wife (scandal??), and Dvo?ák. These Hungarian Rhapsodies earned him a pretty penny, as, it turns out, everyone else likes Hungary’s influence as well.

The Richmond Symphony performs Hungarian Inspirations this Saturday at 8:00 PM. Tickets are available here, from $10-73