We Need to Talk About Kevin: Do we ever

What’s worse than watching tragedy strike your kid? Watching your kid be the tragedy that strikes other people, starting with yourself. My post-theatre phone call with my husband about We Need to Talk About Kevin went something like this:

Yes and no, Him. Yes and no. The two films are more alike than you think. There’s no feeling of adventure, no sense of sticking it to the man, and no thrill of victory in Lynne Ramsay’s adaptation of the Lionel Shriver novel. And there’s certainly, certainly no romance. Love flares up in moments so rare and fleeting during the film that you find yourself desperately clinging to them, hoping as the main character Eva (Tilda Swinton) hopes that they’ll indicate the turning of tides for the Khatchadourian family. But even as you strain for clues that the stiflingly troubled atmosphere is lifting, you know it’s hopeless. You’ve seen Eva’s future as a haunted woman who sleepwalks through life, silently removing the red paint splattered all over her house and holding her cheek after a neighbor slaps in the face. You know nothing will get better for her, but you’re interested to see how all these fragmented flashbacks will transform a fashionable, successful travel writer into a trapped animal. 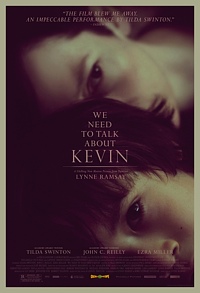 Ah, the joys of motherhood! It’s Eva’s son, Kevin, who has caused all this misery. The kid began as a screaming, inconsolable baby — nothing too unusual on its own, but for Eva, Kevin’s tendency to calm instantly in the arms of her husband, Franklin (John C. Reilly), felt like a manipulative move from the start. As a toddler, Kevin refused to talk. As an older child, he refused to be potty-trained. At first you doubt that he has nefarious motives, as Eva’s perspective is none too reliable. She never wanted to be pregnant, was impatient with her colicky baby, and tells her toddler flat-out that she used to be happy before he came along. But as Kevin gets older, his inherent badness is unmistakable. By six, Kev is not only adorable, he’s diabolical. And not in a crazy, “oh no I’ve birthed a demon” horror movie way. In a studied, relentlessly cruel way, as he does everything he can to make his mother miserable and drive his parents apart.

By the time Kevin is 15, he’s a monster–a psychotic sadist who, we learn almost instantly, is now behind bars. The film takes awhile to tell you about Kevin’s Very Bad Crime, hinting at it with repeated shots of Eva driving amid flashing emergency vehicle lights towards the obvious scene of a tragedy. The scattered structure does more than build tension, it gives us a glimpse into a broken mind. And we’re hooked right from the start. Why does Eva take the abuse hurled at her from her neighbors and colleagues? Why doesn’t she start over in some other town?

You’ll figure it out. Probably in the middle of the night, while you’re awake going over the film again and again in your head. It’ll dawn on you that Eva is still a mother, even when her child has done the unthinkable.

So…what did Kevin do? If I told you, I’d steal his thunder. His tour de force, he claims, is just giving the people what they want: a horrible spectacle to talk about at work the next day.

…And so, we’re brought back full circle to The Hunger Games! Kevin’s heinous finale is meant to point out that the existence of that same social trend that directs the lives of Katniss and company hundreds of years in the fictional future: desensitization to and fascination with gruesome, gory events. There’s an arena, there are arrows, there are casualties. Suzanne Collins’s fictional dystopia is pretty close to Kevin’s. In this film, there are no districts, only the capitol. We’re the capitol, you realize, and the implications are beyond unsettling.

Though at times torturous to watch, We Need to Talk About Kevin is a disturbing, gut-wrenching, and brilliantly made film featuring incredible acting talent and inspired direction. There are so many points to ponder and themes to consider that it’s bound to occupy your thoughts for weeks.

Home is where your wonderful, non-sociopathic children are. Hugs all around!