Warm Bodies: Man is the real…wait, no, skeletons are the real monster

Just when you thought we’d plumbed the depths of the paranormal teen romance Warm Bodies hits a theatre near you! Just when you thought we’d plumbed the depths of the paranormal teen romance (which, no joke, is an entire section at Barnes and Noble), Warm Bodies hits a theatre near you! I mean, we’ve got the Vampires, the werewolves, then came the trolls, and now, zombies. I swear, what’s there left to be romantically attracted to? I…can’t think of anything?1 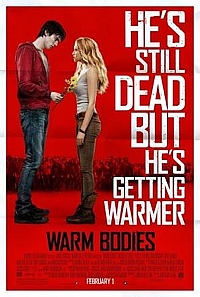 Picking up where such classics like Underworld and Romeo + Juliet left off, Warm Bodies is the story of two mismatched lovers: a zombie and a (living) human. R–he can’t remember the rest of his name, how he died, or how he got the zombz–shambles about the post-apocalyptic remains of an airport. Life’s pretty boring and consists mostly of the aforementioned shambling, some bumping into of things, and eating a human brain once in a while. And avoiding the skeletal Bonies.

While zombies are mostly dead the Bonies are all dead (there’s a big difference between mostly dead and all dead). Even though R’s (Nicholas Hoult, Skins) internal functions have ceased…functioning, he still is slightly alive. He hangs out with his best friend Marcus2 (Rob Corddry, Hot Tub Time Machine), he listens to records in the airplane that he’s converted into his apartment, and he wonders why things can’t be different. The Bonies kill and eat, that’s about it–you’re gonna want to steer clear of these guys.

The humans–what’s left of them–live similarly boring, shambling-oriented lives barricaded behind a wall and protected whatever remains of the military. And by John Malkovich!

On a scavenging expedition–brains for the zombies, medical supplies for the humans–R meets (human) Julie in that classic “eyes lock from across the room as I eat your friend’s brains” kind of way. It’s love at first sight–for R at least. For Julie it’s more pants-pooping fear. R’s saves Julie from certain brunchdom and brings her back to his airplane apartment. If you were born in the last 420 years, you can probably guess where things go from here.

Warm Bodies has a pretty good gimmick: an undead corpse with the inner monologue of a young, slightly awkward guy trying to impress a pretty lady. Hoult play a convincing zombie,3 and his inner monologue is pretty funny. A lot goes into young love, and the contrast between what R wants to do and his zombified execution of things are the movie’s best parts; there are some excellent one-liners.

But I wish there were more one-liners! The movie’s pacing is so slow and methodical, which is either a genius move, because, hello, zombies are slow and methodical, or it’s a missed opportunity. I’m telling you, Hoult absolutely kills a handful of moments and totally out-funnys Corddry.4 I HUMBLY REQUEST MORE OF THESE MOMENTS. Warm Bodies is also pretty self aware and gets in some good jokes at it’s own expense and at the expense of the zombie genre in general.

And just wait until you witness the love scene! You haven’t lived until you’ve seen a zombie love scene.

JK JK, there’s no zombie love scene. OR IS THERE!?

Because zombie movies are great, and this is the first fresh take on a zombie film since 28 Days Later. Also, because Dave Franco plays a supporting role, and you’ll spend the whole time being like “man that guy sure looks like James Franco!”

Maybe that’s a reason to stay home? I dunno.

You have an extreme fear of skeletons or subpar computer-generated skeletons. Or maybe you’re just a big fuddy-duddy?