Upstream Color will leave you filled with feelings and question marks. Upstream Color’s official release date was April 5th, 2013. You, a person who presumably spends most of their life living in Richmond, could have gone to a theatre1 in Richmond and seen this film just a couple of weeks ago. This is a movie that was only in 43 theaters in the entire country playing right here in RVA. That’s such a big deal and such a reversal from just a couple of years ago when we didn’t even have a first-run movie theatre in Richmond City. Good on Bow Tie for bringing a movie like this to our city!

Buuuuut it was only showing for a couple of days, so you’ve missed it. 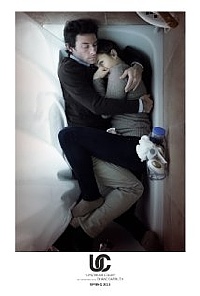 Luckily, you can find Upstream Color on iTunes or Amazon Video right now! I guess one of the perks of releasing a movie independent of a major studio is that you can pretty much do whatever you want? And Director Shane Carruth (Primer) really takes that whole “do whatever you want” thing to heart; he’s the film’s producer, director, writer, co-star, cinematographer, editor, he wrote the music, and he even operated a camera. That’s pretty impressive for a movie that totally does not suck.

So what’s UC about? It’s hard to say. It’s definitely about identity. And probably about relationships. And maybe about community. Oh, and psychotropic worms that when eaten put you in a state of deep hypnotic suggestion. There are also pigs involved. It’s weird, definitely. Weird but also awesome, so very awesome.

Like Carruth’s Primer, a movie about time travel, UC’s storyline isn’t exactly linear, and it isn’t exactly sequential. Its pieces float in and out with dull, fuzzy edges that fit together into something beautiful–but you kind of have to stare at it from a few steps back. And honestly, that’s probably going to frustrate a lot of people. You’ll most likely walk away with a lot of questions about what happened and to whom in UC, but that’s kinda the point. If you were so inclined you could most likely find thousand and thousands of internetwords written about how if you squeeze them just right, all of those fuzzy pieces will fit together in a nice and orderly way. But man would you be missing the point.

Listen, not to continue gushing in a weirdly emotional2 way, but the whole thing really is this amazing audio-video experience that washes over you3 at an incredibly gratifying (at least for me) pace. I can’t recommend it enough and am super bummed that I didn’t make time to see it in a theatre. Even sitting in my basement watching it over iTunes made me feel feelings, and days later I can’t stop thinking about it.

This is a movie basically made by one dude, and it totally rocks! When was the last time you made a thing all by yourself that totally rocked? Never, probably.

Why you should stay away

The first act is kind of…intense. If worms crawling under someone’s skin and parasite removal are things that will give you nightmares for weeks, maybe skip this one (but you are seriously missing out, guy!).