We’re living in the Dark and Serious(ly boring) Age of comic book movies. The Wolverine is bookended by two of this summer’s more ridiculous scenes. It opens with Logan mercy-killing a grizzly bear after some dishonorable hunters failed to properly put the animal down. The bear looks at Logan with it’s large, plaintive CGI eyes. Logan mutters, “Don’t make me do this, friend,” his voice full of regret. The music swells as they gently kiss–no, just kidding, but they might as well have. The Wolverine ends in Nagasaki, with Logan, after defeating the villain, yelling “You wanted to say goodbye? Well SAYONARA!” And those certainly aren’t the script’s1 only cringe-worthy moments. 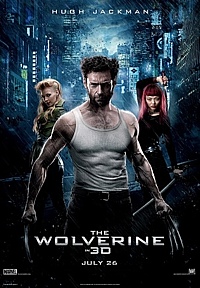 In between, a plot (or at least the semblance of a plot) unfolds that takes Logan (Hugh Jackman) to Japan to confront his past as he faces his future, or something. After leaving the X-Men (see: X-Men: The Last Stand), Logan’s been living in Alaska up north, moping around, growing beards, and acting like a moody teenager. After the whole (overly sentimental) grizzly bear scene, a girl (Yukio, played by Rila Fukushima) bearing a samurai sword shows up to take him to Japan. An dying man that Logan saved many years ago wants to say thank you, and he wants to do it in person. Logan ends up embroiled in some serious family drama that involves the yakuza, corporate backstabbery, and numerous ninjas. As he finds love he…finds himself. No seriously, that is the plot.

And that plot feels mostly like an afterthought–something to wrap around Hugh Jackman’s muscles as he broods and angsts his way through the film. Which, sadly, is where we are with most comic book movies. The Wolverine, like almost every other contemporary superhero flick, suffers under the indelible mark left by The Dark Knight: everything’s so serious.2

For a quick second, this was pretty OK. Christopher Nolan’s seriously dark adaptation of the caped crusader was a welcome change after the run of terrible, but colorful, 90s-era Batman films. But now everything is seriously dark, and with no contrast everything is starting to feel seriously flat. Don’t get me wrong, I’m not saying Wolverine should be played by Jack Black.3 He’s a dark and angsty character (Wolverine, not Jack Black), I get it, and I’m into it. But it’s great source material and deserves a great movie, which The Wolverine is not. Here’s the truly depressing part: freaking Darren Aronofsky (Pi, The Wrestler, Black Swan) was originally supposed to direct the film! Augh, what could have been!

But the film’s not 100% bad. I do have to admit the the kung fu4 in the early goings of The Wolverine is good. Yukio deals some beautiful damage throughout using whatever weapons are lying about–or just her tiny, tiny fists. She’s light and refreshing to watch after a summer filled with dudes crushing buildings with the bodies of their foes. Even bulky ol’ Jackman gets in on the action by sailing across some ponds and showing some agility on the requisite Fight Scene On Top Of A Train. The acrobatic combat is a welcomed evolution from Logan flying through the air to explode a helicopter with his fists.

And what of the future of comic book movies? Shows like the Ultimate Spider-Man, Batman: The Brave and the Bold, and The Super Hero Squad Show give me hope. They are proof that a class of truly brilliant and hilarious writers can turn out wonderful superhero scripts that appeal to just about everyone. Let’s hope some of that makes it to big screen.

You’ve seen the rest of the X-men movies?

Despite the PG-13 rating, The Wolverine is incredibly violent. There’s not a lot of blood but there’s an insane amount of stabbing, shooting, and malicious wounding. There’s also a scene lifted straight from The Gauntlet, but with arrows instead of bullets and Logan instead of a bus.

Nope, not even close.