The View from Here is Fine

The View From Here is Fine, Chris Milk Hulburt’s show of new works, opens at Ghostprint Gallery in a preview reception on Thursday, February 3. Hulburt describes the show as being less “traditional,” than his last, comprised of large panels, asymmetrical pieces, and wood cut-outs bolted to the paintings themselves.

The View From Here is Fine, Chris Milk Hulburt’s show of new works, opens at Ghostprint Gallery in a preview reception on Thursday, February 3. Hulburt’s first Ghostprint Gallery show, Nickle (2008) depicted the late summer, early fall colors of the outside world with bright and vivid river scenes. In contrast, this show depicts an intimate feeling reflected in more indoor scenes and the use of cooler colors — befitting the winter season.

This collection also represents the personal growth and development of Hulburt as an artist: his current painting style comes from a quiet, introspective place. Hulburt also describes the show as being less “traditional,” than his last, comprised of large panels, asymmetrical pieces, and wood cut-outs bolted to the paintings themselves. 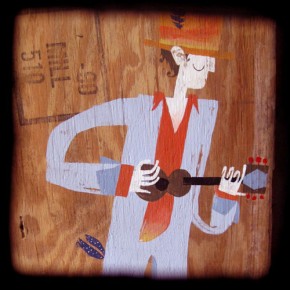 Over a cup of coffee at Lamplighter, the artist explained to me that his current process relies less on sketches than in previous years. Rather, Hulburt allows the paintings, works of house paint on found wood panels, to create their own trajectory as he reshapes one figure into something completely different, at times altering the entire meaning of the piece. His Oregon Hill home also functions as his studio, so he’s constantly surrounded by his work: “If a painting sits around long enough, I’ll get bored with it and alter it in some way.”

To Hulburt, the process of getting ready for this show was one of last-minute tweaking. He expressed to me how he appreciates that aspect of the show: “It puts me in the audience…where I get to be surprised by the end result.” Such is the attitude that Hulburt takes toward all of his art: “it’s designed to keep evolving…until someone buys it.”

On February 25, Ghostprint will host Huckiddy Puppet Theater, a collaboration between the artist and his sister, Cat Hulburt. The puppet show compliments the spontaneous nature of Hulburt’s art by featuring a collection of original songs and improvised banter between brother and sister that the artist describes as, “harmonious…antagonistic, and very, very loving.”

Hulburt explains that his show focuses largely on musicians and entertainers, stemming from his lifelong attraction to the world of the performer. Puppetry and painting allow Hulburt to pay homage to his inspirations while remaining behind the curtain, a position that’s much more comfortable for the self-described “stage-shy” artist. Friends and guest musicians Ed Trask, Bob Miller, Tom Brickman, and Chris Ramming will join Chris and Cat for the performance.