The Spectacular Now: Youth is wasted

Somewhere between Rebel Without a Cause and Can’t Hardly Wait, this film will hit you in all your soft spots. People will tell you that The Spectacular Now is a coming of age story, a teen romance, a high school drama, and maybe it is. But next to the iconic teen films of recent decades—The Breakfast Club, American Pie, and whatever the Aughts brought us1—this film feels more like Jarhead.

That is to say, director James Ponsoldt makes an enormous effort to keep his characters and his setting as realistic as possible, which, turns out, doesn’t include a lot of dick jokes and perfectly placed lip gloss.

There is, however, a virginity-losing scene. And there is a prom. And various parties.

But also a haberdashery owned by Bob Odenkirk! Didn’t see that one coming, did you! 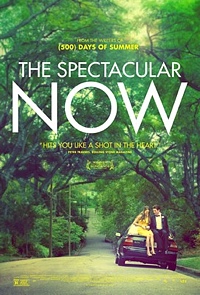 Filmed in Ponsoldt’s hometown of Athens, Georgia,2 The Spectacular Now is full of dilapidated strip malls, cricket sounds, sweat stains, freckles, and humidity so thick you can practically see it. Sutter Keely (Miles Teller) and Aimee Finecky (Shailene Woodley) dress like regular 17-year-olds, and if they’re wearing makeup, I can’t see it. Their unstyled appearance is backed by dialogue that’s flat-out familiar—awkward, unfunny jokes, trailing off at the end of sentences, lots of “you knows” and “ohhhh, it’s OKs” and “hahahaha awesome awesomes.”

Sutter is a self-proclaimed life of the party, a guy who is constantly drinking, charming his way out of doing homework, and looking wistfully at his ex-girlfriend Cassidy (Brie Larson). She’s recently left him because of his tendency to not weigh consequences, which is one of the very few things about the movie that doesn’t feel particularly like something a teenager would do.3

He’s bummed, mostly because “everybody loved them together,” but after a bender one night, he meets Aimee. She’s a nobody, and at first you think that this is almost certainly going to become She’s All That. But there are no makeovers! No subtle losing-of-the-glasses and applying-of-the-eye-makeup. And on his end, Sutter’s not even the successful popular guy, not really. And he’s certainly not some Freddie Prinze, Jr. hunk. A regular teen movie would put them in ironclad roles of quarterback and mousy alt-girl. They’d break them down adorably over the course of the film, and gradually cast aside their Doubting Thomas friends in order to be together at the end. Then there would be an amazing ensemble finale, probably at graduation or a party after graduation or maybe at prom. Oh, and there’d be some sort of bonfire at some point.

The storyline of The Spectacular Now is both simpler and more complex than that.

Both Sutter and Aimee have some real family issues to work out, and they’re genuinely supportive of each other’s efforts to do so. In the meantime, we watch Aimee as she’s swept off her feet by a guy who seems to genuinely feel for her and has no problems saying so. They’re both a little confused, and their courtship evokes feelings of relief and alarm in those of us who once were teenagers. It’s sweet how much Sutter seems to care for her Aimee, but it starts to become clear that she is no match for him. Her naive little heart opens completely to him, and we’re not at all certain what he plans to do with it.

That’s the point, though. He has no plans. Sutter’s exasperating philosophy is that we should all live in the now, and that’s the very Problem with Teens These Days (or at least, that’s what older people probably always think). Trusting, starstruck Aimee seems poised to go down with him without a fight. She’s so close to effing up her own possibly bright future that you want to reach into the screen and shake her, but at the same time, you get it. At least, I did. A well-liked kid who is free with compliments and unafraid to have you by his side, while all the time harboring a sadness that you just might be able to brighten—that’s kryptonite for insecure teenage girls.

Alcohol is Sutter’s poison, but The Spectacular Now isn’t just about addiction. It’s about recognizing that you or someone else is going through a struggle and doing what you can to stop it. And, the most difficult thing of all, it’s about trying hard to make sure your struggles don’t tear down other people.

Sutter and Aimee will get under your skin in a way that you won’t recognize immediately. Their situation, while explosive at times, had a slow burn effect on me. Possibly, this movie isn’t a teen movie at all—not about growing up, coming of age, anything like that. Fear and codependence plague us throughout our lives, but it’s almost easier to study it in the petri dish of high school. The Spectacular Now offers us a simple story about a really difficult thing. It’s not beautiful, but that’s life.

You enjoy feeling a range of emotions.

You were considering bringing a flask with you into the theater. Wait, this is also a reason why you should see this movie. Just…get a ride, man.

Sadly, it fails. Some conversations are implied, but don’t actually happen on-screen. It’s a shame, as Aimee’s relationship with her mother sounds like it has something to it, but the only family we get is Sutter’s.