The Secret World of Arrietty: girls can have adventures too

What’s the secret of the Secret World of Arrietty? It’s that girls are awesome, pins make excellent swords, and cats are mean (sometimes)! Well, Mellisa McCarthy didn’t win the Actress in a Supporting Role Oscar for her work in Bridesmaids, and the film didn’t win Best Original Screenplay either. Color me superbummed. Finally an uproariously funny movie written by and starring hilarious women, but it gets passed over for Midnight in Paris! Disbelief! It’s Important and Good (and unfortunately, rare) to tell these stories with female protagonists whose problems aren’t conveniently solved by the male love interest. So listen Hollywood! You should recognize these movies as Important and Good with your contrived1 awards system!

While Bridesmaids isn’t geared towards kids (even though the poop jokes would absolutely kill them), there are some great stories out there which are appropriate for younger folk featuring interesting, smart, dangerous, and powerful characters who happen to be women. The greatest of all of these is probably Avatar: the Last Airbender,2 a Nickelodeon masterwork about some kids with super powers getting together to save the world.3 Half of the unlikely heroes are girls, and the show’s scariest, most demented villain is a girl. The Hunger Games, which hits theatres March 23rd (so there’s still time to read the books!), fits this bill too and was one of those books that I was sad to finish because it was so good. 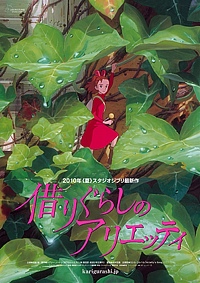 Because I love these sorts of things, I’m always game to watch movies like The Secret World of Arrietty–even when it means waiting in line with a gaggle of tweens who are really–and, it turns out, rightfully–excited about Arrietty and her secret world.

I had never heard of the The Borrowers, but I’m assured they’re a set of charming English novels by Mary Norton, written in the 1950s. The Borrowers are tiny people who live hidden away in our (aka Human Beans’) homes and “borrow” items we might not necessarily miss: needles, tissues, sugar cubes, etc. The film adaption, which was just released last week in the US, is neither new nor English, but a 2010 Japanese animated feature from Studio Ghibli. You might think you’ve never heard of Studio Ghibli, BUT YOU WOULD BE WRONG. They’re responsible for just about every popular anime that has gone mainstream in the States: Ponyo, Howl’s Moving Castle, Spirited Away, and Princess Mononoke. I love the style of Studio Ghibli’s animation–it’s somehow simultaneously childish and revolting. While it can be heebie-jeebie inducing, Arrietty has toned down the barf/nightmare factor to acceptable levels.

Arrietty, has just turned 14 and is finally old enough to start borrowing. On her first borrowing adventure with her father (Will Arnett) Arrietty is spotted by one of the Human Beans. This is a Big Deal and usually cause for uprooting the household and finding another, safer place for the Borrowers to live (you can’t trust those Beans). Her mother (Amy Poehler) is not happy.

Pairing Amy Poehler and Will Arnett4 as Arrietty’s mismatched parents was a stroke of genius. While Arnett spends most of the movie grumbling monosyllables, Poehler squawks at him, Arrietty, or really anyone/thing that happens to be nearby. In a movie with few words, their dynamic is fun to watch.

And Arrietty is such a fantastic female lead! She’s thoughtful, bright, stubborn, and brave–all the things you’d want out of a teenage daughter. When she finds a push pin, her first official borrow, she quickly appropriates it for a tiny sword. She doesn’t always listen to her mother and father, but she’s quick to realize when she’s made a mistake or in over her head. Just like Avatar and The Hunger Games, Arrietty is a great story told about a character who happens to be female–and who also isn’t afraid to sword fight a rat.

If you’re a Studio Ghibli fanatic, this one is a no-brainer. If you’re always on the lookout for movies to watch with your offspring that don’t relegate women to nurses, teachers, or nagging monsters you should probably check this one out. Also: if you are a tweener OR you like kitties…I’m just saying.

Normally, in this section I list stylistic choices made by the movie that are totally legit reasons to not like something. Well, “the movie was animated” is not one of those things. You can’t dislike movies just because they are animated (or black and white), sorry! I guess if you have a cold, cold heart and hate fun, you might want to stay home. I GUESS. Oh! One totally acceptable reason to skip this movie: THERE ARE SPIDER CRICKETS. No joke! Terrifying!