With The Producers‘ zingy one-liners and (slightly) vulgar comedy, it’s easy to see within the first few minutes that this entertaining musical must be experienced with an open mind. The Producers is a witty Mel Brooks musical about a hand-me-down, Broadway producer and a painfully timid accountant who team up in a divisive scheme to make millions off of a Broadway flop. With its zingy one-liners and (slightly) vulgar comedy, it’s easy to see within the first few minutes that this entertaining musical must be experienced with an open mind.

The first act kicks off with a disgruntled crowd trashing their playbills after seeing another failed Broadway attempt by producer Max Bialystock; storming off downstage, Max insists he will triumphantly return to Broadway. Next we meet the other half of the leading duo, Leopold Bloom, Max’s accountant, who breaks out in a nervous shake if you breathe on him wrong. He pops into Max’s Manhattan office just in time to be shoved into the closet as “Hold me! Touch me!” arrives to play adult games (wink wink) and hand over her investment in Max’s next play. After the little old woman leaves, Leo bursts out of the closet and erupts in a dialogue, eventually declaring his dream to become a producer. With some scheming and persuasion on Max’s part, Leo quits his job and teams up with Max to fulfill his life-long dream.

The next steps? Find the worst play ever written, hire the worst director in the business, $2 million, and hire a cast worthy of throwing tomatoes at. The goal? Produce a play that hardly makes it past the first scene, take the money, and go to Rio! 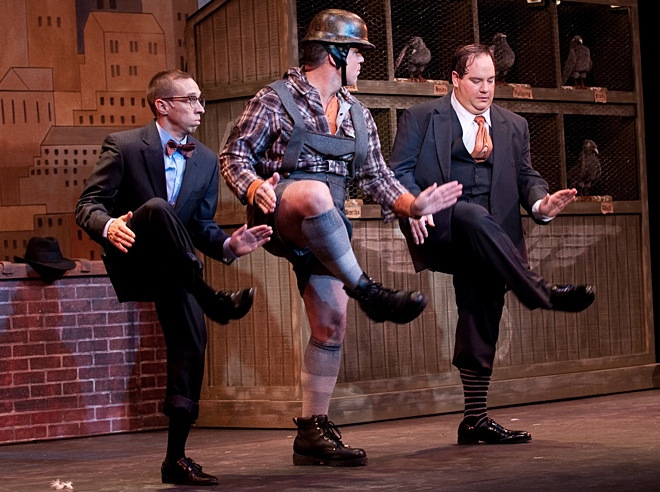 The duo finally find the perfect play amidst their leaning tower of scripts, and after a questionable song and dance session on a rooftop with an ex-Nazi, pigeons, and swastika arm bands, the playwright signs over his play, “Springtime for Hitler: A Gay Romp with Adolf and Eva.” Max and Leo quickly flee the rooftop to visit the “worst director in New York,” Roger De Bris. Upon meeting his flamboyant staff and swaying his decision with the lure of a Tony, Roger signs on as director. Just as Max and Leo begin to discuss casting, they are captivated by an aspiring singer/dancer, Ulla from Sweden, who’s promptly brought on as their secretary. Immediately following Ulla’s hire, a hilarious scene of little old women dancing with walkers in Little Old Lady Land breaks out. After some more adult games, the show is funded.

Act two begins with casting, followed by Max and Leo’s big debut, neither of which turn out as expected. The remainder of the musical is filled with love, betrayal, lust, and redemption–all while maintaining the humor and vulgarity that you’ve grown to love from the start of the play.

Apart from the script, the cast of this Brooks rendition stood out most. It was honestly refreshing to watch a cast that was actually having fun…not just acting like it. All actors and actresses assumed their roles impeccably, but not too seriously (as you’d hope for in a comedy). The leading cast gelled just as much amongst themselves, as they did with the ensemble. Max and Leo, played by Jason Marks and Scott Wichmann, stole the show not through the lines they delivered, but in the way they kept the audience hating, loving, and laughing at them throughout every scene. By the time the show ends, Marks and Winchmann leave you nearly convinced to quit your day job and join in on their next money-hungry scheme (who wouldn’t want to go to Rio?).

Though not perfect, this musical is a must-see. But be careful of the tune you’re humming as you walk out of the theater, you might get some stares along Broad Street singing “Springtime for Hitler, in Germany!”

Why you should see The Producers

This musical just may give you enough gumption to leave your day job and become a producer! Or, it’ll simply offer up a great night spent with a great cast, admiring creative costumes and sets, and laughing out loud at jokes you can’t laugh at with your kids around.

You don’t want to be tempted to go to Rio. Or, you don’t like to laugh.

The Producers runs through January 13th at the Sara Belle and Neil November Theatre. Tickets start at $30 and can be purchased online.