(The New) Oldboy: Why bother? My boy Park Chan-wook, a fantastic Korean director, directed the original Oldboy. This is a guy that’s worked on some really fantastic films—Oldboy, Thirst, Stoker–and you owe it to yourself to explore his body of work. The original Oldboy is incredible. It’s mysterious, heartbreaking, violent, silly, surprising, and insane. It’s original, and if you haven’t seen it yet, you can stream it on Netflix!

Spike Lee directed the new Oldboy. This is a guy who, by all accounts, is also an awesome dude and has directed some really great and important films (Do the Right Thing, Malcolm X). He’s a VCU fan to boot! But new Oldboy is certainly less mysterious, less heart breaking, and less surprising. It’s probably equally as violent, but doesn’t even approach insane. It’s a remake of an existing, fantastic movie, so it’s inherently far from original.

Joe Doucett (Josh Brolin) is a pretty douchey guy. He’s continually drunk, shitty to his ex-wife and child, and an all-around skeezebag. After propositioning a client’s wife at a Very Important Sales Meeting (you can imagine how that went), Brolin stumbles out into the night, drunk yet again, and…wakes up imprisoned in an unfamiliar hotel room. Doucett spends the next 20 years alone inside a single room, fed through a slot in the door, with no hint as to why he’s there. As one might do when imprisoned for decades, he spends his time plotting revenge and working out.1 Twenty years of solitude will do a number on a guy, and when Doucett finally makes his way out of Hotel Jail he’s not the most normal of dudes.

Brolin does a good job playing a semi-psychotic weird guy that’s suffering the effects of long term isolation. He’s quirky and frightening, but he’s still a beautiful, chiseled man. When compared to his Korean counterpart (Choi Min-sik), Brolin’s transition from victim to hero (antihero?) is way less odd and interesting. And that’s most of the film, really. There’s plenty of homage to the original, but it feels empty. Where the Korean version takes huge and rewarding risks, the American version plays it boringly safe.

Don’t get me wrong, this new version is still kinda weird, but you got to wonder why Spike Lee signed on to direct a film that’s so far outside of his typical canon.

You get to see what fat Josh Brolin would look like.

Because you’d rather watch the excellent original.2

There’s one major female character in the movie, and she’s pretty focused on Doucett. So not really. 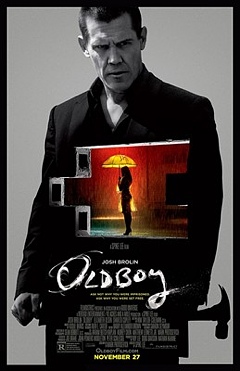