The Master: You’re getting very sleepy

Joaquin Phoenix and Philip Seymour Hoffman provide a soothing balm on the wound that the despicable movies of this summer have opened. But is it enough? IS IT ENOUGH? 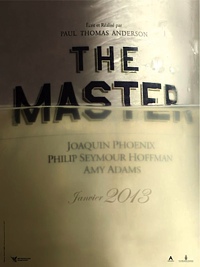 The buzz surrounding Paul Thomas Anderson’s newest film, The Master, hovers around an obvious yet oft-denied reference to Scientology. “It’s about a drifter! A post-World War II drifter!” the studio bigwigs keep claiming. And, sure, the protagonist, played by Joaquin Phoenix, is just that–a seriously messed up former sailor with an irrepressible drinking problem who falls in with a guy everyone just calls Master. Enigmatic, driven, and uncannily adept at reading people, Master (played by Philip Seymour Hoffman) is an undoubtable lighthouse for everyone who is lost at sea in the film. Freddy Quell (Phoenix) can’t really even be described as “lost.” The dude is a self-destructive, chemically addled ball of animal reactions, so it’s easy to see his attraction to Master’s philosophical movement, which claims that the human brain can overcome base emotions and exist on a higher plane via “Processing,” which helps you get to the root of your problems, which probably started in a past life, which can be overcome through a sort of hypnosis, which leads you closer to your “perfect self,” which sounds a whole hell of a lot like some L. Ron Hubbard nonsense.

Scientology is one of those things that occasionally sparks my interest, and I’ll dutifully start to read a couple of Wikipedia entries about it before I admit to myself that, while bizarre, it’s pretty tedious. The Master felt a little like that. Anderson’s elements in themselves were all kinds of interesting: Hoffman exudes confidence with the slightly nervous air of someone who knows their believability is hanging by a thread. And ol’ Joaquin! His Quell is brilliantly done–manic, primitive, snarling, childlike, pathetic, and diabolical all at once. Master and Quell pull each other closer and closer as one satisfies the other’s need for an outlet and order, respectively.

Between the two leading men and Master’s wife, Peggy (a refreshingly severe Amy Adams), the characters make the movie. Thinking about Quell’s dead eyes and sneering upper lip makes me shudder, even though Master’s the one leading all sorts of naive and financially generous soul-searchers on a hapless quest. It’s all very well done, except that it’s…well, like I said. While bizarre, Master’s Scientology-like Cause is pretty tedious. The efforts of Master’s family and friends never quite bring the Cause into any sort of limelight. It’s always kind of silly, and we’re never really meant to assume that any of it really works. Master makes mistakes, is constantly under attack by a lot of really reasonable-sounding experts, and enjoys the perks of the job a little too much.

Freddy’s first attempt at being Processed shocks him into paying attention, and being part of a group that believes he can achieve greatness is enough to keep him tagging along. But his more demanding master, alcohol, keeps pushing him down the path towards violent debauchery.

So with all that fascinating interplay, why did I spend a good chunk of The Master learning how to French braid my own hair?

PTA films don’t always move me, although There Will Be Blood exploded my brain, so I wasn’t stunned to remain un-carried-away by this movie. Maybe it was the fact that no one gets anywhere, or maybe it was the plodding speed of the pacing–either way, I felt like the drift was clear early on, and the rest of the film’s trajectory became a solid plateau. Drinking, not drinking, convincing people, not convincing people…it’s a long 2.25 hours of the same back and forth.

You are enchanted by movies that pretend to be about one thing but are actually about the weird yet influential cult that attracts famous people with a lot of money. Also, you don’t want to miss the BEST LAST LINE IN THE HISTORY OF LAST LINES.

You feel like being entertained, which I can do easily when I come over with a DVD as you teach me how to French braid my hair like a champ.