The Kings of Summer: Out here, it’s our time

Films like Stand by Me set a really high bar for coming-of-age movies featuring boys spending time traipsing through the woods. The Kings of Summer clears that bar just about half of the time! The Kings of Summer is one of those summertime films where boys are busy doing two things, 1) being boys and 2) coming of age. It’s one of my favorite genres and features some of my favorite films: The Goonies, The Sandlot, and, of course, Stand by Me. 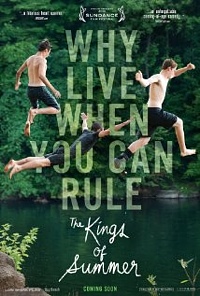 In Kings, Joe, played by Nick Robinson,1 lives at home alone with his dad Frank (Nick Offerman). His mom died at some point in the past, and his older sister has moved out. Joe and Frank have all the typical parent-child tension, but it’s condensed down to one relationship instead of two and exacerbated by the changing shape of their family. They argue, shout, and rage-quit Monopoly games. Joe’s best friend Patrick (Gabriel Basso) also has his share of issue with the ‘rents–hilariously played by Megan Mullally and Marc Evan Jackson. While Joe’s relationship with his father is marked by anger and emotion, Patrick’s relationship with his parents is a slow death of inane questions and senseless requests.

To escape their parents (and reality) Patrick and Joe decide to build a house in the woods. And live there. For just however long, I guess? Kids! Anyway, along the way they pick up a third musketeer, Biaggio (Moisés Arias2), and off they go to build their secret forest hideout. And you know what? They do, and it turns out pretty good, all things considered. It’s after the construction ends that the focus shifts to relationships between friends, girls, survival, wildlife, and growing up.

Kings is director Jordan Vogt-Roberts’s first feature film (after directing a bunch of Funny or Die episodes) and is brilliantly cast with some of my favorite funny people: Megan Mullally, Nick Offerman, and (new favorite!) the weird-looking Arias. The scenes between the kids and their parents are realistic and wonderful to watch (depending on your own parentage, I guess), and any scene featuring Arias is tops. But Vogt-Roberts sometimes gets lost in his own directing, using slowmo, awkward closeups of animals, and an oddly placed montage to give this film a distinctly navel-gazey feel.3

Sometimes a movie sets out to do a thing, and then it does that thing really well. This is pretty rare–most movies set out to do a thing, get lost along the way, end up trying to do three other things, and by the end forgot why they set out in the first place. But some films nail it, and 1986’s Stand by Me is one of those films. Stand by Me perfectly captures what it’s like to be a 10-year-old boy spending an endless summer with your buds, paling around, wasting time, never wanting it to end. Stand by Me sets a really high bar for coming-of-age movies featuring boys spending time traipsing through the woods.

The Kings of Summer clears that bar just about half of the time!

Arias, Offerman, and Mullally are really funny in this film–worth the price of admission, which is, like, so much these days!

Only half of the movie features Arias, Offerman, and Mullally. The other half is spent on pretentious shots of wheat fields and closeups of bees.

No way. A movie about boys hanging out? Come on.