Somewhere within The Dictator is a message about our own culture. Like Bruno and Borat before it, Sacha Baron Cohen’s latest shockfest exposes some unpleasant things about ourselves, but unlike those two films, it’s refreshingly direct about it. In fact, it’s the only other SBC film besides his original Ali G that has a conventional narrative structure. It’s easier to watch, easier to follow, and therefore less surprising than his other films, but there’s a nice little moment at the end where he reveals his point in a politically scathing yet hilariously paced way.

Here is where the pros end! 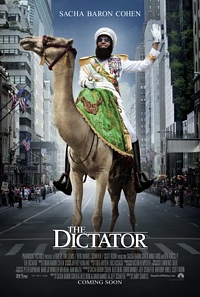 The Dictator is so offensive that it could be used to undo weeks of sensitivity training in a single 90-minute sitting. In fact, its method of offense is even a little confusing. OK, a dictator of a fictional country called Wadiya embodies every dictator stereotype. Do we feel bad about stereotyping dictators? No. OK. Proceed.

This dictator comes into contact with the most tree-hugging of vegan Brooklynites. He’s used to using women for sport, and now he has a short-haired feminist in front of him who he sorta needs to make nice with in order to accomplish his goal (of being a homicidal maniac, hahahaha). He makes fun of her for not being as hot as she could be, but of course, he ends up getting over his hangups about armpit hair and decides that it’s not appearances that matter. So that’s OK, right? OK. Moving on.

We find ourselves rooting for General Aladeen, despite his terrible ways. He does change a little, but not before he’s learned how to “pleasure himself” (in one of the most awkward scenes in cinematic history–just the thought of all the takes involved makes me want to take ten showers), made a billion rape jokes (assault! lol!), delivered a baby by sticking his hand into a woman’s uterus and pulling the infant out (if only that were possible), and, well, pooped on unsuspecting New Yorkers from a zip line strung between two buildings (I might look the other way with that one).

So The Dictator leaves us with a feeling that we’ve just been hoodwinked. I mean, we gave SBC the benefit of the doubt and allowed him to turn the horrific lives of oppressed people into a feature-length comedy, and he couldn’t even make it all that funny. In some ways, that’s a slap in the face. You know how the old saying goes: “If you’re going to make light of tragic situations, hire a good writer to help steer you away from poop jokes.”1

You rewatched the Austin Powers movies lately and you really felt like they stood the test of time. Also, you’re 10 years old and have never suffered under a dictatorship.

Let me put it this way, I wish with my whole heart that I’d seen Battleship instead. Are you with me?