In 2010, The TODAY Show ranked Richmond the third most tattooed city in the country. Now, the Valentine Richmond History Center is set to premiere a new exhibit that will both showcase and catalog many of the local tattoos and artists that earned RVA that distinction. In 2010, The TODAY Show highlighted Richmond in an unexpected way.

NBC’s famed morning show ranked the nation’s most tattooed cities by measuring tattoo shops per capita. RVA came in third. “Perhaps most surprising on our list is the city of Richmond, VA, which averages about 14.5 tattoo shops per 100,000 people,” read the results. “Likely boosting its numbers is its big arts and college community, and the fact that the surrounding suburbs and cities contain plenty more tattoo shops.”

The ranking has popped up on websites and in conversations around town ever since. Later this week, the Valentine Richmond History Center will showcase 100 tattoos created by local artists in History, Ink: The Tattoo Archive Project (disclosure: some of my tattoos are featured in the exhibit).

For those who think that tattoos are an unworthy historical subject, Domenick Casuccio of the Valentine replies “It would be one thing if tattoos were just pictures on peoples’ arms, but they are so much more than that. Each tattoo carries with it a story and a meaning that has the potential to reveal a great deal about the individual who holds it.” Not only will the exhibit feature local artwork, but photographs of the tattoos will be added to the Valentine’s collection of Richmond ephemera, one that totals over 1.5 million objects and artifacts.

To catalogue the tattoos, the museum hired local photographer Terry Brown. Brown said she didn’t add frills to the photography, opting instead to photograph the tattoos “in a more clinical way because the artwork was already there.” Ultimately, she said, “it was about the image.” 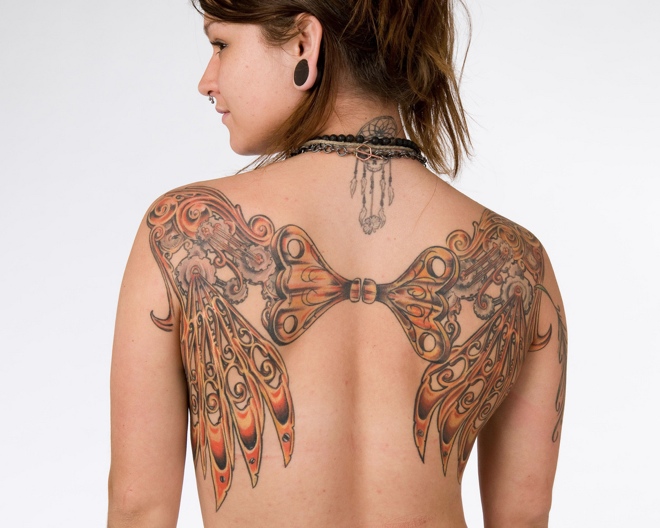 Since January, Brown has taken over 2,000 photos featuring Richmonders of all stripes, from young VCU artists to middle-aged women. She has winnowed down those photographs to 100 for the exhibit.

Brown said many of the tattoos she photographed feature cardinals (the state bird) and represent local heritage. One tattoo depicts a train bridge over the James River on the left shoulder of Matthew Lisk.

“It’s actually a mural that a friend of mine, Nic Marlton, painted on a wall at Carnegie Mellon, where he goes to school,” said Lisk of the tattoo, which was completed in May 2011 by Sihf at 212 Tattoo. “The bridge has become sort of a symbol, in a way, for me and my friends.”

As to why so many in Richmond have tattoos, Lisk believes Richmonders “like to show off what they love, and tattoos are a great way of doing that.” He said that many “seem to have a lot of pride, especially in the city itself,” which in turn inspires RVA-themed tattoos. However, many tattoos go beyond love of the city.

“There are a lot of memorials,” recalled Brown. Among the tattoos she photographed was one on a young woman to honor her brother who died in the 2007 Virginia Tech shooting.

Brown also photographed tattoos on the co-founder of local cab company, Napoleon Taxi and the daughter of Tommy Goulding, owner of Rosie Connolly’s pub and restaurant. Among others featured in the exhibit was a man who had love letters written by his grandparents on his chest and a girl with a portrait of Abraham Lincoln on her leg, with whom she shares a birthday. “Everyone was really accessible,” said Brown about the people she encountered. “They just wanted to share their tattoos.”

While acknowledging that there are many tattoos done by quality artists across the country, Domenick Casuccio said the Valentine “decided to stick with Richmond artists because we felt that works by these artists would hold the most relevance for our diverse audiences who come to the Valentine to learn about Richmond and its unique history.” He said that all people, tattooed or not, will appreciate the exhibit.

“People who love tattoos and already respect the art form will be happy to see some of the best tattoos in Richmond. On the other hand, those who aren’t sure what to think about tattoos will leave with new found respect for the art form after seeing that they can be just as beautiful and meaningful as other works of art.”

Correction: An earlier version of the article stated that a tattoo commemorated the death of a mother to polio. The mother sufferred from the illness, did not succumb to it.