One of the world’s most acclaimed artists is in RVA painting her only works on permanent display in the US. Among Esther Mahlangu’s artistic contributions, the South African woman is one of only 18 artists since 1975 (and the first woman) commissioned by BMW to deliberately deface one of the automaker’s cars.

In 1991, Mahlangu painted geometric ornaments reminiscent of her ethnic Ndebele tribe on a model 525i, a car that would help drive her work into the collective conscious of the art world.

“That car was shown at the National Museum of Women in the Arts in Washington, DC in 1994,” said Richard B. Woodward, founding curator of the African art collection at the VMFA. ” And Esther was commissioned to paint a facade of an annex building that the museum had acquired.” 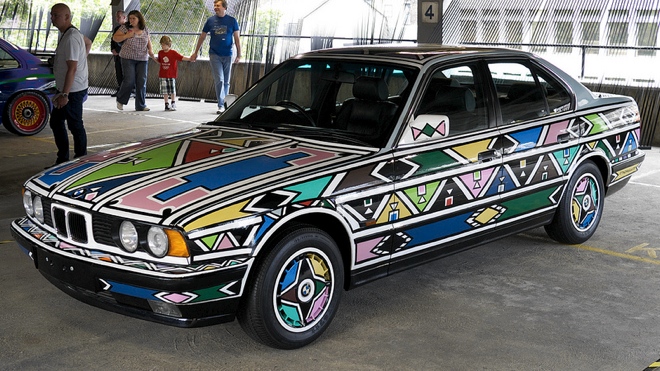 Mahlangu has painted building exteriors and canvases (and cars) the world over, and reshaped the connotations of contemporary art. She’s now working on two 9’ x 15’ murals inside the VMFA commissioned by the museum that will remain in its African art collection in perpetuity. It will be the only work by the South African artist on permanent display in the US.

“Since being a young child, Esther had a will to paint,” Woodward said about the 79-year-old Ndebele woman born in the Mpumalanga province of South Africa. In her native Ndebele culture, painting houses conveys and celebrates one’s local ethnicity. “The painting of the house becomes a statement of identity,” Woodward said.

The art is practiced almost entirely by women, likely passed down when girls became adolescents. Esther couldn’t wait. “She was born an artist,” Woodward said. Her mother and grandmother imparted the craft in the 1940s amid apartheid. 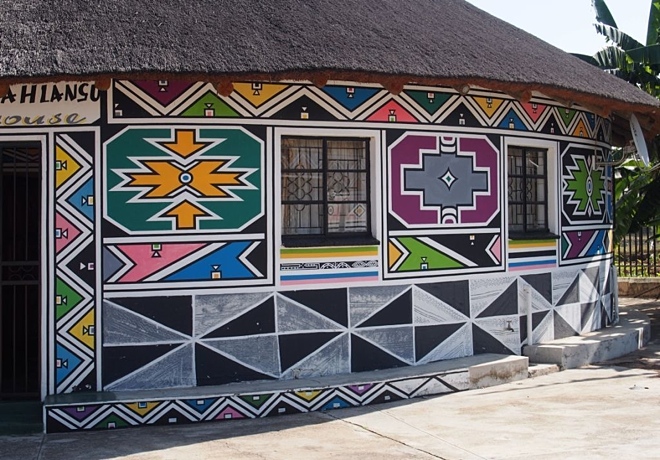 Her international breakthrough occurred in 1989 during the Parisian Magiciens de la terre (Magicians of the World) contemporary art exhibit that showcased under-appreciated artists from Peru, India, Africa, and other countries.

In addition to inviting Mahlangu, exhibit organizers built a replica of her South African home for her to paint. Mahlangu’s work in the 1989 exhibit prompted BMW to offer one of its cars as a canvas. That helped launch the South African artist into further global acclaim, making her a coveted artist whose work has appeared in Australia, Japan, the U.S., and others, including a massive 78’ x 19’ mural at the Bochum Museum in Germany.

“Esther is the person who has taken the local art of design and painting in the Ndebela region and [brought] it to a global context,” Woodward said. “She has spanned the horizon of both painting locally and painting globally.”

For years, Woodward has built the VMFA’s African art collection with artifacts. “The African continent has undoubtedly the longest, continuous artistic tradition in the world,” he said. “More recently, I’ve been trying to bring the envelope forward to include contemporary art…because Africa is still living, and producing, and highly creative.”

Woodward wrote Mahlangu, inviting her to paint in Richmond. Woodward traveled to South Africa to firm up details. “We discussed the concept of the project, and I showed here images of the space she’d be working in,” he said.

That space is the Evans Gallery, and the two 9’ x 15’ murals will serve as a gateway to the museum’s African collection on the second floor. “Ndebele painting comes from a context of architecture. It is the painting of the house. And so I thought it was fully appropriate to create an architectural dialogue” between the Ndebele-inspired art and the neighboring Renaissance gallery.

Although Mahlangu typically paints on exteriors, Woodward instead choose stretched canvas for the artist. “Because in 25 years, the African gallery may be moved somewhere else,” he said. He also knows that museum interiors are seldom static. “They get renovated, and we wouldn’t want to lose these.” The canvases can be moved around the building, or even carried out of it. “I felt that this would be important to give permanence to a major project by Esther, rather than to risk that it would one day vanish.” 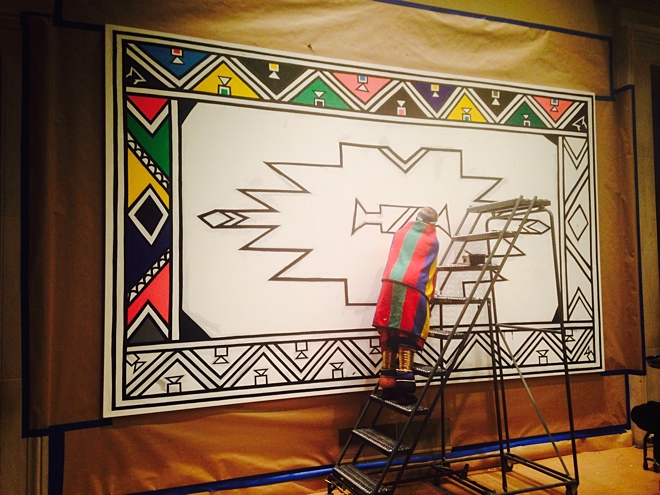 The 79-year-old often works seven days a week, between eight to nine hours each day. “It’s intense work,” Woodward said. “It’s joyful work.” Among Mahlangu’s tools are brushes made of chicken feathers, which she uses for the black lines in her work. Straight lines are hand painted with no straight edge guides.

When not working, Mahlangu has found time to dine at Woodward’s house, as well as local restaurants. “I’m teaching [her] about the way we do things in the United States,” Woodward said. “It’s a cultural exchange in the best sense of the word.”

Mahlangu has finished work on the first canvas, and will begin work on the final mural today. She’ll likely complete the mural this weekend. Visitors are welcome to watch her work. On October 9th, Woodward will engage Mahlangu in conversation through the artist’s translator at an event open to the public.

For those who watch Mahlangu work, and eventually see the completed murals, Woodward hopes visitors gain a new appreciation for the contemporary art Africa creates.

Esther Mahlangu will be painting daily at the VMFA until completing murals, likely sometime this weekend.