So you want to get into dance this month?

Well, now’s the best time. Two big deal events are happening, and you, you lucky dog, are in the prime position to see one or both of them. Don’t think you’re into dance? Wishing you had a cathartic outlet for the beasts inside of you? Turns out, this is the best possible thing for you. Not kidding. This local troupe has Made It Big in the past couple of years, but returns to Richmond to grace us with its presence on Grace Street, which is not just a clever pun. I gushed (as I do) to Amaranth founder Scott Putman about how much I admire what he does, and what dance means to me, the uneducated and inexperienced observer/troglodyte. And he said the following: “I appreciate that you feel that dance is cathartic. I agree. Especially if it is a contemporary approach at weaving concept and movement that speaks to the humanity of us all. Ironically, the work of Amaranth has been labeled as humanity in motion and dance alchemy. It speaks to the human condition by envoking the spirit to take part in the environment and in the telling of the story.”

Let me break this down for you. 1) THE HUMAN CONDITION!! Guys, this is something that we all have, and this company tries hard to turn this universal pull into something beautiful for you to latch onto. 2) SPIRIT, ENVIRONMENT, and STORY! As a completely naive dance enthusiast, sometimes I relish in the fact that I know zero helpful technical things. If anything, I just want something in any of the arts to speak to me in my spirit, relating to my environment, and telling me a story. Oh wait. Done, done, and done.

Or, as Scott YET AGAIN says it better: “The collective company sings the movement into being as sound is one of the quintessential elemental vibrations of all creation.” That sounds like just pretty words, maybe. But the idea of people singing movement pretty much gets to the heart of how I feel about all of this. It’s beautiful, sure, but it is more than that. It is doing things with bodies that music constantly does with mouths and instruments. And that’s something to see. 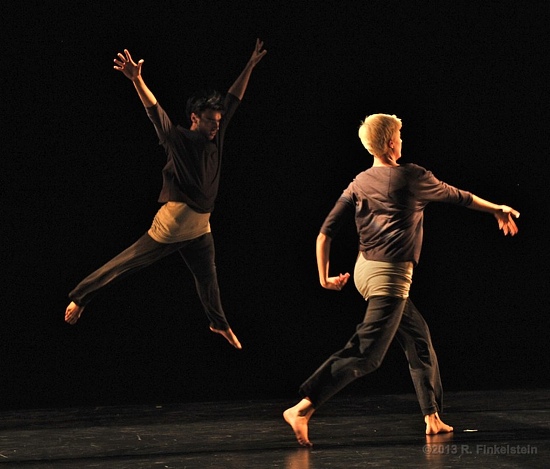 Amaranth’s show, “Falling Back to Grace,” marks their triumphant return to the RVA dance scene. Now that they’ve been around the block/country, Amaranth feels strongly about capturing what they’ve learned and presenting it to our eager baby-bird Richmond selves. Says Scott, “I am really looking forward to sharing all of this new work to the community. It has been some time, and sharing the growth and development both technically and creatively is very exciting for me. Very exciting for the company in general–sharing what we have been up to and telling new stories to the Richmond audience.”

“Falling Back to Grace” began last night and goes through Saturday night. Buy tickets in conjunction with VCUarts here.

A new year, a new crop of insanely talented dancers. This year, four new dancers move up from Richmond Ballet II, the intense, dedicated, and adaptable younger siblings to the Main Company of Graceful Superheroes. These early-20-somethings have paid their dues and then some, working constantly on the road and teaching the entire history of ballet in 45 minutes to unforgiving audiences (particularly hard-sell 5th-graders).

This season’s Studio Series starts off with a world premiere of a piece that finally gets down to brass tacks, telling us why the individual members of our amazing company chose this physically punishing activity as their life’s work. Choreographer Darrell Grand Moultrie’s iNVERSION does a thing that for some reason no one has thought to do before: gives individual dancers an actual voice. Like, with their vocal chords. Every single person I’ve spoken with about this new piece has remarked about its total groundbreaking quality and the thrill of actually getting to literally tell the audience why they’ve gone the life direction they’ve gone. Video and audio set the tone and, arguably, the script, while the dancers physically portray the different nuances of their colleague’s motivation towards their shared goal. 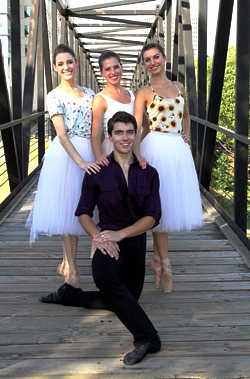 It’s an exciting time for Lauren Archer, Sabrina Holland, Abi Goldstein, and Benjamin Malone. They’ve made the leap from RBII to the company proper, which has had a profound effect on their daily lives. I sat down with them, in a less-than-graceful way, and talked to them about what it REALLY meant to move up within the company.

Benjamin, a 24-year-old from Maine, assured me that “There’ s a lot more up and coming [in RBII] rather than taking care of what you need to take care of by yourself, so a higher sense of independence comes with being in the company, and with that a higher sense of responsibility.” Sabrina, 22, a native from upstate New York, who had been dancing since she was three, concurred: “With RBII, you’re learning everything, but you’re not necessarily performing everything. You know it, but you have company members making sure you know it.”

In the company, they’re not so lucky. But also aware that they’re super lucky in other ways. Said Sabrina, “When you’re performing for younger kids, all you have to do is releve en pointe, and they’re like ‘WHOA, THATS AMAZING!’ So…they’re appreciative in a different way. Versus a mature audience who is appreciative of different and more complicated or emotional things.”

And iNVERSION and the second billed piece, Swipe (a fan favorite) provides a great starting point to people who think ballet is an elite passion involving tutus and buns. “You know, there’s the Katy Perry movie and the Justin Beiber movie…this is kind of like the Richmond Ballet movie. You get to know us and our voices personally,” said Lauren. And why bother getting to know your city’s special dancers? Says Abi, “It’s always more fun if you see a sporting event or play if you know somebody in it. If people come to iNVERSION, they’re more inclined to come back, because they’ll hear us all talk and be in a position to really listen to what we have to say. And we’re all different–some of the reasons my colleagues love to dance are reasons I’d never even thought about. And my reasons are the same for them.”

Between iNVERSION and Swipe, Richmond Ballet stands to make an artistic killing this time, starting of the 2014-2015 season admirably. Catch Studio One starting September 23rd and running through September 28th in the school’s very intimate yet very professional studio theatre. Tickets can be found here..

Best of luck to Abi, Sabrina, Lauren, and Benjamin. May 2015 treat your artistic careers well.